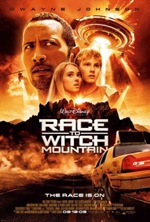 They enlist the help of taxi driver Jack Bruno (played by “The Rock” Dwayne Johnson) and scientist Dr Alex Friedman (played by Carla Gugino) in their race to reach their ship which has been taken by government officials and hidden in Witch Mountain.  Pursued by the government and a cyborg assassin from their own planet, they need to get to their planet in time to prove that our atmosphere  can sustain and regenerate their plant life thus making an all-out invasion and occupation of our planet unnecessary.

There are countless car chases and far too much dialogue comprising of only “go, go, go!” and “come on!” but in the end this is an adequate film that will please (much) younger audiences.  Dwayne Johnson and Carla Gugino are okay, I guess.  I liked the extra sensory powers that the alien children had and I quite liked Alexander Ludwig in this role – he was like a mini Jack Bristow.  Still, I expected the film to be slightly better than this and so I give it 3 stars.