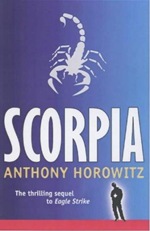 Scorpia is the fifth book in Anthony Horowitz’s immensely successful Alex Rider series.  This is a young-adult series about a fourteen-year-old teenage superspy that is used by MI6 on top secret missions.
In this fifth novel, Alex goes off on a quest to discover more about his father and he gets recruited by Scorpia, the clandestine criminal organisation that his father worked for.
The story is set in Venice and London and it is always nice to visit exotic locations in the Alex Rider books.  The book seems slower and less heart-stoppingly fast-paced than the others in the series but you do find out a lot of information about Alex’s father.
The last two books in the series (Skeleton Key and Eagle Strike) were unputdownable (how can that not be an actual word?) but this was not my favourite book in the series so far.  I look forward to the next book as I am sure Horowitz will dive right back into the break-neck-paced action.
The one thing that I liked best about this book is that Alex’s personality is beginning to emerge and I’m really beginning to like him as a protagonist.  He’s still not as strong as Matt is (from Horowitz’s Power of Five series) but he is definitely beginning to grow on me and remain in my mind long after the books are finished.

I give Scorpia 3.5 stars as it just didn’t hold my attention in the way the previous two books did.  Nevertheless, I still expect great things from the next book in the series.