I discovered two massively talented authors in 2008, namely Garth Nix and Anthony Horowitz. I picked up books from each of these authors as I was looking for some light reading over the summer holidays and while aimed at the young adult market, I have found myself tearing through their books ever since. 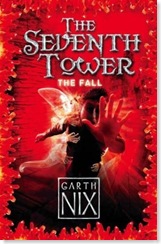 I'd always hesitated to pick up The Seventh Tower series as the books were to be found in the children's section (as opposed to the young adult or teen sections) and I had read at Amazon.co.uk that the target audience was just too young and the books may not appeal to adult readers.

The first book in the series, The Fall is a thin volume of only 219 pages, printed with large text. I finished the book in two days but I need not have been concerned about whether or not I would like it - this is another Nix success.

This is a complex, original and highly imaginative book. In places, it reminded me of The Wind Singer by William Nicholson which I reviewed in August but both books were released in 2000 so I think that is just coincidental. The book is based in a Dark World where light is the most precious commodity and society is classed in a hierarchy based on access to that light. Through Nix's writing, you can feel the claustrophobia and constant darkness of this world and you find yourself longing for mentions of light. It made cold and rainy England seem positively bright and shiny by comparison!

I enjoyed the portrayal of the main character Tal who is aged about 13½ (the book is set shortly before his Ascension which occurs at age 13¾). He is shown to be a strong and resourceful protagonist which makes a change from characters in books where the lead character has to learn or discover their strength and ability as a leader (for example Northern Lights).

What sets this book apart from others in the genre is the description of the Dark World and the various tasks that must be completed by Tal. The concept of the Achievements, for example, where games need to be played to win favours or sun stones is enhanced by the descriptions of the games that need to played. I thought the idea of the Beastmaker game was awesome and I enjoyed the concept of the Crystal Wood too.

All told, I thoroughly enjoyed this book and I will definitely read the whole series. I wish they weren't releasing the books so slowly in the UK!! I'll wait until they are released in the UK though because I prefer our covers to the overseas editions (and yes, that means I intend to buy the entire series). I believe they have released the six books overseas as two three-book omnibuses and that is actually a great idea. That would certainly help bridge the gap for adults reading the series as the only thing that really marks this as a children's book is its length, not the complexity of the story.