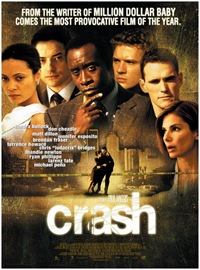 People had been telling me for years to watch this film and I never did because of the truly awful 1997 movie of the same name. I finally rented the dvd a couple of days ago and had to watch it again last night to pick up all the "clues".

This film is like a masterfully woven blanket. A really remarkable film and yes, if Usual Suspects could get an Oscar for Best Writing then this film deserved one too.

I am only watching Capote and Good Night, Good Luck this week so I can't say if Crash should have won Best Motion Picture instead of them, but this film is definitely Oscar material.

Thandie Newton deserves mention because her performance was astounding and really moving. During the police encounter (not to give away spoilers) her expression was so convincing, so real. She deserved the BAFTA.