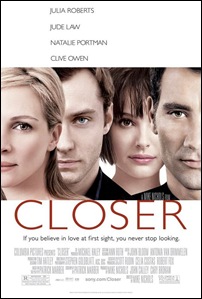 [Possible spoiler] I really enjoyed this film. There was something very real about the film, about how you can love one person yet long for another. It touches on the blindingly stupid decisions we make in life (including love decisions) and how human beings seem incapable of seeing the long term effects of their actions.

I enjoyed the character development over the four years that the film is set in: Clive Owen's character becomes sleazy, Jude Law's begins to fancy himself as a Casanova and then becomes nothing, Julia Roberts's moves from elegance to cowardice and Natalie Portman's emerges as the strongest character, the only real winner in the film. Lovely, really lovely.