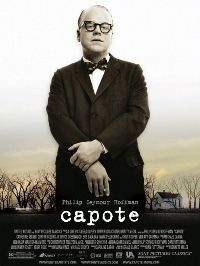 It took me a long, long time to see this film and the most important question to answer is: Did Philip Seymour Hoffman deserve the Oscar?

Yes. The answer is yes. I had barely heard of PSH when he won that Oscar and almost couldn't believe he was even nominated. But his acting in this film is so superb... I watched the extras on the DVD and there was a clip of the real Capote. PSH got the whole thing - Capote's rather difficult voice, his mannerisms and gestures.

At first I thought Clifton Collins Jr. was brilliant too. I mean, I still think that, but in reality, Perry Smith was completely devoid of any moral fibre and entirely reprehensible. In all of the photos you find of him, he was smiling! He thought it was a photo call. I imagine it worked for the director to have you feel sorry for Smith, to feel empathy. Whatever the case, poetic license and all that, Collins' performance was really good.