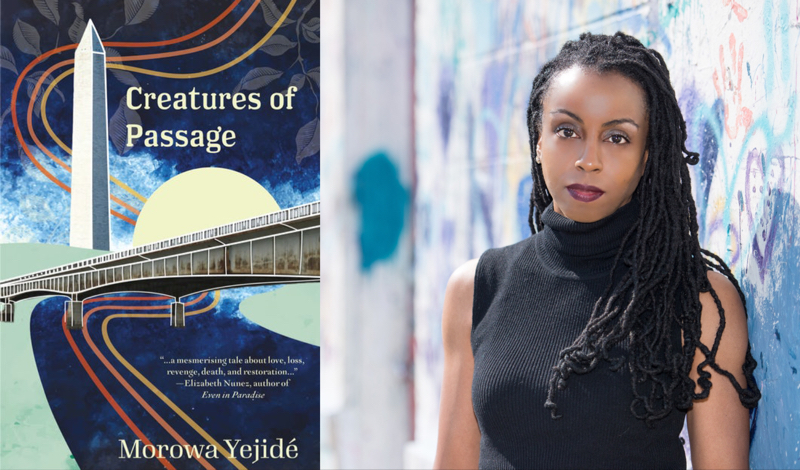 One of the absolute truths about judging novels is that a review can in no way adequately capture a book and this is never more true than in Morowa Yejidé's incredible Creatures of Passage. Compared to Toni Morrison's Beloved, Creatures of Passage is a beautifully written, lyrical novel that deals with exceptionally heavy topics. As such, it must come with trigger warnings for child rape, murder, grief, racism, slavery and genocide.

Creatures of Passage is a tale about several lives torn apart by the actions of men. Nephthys Kinwell has been floating through life, cast adrift by the unexplained murder of her twin brother Osiris and burdened by the unbearable inertia of one.

Her alcohol-soaked existence is disturbed by the arrival at her front door of her great-nephew Dash. Dash has been plagued by visions of something he witnessed at school and he has been holding conversations with a ghost on the banks of the Anacostia River. It will take Nephthys longer to figure it out than the reader, but Dash is in grave danger.

Critical to Creatures of Passage is a magical realism that is so well written that the reader can't help but suspend disbelief. Of course magic, ghosts and post-life experiences are real in a novel that puzzles together the whole of existence in 1970s Washington DC from ancient cultures, through genocide, slavery, Jim Crow and racism, to murder and child abuse.

Creatures of Passage is a brutal read and I can understand why readers might feel unable to complete it. It raises the question of how do you talk about child sexual abuse, especially in fiction? In her unflinching style, Yejidé digs deep into the planning, intention, manipulation and delusion of the paedophile. These are not accidental events but a planned assault against a vulnerable individual. I once found myself in the crosshairs of such a person and despite my own trauma and triggers, I carried on reading to access that insight.

While this is but one topic in Creatures of Passage, Yejidé treats all of the other topics with a similar brutality. It's been a while since I've highlighted passages with such regularity in a fiction novel, moved as I was by the concepts and writing.

"And there would be latter-day nationalists and citizen circles and patriots, who from the forgotten fiefdoms of the territories heard the claxon bells of an orange-skinned king"

"And here Rosetta stopped, panting and dizzy, because she knew - as all the abused do - that there were no nouns or verbs or grammatical constructs to describe the depths of her outrage and pain"

I give Creatures of Passage a superb five out of five stars. This book stopped me in my tracks, causing an existential discomfort and making me contemplate the sheer unfairness of it all. Recommended for fans of literature that pushes the reader to contemplate the big issues.

Creatures of Passage is available on Amazon and Bookshop.org (note: both these links are affiliate links; I will receive a small commission if you purchase using these links at no extra cost to you).

I received an electronic copy of this novel for the purposes of this review. I will always provide an honest review, whether books are provided to me or purchased by me.