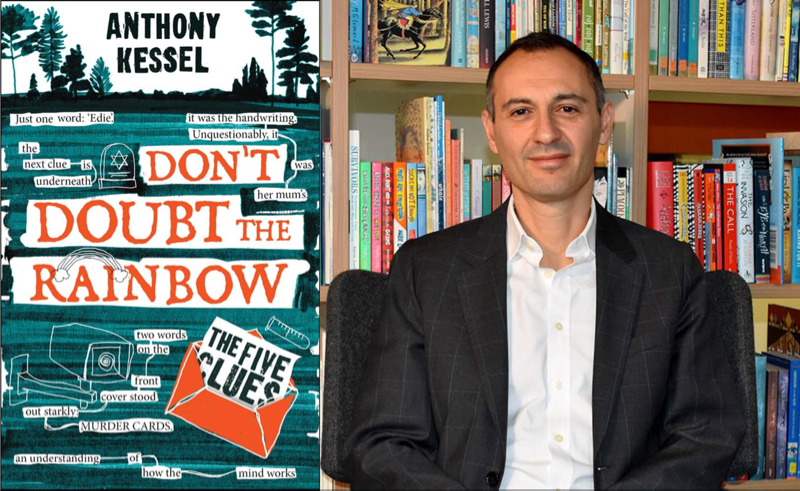 Thirteen-year-old Edie Marble and her family have had a tough year. Edie's mother passed away a year before and Edie learns at the stone unveiling that her death may not have been an accident after all. Through five clues that she leaves for her daughter, Edie's mother leads Edie to the truth about her death and a massive corporate human rights violation. The Five Clues is Anthony Kessel's debut novel and the first book in the Don't Doubt the Rainbow series about amateur sleuth Edie who must harness the Three Principles approach to solve crimes.

The Five Clues is cool in many ways. It has an Alex Rider approach to crime fighting in that it is pretty implausible, definitely not something you should try at home, but bucketloads of fun and non-stop action nonetheless. Like Anthony Horowitz's teen crime fighter, London-based Edie is working through her grief over the loss of her mother and couldn't do it without the help of a very good friend.

Unlike Alex Rider, Edie has a tight-knit family, including a loving father and younger brother. It is this love that will determine whether or not Edie is successful in her quest. I loved the music references that Edie and her parents shared and know that this book will appeal to the teens of music-loving parents.

What I enjoyed most about the novel was Edie's Judaism and the descriptions of the Jewish grief rituals such as the stone laying service. Being half-Jewish myself, I'm most familiar with Jewish funerals and graveside rituals and it felt great to see that represented in a YA novel.

What Kessel does best in The Five Clues is to write complex and detailed villains, especially in Zero, the trained assassin central to the story. It is rare to really get to the heart of a villain's motives and raison d'etre, especially in a young YA novel such as this.

But that is where The Five Clues doesn't quite meet the mark. It is aimed at the younger side of the YA spectrum and the ways the Three Principles are shoehorned in to the story felt a lot like telling, not showing. I'm not certain it was particularly well done either, I have a post-grad in psychology but still have little understanding and appreciation for what the Three Principles entail, besides seeming vaguely Jungian. I do know that it was mentioned so many times in the novel that I lost the will to care about it by the end and I suspect younger readers will feel the same.

Nevertheless, The Five Clues is fun with a well-thought out mystery and well-written antagonists. I give it three out of five stars and recommend to fans of Alex Rider and Ebola Holmes.

The Five Clues will be released on 2nd August 2021 and you can pre-order from Amazon. You can also visit the Addicted to Media YA Fiction Bookshop to see my recommendations (note: both these links are affiliate links; I will receive a small commission if you purchase using these links at no extra cost to you).

I received an electronic copy of this novel from Netgalley. I will always provide an honest review, whether books are provided to me or purchased by me.