Natália Gomes's Devastating 'We Are Not Okay' ★★★★☆ 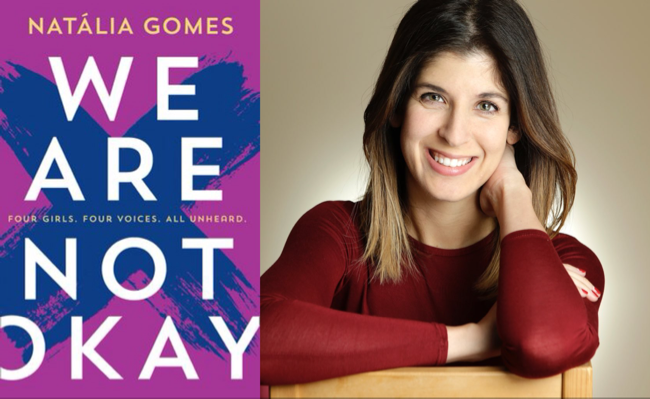 All is not well at Birchwood High School, located in a small town near Glasgow, Scotland. Underneath the veneer of respectability and proper school rules, lies a culture of shaming, gossip and bullying. It is in this fictional setting that Natália Gomes sets her latest young adult novel We Are Not Okay which explores the treacherous paths teens must traverse in an age where every step is captured and shared on social media.

We Are Not Okay is told by four narrators in short, alternating chapters, making it almost impossible to put down. Sophia is almost ready to take her relationship to the next level with her boyfriend Steve until he betrays her in the most public way possible. Lucy is hiding a terrible secret but she knows that as long as she works to destroy the lives of others, it will serve to deflect attention away from her.

Ulana is a Muslim student, recently moved over from Morocco, who stands on the sidelines of Birchwood society. She knows that just one wrong step could bring dishonour to her family. Trina knows she will never go to university and despite her reputation, has only gone as far as kissing boys. She definitely didn’t consent to what happened at Lucy’s party.

It’s a train wreck waiting to happen and when it does, it impacts not only the lives of four girls but the whole community surrounding Birchwood High School.

We Are Not Okay ticked many boxes for me. The four protagonists showed great character development over the course of the story and had to make brave decisions in very trying circumstances. I didn’t always agree with or respect the decisions they made but ultimately they were all written in line with their characters and I respect that.

Ultimately this was a fast-paced novel that showed how quickly incidents can escalate in the small microcosm of a high school and it was good to read a book of this kind set in a school in the UK. Because of its focus on bullying and social media, this would be a great book to read in the classroom. Natália also writes under the name N. D. Gomes and I liked what I read here enough to add her novels Dear Charlie and Blackbird to my to-read list.

I give We Are Not Okay an excellent four out of five stars and recommend to fans of 13 Reasons Why, John Green and Jennifer Niven.