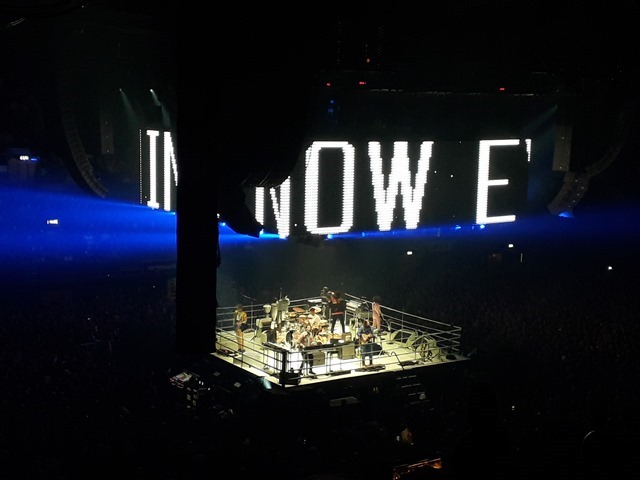 How do you describe a concert when it is the realisation of years of yearning and months of anticipation? I waited to see Arcade Fire in concert for the longest time and was ecstatic when I got tickets for the gig at Wembley Arena on 12 April 2018. It was certainly worth the wait as Arcade Fire exceeded all expectations and delivered one of the best performances I have ever seen live.

The concert begins at exactly 8.45pm as Walter Murphy’s “A Fifth of Beethoven” rings out over the arena. It soon cuts to “Everything Now (Continued)” as the band make their way to the stage, punching and posing while their heavyweight boxing stats are broadcast on the massive screens above the stage. Spoiler: they are all winners and they never, ever lose.

Finally they are there and they are larger than life and it is time for the night to begin. With a setlist in excess of twenty tracks, it is to be expected that the band is short of time but even so, it feels like they rush through “Everything Now”, “Rebellion (Lies)” and “Here Comes the Night Time”. 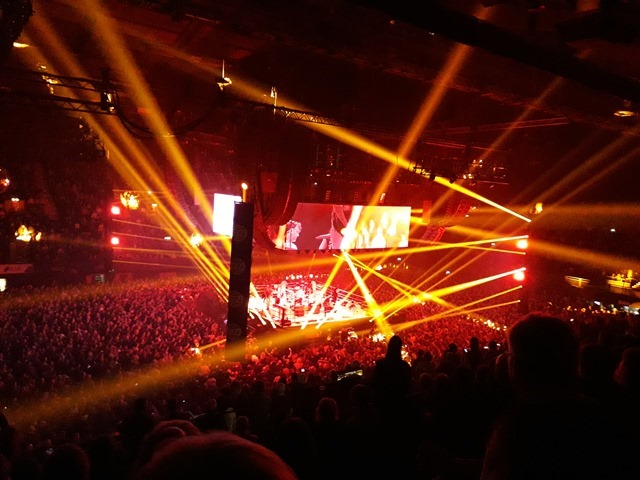 I’m relieved when the band takes a breath and Win introduces “Haïti”. Incidentally, I can’t be certain but I think that after explaining the reason behind the song, Win said something along the lines of how the audience at Wembley probably wouldn’t care about that. It’s probably worth mentioning that the British public raised £107m for Haïti so we definitely do care. Nevertheless, “Haïti” is a beautiful track and listening to it live, I almost feel like I’m beside the sea in Port-au-Prince. It’s the first time I really notice how beautiful Régine Chassagne’s vocals are live and so marks the beginning a rather enduring girl crush.

From this point on, the band really hit their stride and they begin to deliver hit after hit, starting with fan favourite “No Cars Go”. Next up is a pair of my favourites from Everything Now, “Electric Blue” and “Put Your Money On Me” followed by “Crown of Love”. 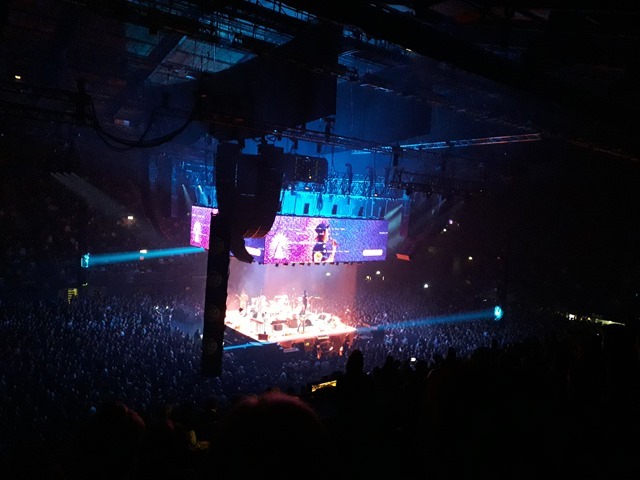 This is the point where the concert becomes sublime. I’m standing there, singing along to “Ocean of Noise” and “Neighbourhood #1 (Tunnels)” at the top of my lungs, with tears in my eyes, thinking this can’t get any better and then it does.

At the end of the evening when my friends and I try to pinpoint the pinnacle of the evening, it will be the next three songs that we unanimously agree upon. It all begins with “The Suburbs”, to roars of jubilation from the crowd. The band takes a minor breather next, with “The Suburbs (Continued)” but I know exactly which track is up next and I’m jumping in the air, chanting the opening chords and then it is there: “Ready To Start”. Hands are in the air, the lights are going crazy and it is one of the most incredible concert moments I have ever experienced.

Then Régine is standing up, moving away from the drum set and my friend knows what is coming next and I can only hope against hope that he is right. Of course he is. It is “Sprawl II (Mountains Beyond Mountains)” my favourite of all of Arcade Fire’s songs and a song that even my family knows the words off by heart to because I cannot resist singing along to it every time I hear it. Hearing it live is absolutely incredible. 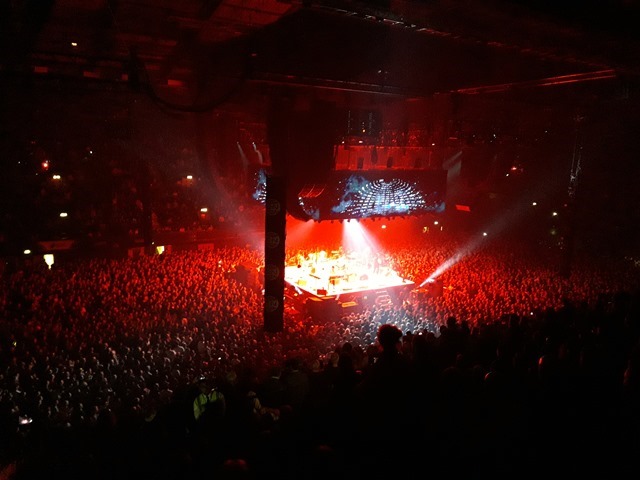 My love for Arcade Fire is relatively new, starting only in 2013 with Reflektor and up next are two of the tracks that started it all, “Reflektor” and “Afterlife”. By this time the crowd is in a frenzy, basking in the glow of a fabulous performance, egged on by the frenetic antics of William Butler and the other mad scientists on stage.

Everything goes up in flames on the screens above the stage and as words begin to emerge, I know what is coming next. “Creature Comfort” has never felt so real and is followed by “Neighborhood #3 (Power Out)” and suddenly the band is gone. 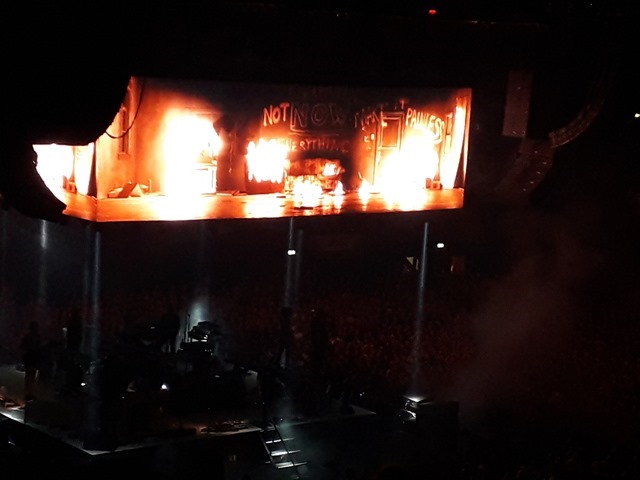 Sometimes a band will return from an encore and calmly play a couple of their best tracks before disappearing into the night. Arcade Fire’s encore is not like that. In fact, it is pretty mind-blowing. They burst back onto stage with “We Don’t Deserve Love” from their latest album and then things get interesting.

I look up on the stage and standing there is none other than Jarvis Cocker. I don’t know why I expect him to duet with Win on an Arcade Fire track but suddenly he’s singing “Cunts Are Still Running the World” and I’m having a moment. It’s the first time I’ve seen him live since Pulp’s surprise performance at Glastonbury in 1995 and it is glorious. And how relevant are those lyrics?

Arcade Fire welcome back the Preservation Hall Jazz Band, their support act for the evening, and they perform “Everything Now (Continued)” before launching into a barnstorming performance of “Wake Up”.

And all of a sudden, it really is over. The lights go off and both bands exit the stage to a rendition of David Bowie’s “Rebel Rebel” and the crowd is just standing there, not wanting it to end, as twenty or so performers inch painstakingly through the crowd towards the back exit. I’m stunned, be be quite frank, and know that whatever I do, I have to see Arcade Fire in concert again. 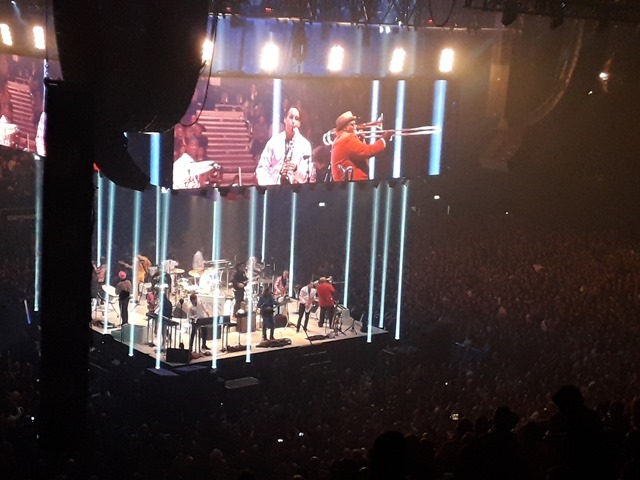 … but before I do, I need to mention how fantastic the production was at this concert. The lights were spectacular and the location of the stage in the middle of the arena meant that everyone had a decent view, no matter where they were. The giant screens gave a brilliant view of the action on stage, as well as several close ups of my beloved Régine.

But now to my complaint. Arcade Fire did not play four of my favourite tracks and that just makes me sad. “Body Is A Cage”, “We Exist”, “Intervention” and “You Already Know” were glaring omissions and so I will endeavour to catch each of those tracks live at least once in my life before I die. Arcade Fire, ladies and gentlemen.