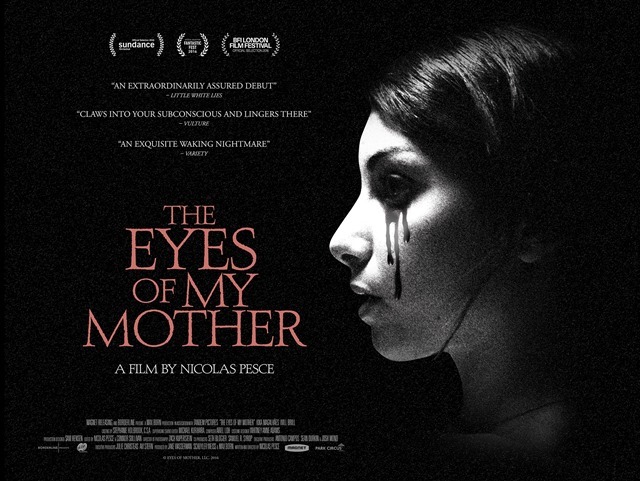 I have an ongoing argument with my friends and family. They simply cannot understand why I am so fascinated by horror and in turn I despair at the relative lack of horror fans in my chosen circles. I’ve often mentioned that I enjoy horror because it is exhilarating but sometimes I watch a film like The Babadook or Open Grave and I realise there is far more to the story.

Horror asks the questions that other genres are too afraid to ask.

Horror is bold and speculative, diving deeper into the darkest psychiatric depths than The Silence of the Lambs could ever hope to reach.

Every so often I watch a horror film that truly moves me, that sits in my subconscious for days after I watch it, worming its way into my dreams (and nightmares) and colouring everything that follows.

This is how I feel about Nicolas Pesce’s debut masterpiece The Eyes of my Mother and nothing I say here can possibly do this film justice. At just 76 minutes long, it is an incredibly complex film, delving as deep into the creation of evil as it is possible to go. I imagine this as the prequel, the backstory that many other horror films fail to divulge.

There is an old stereotype in horror films, the psychotic old woman driven insane by grief and misery whose only respite is to devour your soul, or worse. On those rare occasions when her story is told, usually in the form of an ancient text, we’re given only the briefest of glimpses into a terrifying mind.

What if that woman was once a girl? What if she loved and was loved in return? What if she experienced an unimaginable horror at a very young age and spent the rest of her life trying to stanch the flow of a desperate, suffocating loneliness?

Francisca (Olivia Bond) lives with her parents on a farm in the middle of nowhere in rural America. One day she lets in a stranger and her life changes forever. So does his. But where is the horror? Does it lie in the events of that day or in Francisca’s slow, exacting pattern of revenge? Who is evil and who is the victim?

Filmed entirely in monochrome, The Eyes of my Mother is a stunning debut and an incredibly beautiful film. From the opening scenes there is the constant juxtaposition between the life of a beautiful young girl on an idyllic farm and the horror that lie in wait.

The Eyes of my Mother is a film about loss and loneliness, but it is also a film about the dispassionate distance of a surgeon from death and the consequences of adopting that mantle at such a young age. It is an ambiguous and tricky film, one that will no doubt surprise you as you find yourself cheering for the wrong person. Cool and calculating, this is a film that offers a unique anatomy of evil and the making of a monster.

At times the film is surprisingly tender, focusing on the power of touch and human contact. The cast is small with just seven characters but each of the actors gives a nuanced performance. Kika Magalhaes takes over from Olivia Bond as the adult Francisca and she has a powerful presence on screen. This is a film that depends on sound and visuals but just as much happens off-screen as on-screen.

It is easy to see why The Eyes of my Mother has lit up film festivals worldwide and it is reaping in the awards nominations, including a win for Best Feature Film at last year’s Fantastic Cinema Festival. This is a film that has definitely gotten under my skin and will assume a place amongst my favourite horror films of all time.

I give The Eyes of my Mother a superb five out of five stars and would highly recommend to fans of American Gothic and art-house horror.

A Park Circus Future Classics release, The Eyes of my Mother will be released in UK cinemas on 24 March 2017.