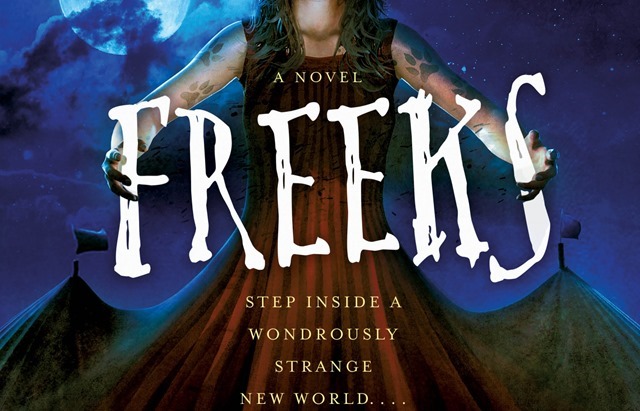 It’s all happening at Gideon Davorin’s Traveling Sideshow. The audience thinks they are seeing slight of hand and optical illusions but there are no illusions here. Gideon’s sideshow is the real thing, a magical place where you’ll encounter levitation, pyrokinesis, necromancy and all manner of dark arts.

The sideshow has set up camp in Caudry, Louisiana, against the better judgement of those who experience premonitions and forewarnings. The performers have little choice, living from gig to gig, they are all broke and simply need to last it out for seven days.

Mara is the daughter of Lyanka, a famed fortune-teller with a direct link to the dead. On their first night in Caudry, Mara takes a walk across town and happens upon a house party. There she meets Gabe, intense and witty with just the hint of a deep secret about him.

Despite the mystery, Mara and Gabe become inseparable within days. But what of Caudry? There is a sinister presence lurking at the edges of the campsite and worse than that, there are attacks occurring with ever-increasing frequency. Who or what is it that is attacking the performers and how can it be stopped?

Freeks is the latest book from Amanda Hocking, a veteran young adult writer and author of the Trylle and Kanin series.

There is so much to say about Freeks and it is difficult to know where to begin. Perhaps it would make most sense to start with the gorgeous cover. I realise that it is the first day of the year but I’m willing to place a wager that this will be my favourite cover of 2017. It is colourful, mysterious and alluring and embodies everything that this book is. 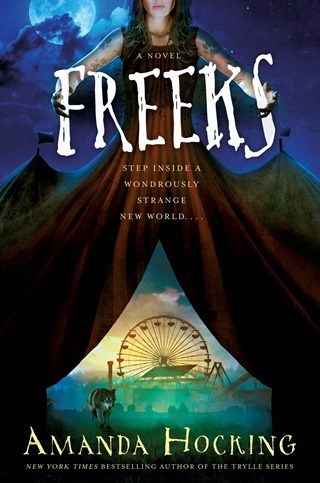 I loved the concept of the travelling sideshow and the Supernatural feel of the book. Whereas Supernatural has us singing along to the classic rock hits of the 1970s, Freeks is set in the middle of the 1980s and I loved spotting all the pop culture references and songs that came out in my teenage years.

Mara is one of my favourite protagonists in a long while. Confident and self-assured, she was no Mary Sue waiting for a boy to come along and save her and in fact at one point, she muses about how she is going to break Gabriel’s heart when the sideshow leaves town.

In addition to Mara and Gabe, Freeks is full of intriguing characters, each with their own history and reasons for joining the sideshow. It is such a rarity when authors pen diverse, interesting characters and it was greatly appreciated and enjoyed. With such a diverse cast, I would love to see this book hit television or the big screen. Amanda Hocking has thought about it too and says she envisaged Cassie Steel and Ryan Guzman as possible actors who could play Mara and Gabe.

At its core, Freeks is a fascinating paranormal fantasy where the tension builds up and the threads slowly come together to unearth the peril that is facing Gideon Davorin’s Traveling Sideshow. I’ll be honest and say that I guessed part of the final reveal but that detracted in no way from my enjoyment of the story. In fact, I felt rather smug for picking up on the clues Hocking left throughout the book.

There is no news yet on whether there will be a sequel to Freeks and indeed, it is being marketed as a standalone novel, but can I just say that I really hope there is one?

I give Amanda Hocking's Freeks a superb five out of five stars and recommend it to all lovers of the paranormal and unexplained and fans of young adult fiction.

I’m taking part in the Freeks blog tour that is taking place across the book blogosphere until 10 January 2017. If you’re in the US, definitely follow @amanda_hocking on Twitter as she is tweeting out several chances to win a copy of Freeks on the blogs in the tour. My gift to you, dear readers, is an exclusive excerpt from Chapter 5 of Freeks.

Unlike many of the other members of the sideshow, I didn’t have a specific job. My mom was a fortune- teller, Gideon did a magic show, Zeke had his tigers, Brendon and his family did acrobatics, Seth was a strongman. My best friend Roxie Smith was in two acts— she helped out Zeke, and did a peepshow revue with two other girls.

I had no talent. No special ability, making me essentially a roadie. I did what was needed of me, which usually involved helping set up and take down, and various menial tasks. I cleaned the tiger cages and emptied out latrines when I had to. It wasn’t a glamorous job, but it was crucial to our way of life.

Since Roxie worked with the tigers, Mahilā actually tolerated her. Roxie was helping me clean out the tiger cage they traveled in. The cage was open to a fenced-in enclosure Seth had built, so the tigers could roam as they pleased.

Safēda lounged in the grass, the sun shining brightly on her white fur. Whenever we stopped, Safēda seemed content to just lay in the sun, sleeping the entire time, but as the older tiger, it made sense.

Mahilā paced along the fence, occasionally emitting an irritated guttural noise in between casting furtive glances back toward Roxie and me. Her golden fur was mottled with scars from her past life in the abusive circus, including a nasty one that ran across her nose.

“So where did you go last night?” Roxie asked, her voice lilting in a sing song playful way. She was out in the run, using a hose to fill up a blue plastic kiddie pool so the tigers could play in it, while I was on my hands and knees scrubbing dung off the cage floor.

Her bleached blond hair was pulled back in a ponytail, and the sleeves of her white T- shirt were rolled up, revealing her well-toned arms. The cut- off jean shorts she wore barely covered her bum, and her old cowboy boots went up to her knees— her chosen footwear anytime she was at risk of stepping in tiger poop.

With fair skin, full lips, large blue eyes, and a dainty nose, Roxie was pretty and deceptively tough. Being a beautiful carnie was not an easy job, and dancing in the revue under the stage name “Foxy Roxie” didn’t help that. But she made decent money doing it, and Roxie never put up with anybody’s crap. I’d seen her deck guys much bigger than her and lay them out flat on their backs.

“I was just at a party,” I said as I rinsed the brush off in a bucket of bleach and warm water.

“A party?” Roxie looked over at me with a hand on her hip.

“How’d you get invited to a party so fast?”

I shrugged. “I was just exploring town, and I saw some people hanging outside of this big house party, and they invited me in.”

“So what are the people like here? Are they nice?”

Safēda had gotten up and climbed into the pool, and then she flopped down in it, splashing Roxie as she did. Roxie took a step back, but kept looking at me.

“I don’t know. The people I met last night seemed nice, and they were superrich, so that bodes well for the town, I guess.”

“Like their house is practically a mansion.” I dropped the brush in the water and sat back on my knees, taking a break to talk to her. “It was the nicest house I’ve ever been in, hands down.”

“Is that why you spent the night there?”

Roxie understood my fascination with houses. Well, “understood” wasn’t the right word. It was more like she knew of it, but didn’t understand it all. She’d grown up in an upper- middleclass family, in nice houses with basements, and thought they were about as boring and lame as she could imagine.

“Partly.” I nodded. “It was a really amazing house. There were pillars out front, and the front hall was bigger than my trailer.”

“I know but . . .” I trailed off, trying to think of how to explain it to her. “You know how you felt when you first joined the sideshow two years ago? How everything seemed so exciting and fun, and I was like, ‘We live in cramped trailers. It kinda sucks.’”

Roxie nodded. “Yeah. But I still think this life is a million times better than my old life. I get to see everything. I get to decide things for myself. I can leave whenever I want. There’s nothing to hold me back or tie me down.”

She’d finished filling up the pool, so she twisted the nozzle on the hose to shut it off. Stepping carefully over an old tire and a large branch that the tigers used as toys, she went to the edge of the run and tossed the hose over the fence, before Mahilā

decided to play with it and tore it up.

She walked over to the cage and scraped her boots on the edge, to be sure she didn’t track any poop inside, before climbing up inside it.

“So what was the other reason?” Roxie asked.

I kept scrubbing for a moment and didn’t look up at her when I said, “Gabe.”

“Did you have sex with him?”

“What what what?” Luka Zajiček happened to be walking by just in time to hear that, and he changed his course to walk over to the tiger cage. “Is that what you were up to last night?”

“That’s what sucks about living in a community so small. Whenever anything happens, everybody knows about it right away,” I muttered.

Copyright © 2017 by Amanda Hocking and reprinted by permission of St. Martin’s Griffin.