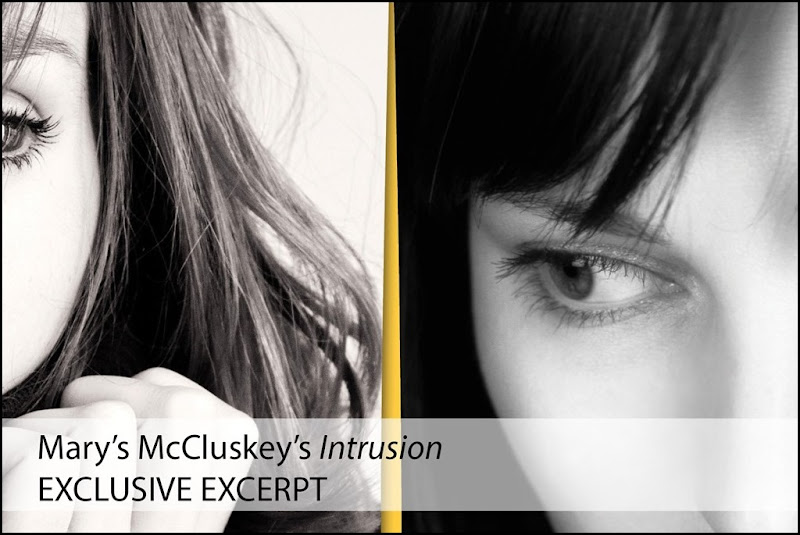 When Kat and Scott Hamilton lose their teenage son in an accident, they know that their grief can bring them together but it can also tear them apart. Enter Sarah Cherrington, an old school friend of Kat’s. Self-assured and wildly successful, her helping hand soon turns to schoolgirl rivalry and an intrusion into every aspect Kat and Scott’s lives.

Intrusion is the new novel by Mary McCluskey and today I am thrilled to share an exclusive excerpt of this edge-of-your-seat thriller as part of the Intrusion blog tour.

Intrusion by Mary McCluskey is out now (£8.99 Little A)

The narrow hotel bar, with its dull, disguising light, ran alongside the crystal ballroom. Kat Hamilton, seated on a barstool at the far end of the room, sipped her fourth gin and tonic and wished that she could fade like a ghost into the wall. The formal attire pinched. She had worn only casual clothes since the funeral; on bad days she wore her nightshirt all day. On this evening, the classic black dress chafed against her skin, like a winter sweater on sunburn.

Her husband, Scott, had visited her twice, stealing sips from her drink, taking deep breaths as he surveyed the room. He hadn’t tried to persuade her to join him in the glittering ballroom: he knew she would say no. Scott was to receive a Los Angeles Lawyers Pro Bono Award for negotiating a lease for a halfway house run by a local priest and reformed gang members. Kat had not wanted to come.

“Just for an hour, sweetheart.”

“Why? The partners won’t notice if I’m there or not.”

“Not for the partners. For the kids.”

She could see Scott at the far side of the ballroom, Glenda Lilley, his smart female associate, at his elbow, Father O’Connor jubilant beside him. Scott shook hands, smiled, appeared in control. He had never lost control. Not even when their world imploded at 10:31 a.m. on a Saturday morning twelve weeks and three days ago when Kat lifted the phone to hear a police officer’s voice say, I am very sorry to have to tell you, ma’am, that your son, Christopher ... And after an enormous whoosh, when the air was sucked out of the universe, she had screamed and screamed until Scott ran in from the garden, took hold of her shoulders, and held her tight to his chest. The officer’s words resonated in her head every day. She wondered if Scott still heard screaming.

“You plan to hide out in the bar all evening?”

James Dempsey draped his long body onto the stool next to her. An attractive young black man they had befriended when he was a summer clerk, he was now a hotshot associate, trying hard to make partner.

“Hi, James. Not all evening. I suppose I have to be at the table when they make the award. Then, I hope we can just slip away.”

He took her hand.

“Not getting any easier for you, Kat?”

“Scott has admirable self-control. And a stiff upper lip.”

They both looked over at Scott, still holding court in the center of a group. A typical urban lawyer, Kat thought, even to the serious eyeglasses. Still a handsome man, though, at least to her.

“I thought you Brits had the prerogative on that,” James said. “But I guess it’s the manly way.”

“Yes,” she said. “Pain. You know, Chris’s death hurts more physi­cally than his birth did. Physically.”

Kat knew she was talking too much, four drinks were hurtling around her bloodstream, but she could not stop.

“It’s like someone took a knife and just scooped out everything— heart, guts. We’re the hollow ones, now, Scott and I. All scooped out.”

She looked helplessly at James. He reached out and placed an arm around her shoulders.

“But if I’m normal, what’s Scott? I can’t move, and he can’t stand still. He’s working twelve hours a day.”

A young black man with a shaved bullet head, an earring, and a solid buffed body stopped beside them and stared at James.

“Well hello, Chiller. You here to support your buddies?”

Kat was sure that James knew this, but he pretended surprise.

“I’m looking forward to seeing that. I’ll be cheering.”

Chiller swaggered off. James, still smiling, turned back to Kat.

“We better get in there. You’re at the main table. Behind the podium.”

The awards ceremony began immediately, while people were still eating, which meant, Kat noted gratefully, that the evening would soon be over. She was having difficulty swallowing. When Scott’s name was called, he accepted the small plaque with a simple thank-you, bowing graciously, and Kat applauded with the others. But there was some whispering between Scott and the MC, and Scott returned to the podium again. He smiled as he took the microphone.

“Well, I also get to present an award this evening. And it’s a big honor for me. It’s to a young man from Compton. While we were nego­tiating contracts, doing the easy stuff like the leases and the paperwork, a group of kids were out there working fifteen hours a day, painting, rebuilding, fixing. Making it safe. Making it home. Representing that group today—Chiller.”

Chiller headed toward the podium and Scott began to read from the card he was handed.

“I am proud to present this award to Christopher . . .”

Scott faltered, stared at the card in his hand, his face ashen. Kat’s heart leaped. How could this be? Christopher was a blue-eyed, smiling teenager. A boy with fair hair and freckles, just like her own. The hushed audience waited. Chiller turned, frowning. Scott began again. He said the words carefully now, with rigid deliberation.

“To Christopher Richard Washington, aka Chiller.”

The applause was loud and exuberant. Chiller, grinning as a press camera flashed, took the silver trophy and waved it at the audience, holding both arms above his head like a prizefighter. Scott looked over at her and Kat saw that the ice had splintered, the armor shattered and fallen away. His eyes were bleak as they met hers, then he looked away, staring into an impossible future.

Intrusion by Mary McCluskey is out now. Available in bookshops and on Amazon.

Mary McCluskey is a journalist and a prize winning short story writer. Her short stories have been published in The Atlantic, the London Magazine, Story Quarterly, Salon.com, London's Litro, Sunday Express’s S Magazine, and literary magazines in the US, UK, Australia and Hong Kong.  She divides her time between Stratford upon Avon in the UK and Los Angeles, California.

Continue on the Intrusion Blog Tour 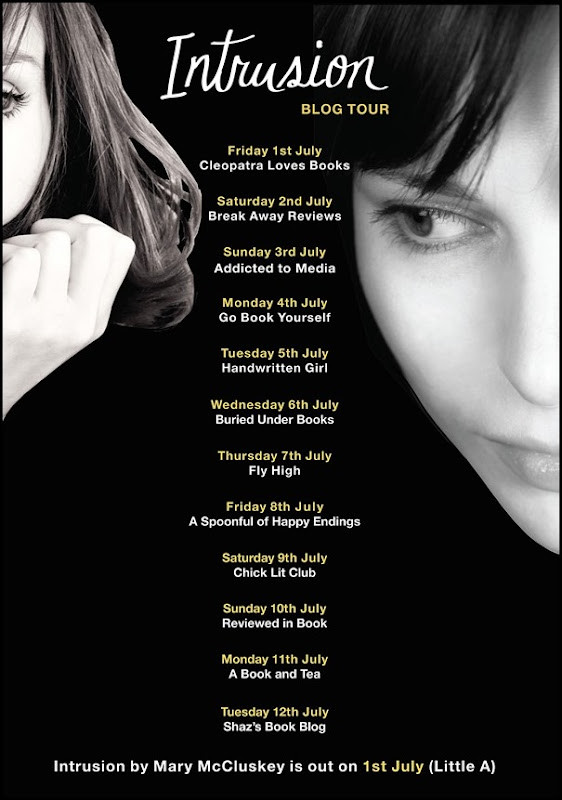