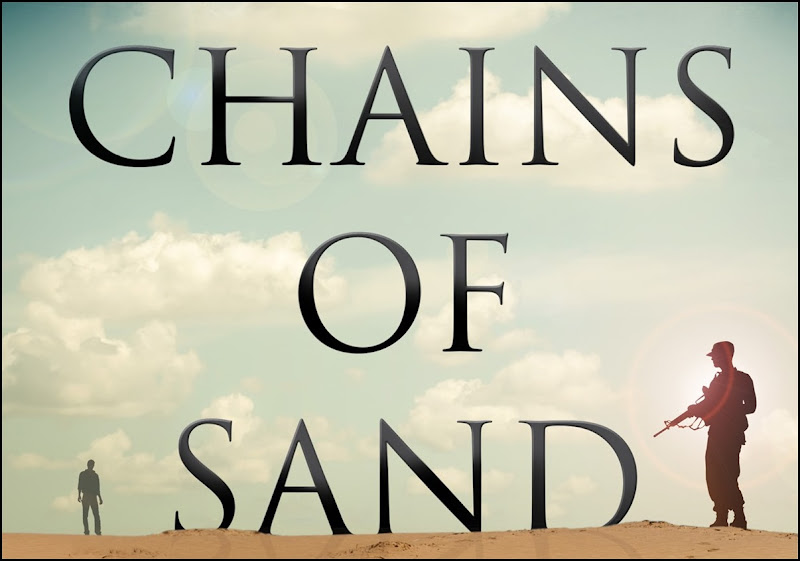 Continuing my quest to read good fiction in 2016, I was quite intrigued when an email regarding Jemma Wayne’s brand new novel Chains of Sand appeared in my inbox. My interest was piqued as soon as I saw that it was set in Israel and I was curious to know how the author tackled the various hot topics in the region and whether she would do so without bias.

I haven’t finished the book yet but am thoroughly enjoying it. I do have a bit of a treat for you though. This week I am taking part in the Chains of Sand blog tour and I am pleased to share an exclusive extract of the book with you. I hope you enjoy it and that it makes you want to read the book. If so, do be sure to come back for my review and also to let me know what you thought of it.

“But, Danny…” She stops. Silent but still thoughtful.

So what, what? What more is there? Is she the reason I want to live in Israel? No. Yes.

Partly. Why does it matter? “What?” I prompt finally, but she shakes her head, brushing away the dangling deliberation. Her jaw straightens.

We drive in silence. It is not awkward, we do this. With Safia it’s all about the back and forth, the repartee, with Hayley there was endless chit-chat, but Orli and I…there are jokes, there’s lightness, but we tend also to say a lot of stuff that matters, and we punctuate that stuff with this: calm, quiet. Orli stares out of the window and I find myself regarding the familiar North London streets in a new light. Her light. Or how I imagine it to be. The buildings, I suppose, have their own history, interesting for a foreigner. London will never be the land of the living bible but the architecture is an eclectic mix of generations, colours, styles, a fascinating fusion organically grown atop each other. For all its flashing lights and cutting edge technology, not even Tel Aviv can replicate this. There, the epochs, millennia apart, blend nevertheless into a pale panorama, and everything seems to have emerged from of a pile of sand.

“Take me to the eye,” Orli says suddenly as though I’ve been talking out loud. “I want to see the whole of London.”

“You mean the wheel? Now?” I’ve never been to the London Eye. I don’t even know how to get there.

Hayley would never have suggested something so spontaneous. Not at this hour. I type ‘London Eye’ into my Sat Nav and we drive. Past my road, through Regent’s Park and across the river. I point out Big Ben and Orli points out most of the other sights that for me are ordinary and so invisible. Finally we arrive and Orli insists on buying the tickets, counting out her carefully acquired currency.

It is almost dusk and there are only a few other people in our capsule - presumably the views are better in daylight. But the city is illuminated by a million tiny dots of different hues: street lamps; break lights; stark neon office windows; soft bedroom glows. It looks magnificent, magical, elegant, and in the calm of our capsule, 450 feet above the emptying, rain-cleansed streets, it is possible to forget the plague of people that will emerge in the morning, swarming into tunnels, across pavements, up and down buildings, all over each other, like rats. And that I am usually one of them. And that the city feels like a giant cage. With Orli, up here, it is possible to forget this.

“So this is your city,” Orli says, more to herself than to me. “It looks like you.”

“It has your confusion.”

I raise my eyebrows.

“It’s beautiful,” she explains. “And very interesting, but it doesn’t know what it is. Over there it is kings and queens.” She points at the Tower of London. “There it is space.” She fingers the Gherkin. “And here it thinks it is France.” She points to the gothic structure of the Palace of Westminster. “But this is its beauty,” she adds.

Chains of Sand by Jemma Wayne is out now in paperback (Legend Press, £9.99)

Politically engaged from a young age, Jemma Wayne graduated from Cambridge University with an academic scholarship for her achievements in Social and Political Sciences, before becoming a journalist and author. Jemma comes from a creative family, where her father is the composer Jeff Wayne who wrote the musical ‘The War of the Worlds’, based on the HG Wells novel, her brother Zeb Wayne is an acclaimed DJ and her sister is the actress Anna-Marie Wayne.  Jemma’s first novel, After Before, was published by Legend Press in 2014. It was long-listed for the Bailey’s Women’s Prize for Fiction, the Guardian’s Not the Booker Prize and was short-listed for the Waverton Good Read Award.

Jemma’s writing is regularly featured in the Evening Standard, Independent on Sunday, Jewish Chronicle and she is a columnist for The Jewish News and a regularly featured blogger at The Huffington Post.  Jemma Wayne’s first non-fiction title, Bare Necessities – a tongue-in-cheek guide to being a grownup – was published by Piatkus Books in 2004. Her play, Negative Space, ran at The New End Theatre, Hampstead, in 2009 to critical acclaim. Jemma lives in North London with her husband and two small children.

Continue on the Chains of Sand blog tour

If you’d like to find out more about Jemma and Chains of Sand, do visit the blogs below for news, interviews and exclusive content. Alternatively, you can search the #ChainsofSand hashtag on Twitter and follow Jemma on @writejemmawayne. 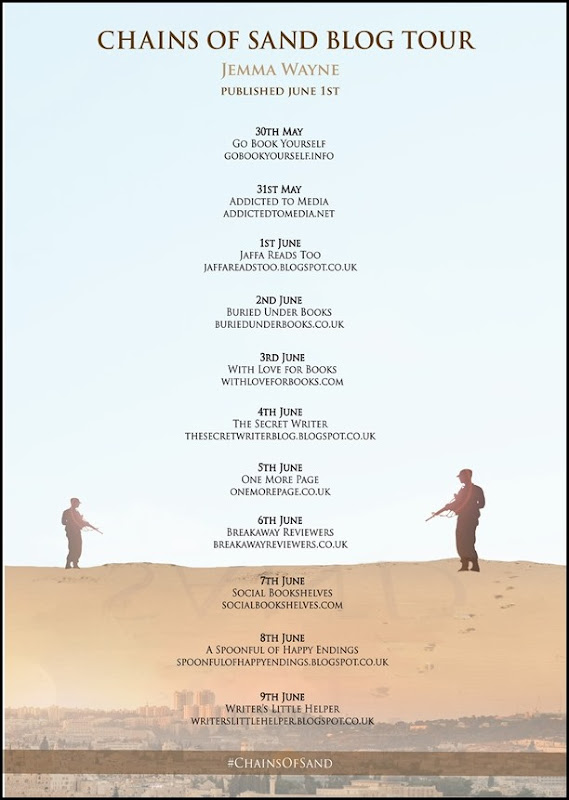