Review: Marieke Nijkamp's Stunning Debut 'This Is Where It Ends' 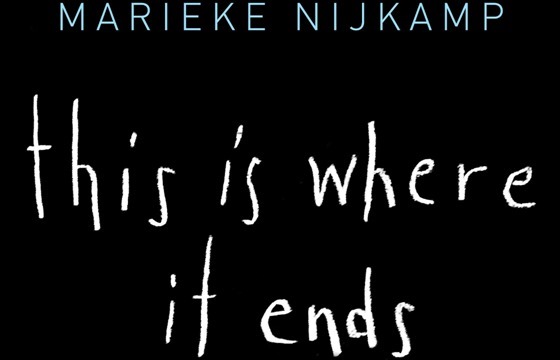 It all begins at 10am on the first day of the new semester. While all the students are in the auditorium listening to the principal give her welcome speech, somebody is surreptitiously locking the exits leading to the outside. At 10.05am, that somebody starts shooting.

Told from the perspective of four students from Opportunity High School, This Is Where It Ends is the impressive debut novel by Marieke Nijkamp. The novel takes place over just 54 minutes but the author delves into the history of each of the four narrators and their relationship with the perpetrator Tyler.

Claire is a track star and formerly dated Tyler. She is training when the shooting begins but her brother Matt, a lupus survivor, is inside the auditorium. Autumn is Tyler’s sister, once close to him but the death of their mother forced them apart. Sylv is Autumn’s girlfriend. She shares a dark secret with Tyler, one that fills her with dread and fear. Tomas is Sylv’s brother and is determined to discover what secrets Tyler is hiding. Like Claire, he is not in the auditorium when Tyler starts shooting.

And then there is Tyler. Bullied and outcast, Tyler blames everyone for his pain and is unable to overcome the loss of his mother and the later estrangement from his sister. This is where his story ends. 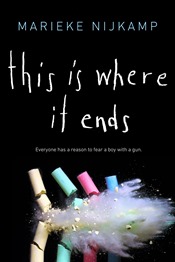 This Is Where It Ends is riveting and commendable on many levels. Nijkamp is the founder of DiversifYA, an initiative to drive diversification in Young Adult novels. This is evident in the novel with the inclusion of diverse characters including a child with lupus, an LGBTQ couple and two Hispanic siblings. What sets the book apart from others is that the characters weren’t portrayed as parodies of their identities and in fact, they weren’t really remarkable save for the unique thoughts and personalities that emerged in the book.

Ultimately, This Is Where It Ends is a glimpse into the life of a teenager who feels increasingly alienated and excluded from society. While many children would be given help and support, Tyler is increasingly left to his own devices until he begins to make some very bad choices. And choices they are. Tyler is not  two-dimensional, he is not simply evil but he is teenager who is unwilling or unable to accept responsibility for his own actions.

I give This Is Where It Ends by Marieke Nijkamp a superb five out of five stars and would highly recommend this thrilling debut novel.