“You know, this is the second time you’ve taken me to a band’s last concert” complains my friend Mike as we wait for Does It Offend You, Yeah? to start their gig. He’s right, of course. A year ago I dragged him out to see the last Klaxons gig and like tonight his first introduction to the band was with my invitation. In a very big way, I don’t want to be here either, just as I didn’t want to be at the Shepherd’s Bush Empire last November. It is one thing to like a band, to download one or two of their tracks. It is another thing entirely to fall completely head over heels with a band, to play them to death on your iPod and count sleeps until their latest release. Or to dread their final gig like it is the End of Days.

Yet here we are at Camden’s Electric Ballroom because I wouldn’t miss this gig for the world. We’ve arrived late, completely missing the two support acts in favour of a fajita at Camden Market and we grab a quick drink before taking our place in the audience.

DIOYY burst onto the stage with customary aplomb to the intro from”Wrestler”. They dive straight into a shaky performance of “With A Heavy Heart (I Regret To Inform You”. James Rushent keeps dancing about the stage and forgetting to sing into his microphone and I can’t hear the customary bassline and guitars. I’m beginning to worry and I remark to Mike that it would have been nice if James had turned up sober and it is possibly the least charitable thing I’ve ever said about the band I’ve worshipped for 8 years.

Then as if he is reading our minds, James admits that he is a little out of practice after a couple of years down at the pub. The band then launches into a triumphant rendition of “Being Bad Feels Pretty Good” and any doubts I might have had, traitor that I am, are long forgotten.

Then we are in for a treat as the band play us their brand new track “Let’s Go”.

Aren’t they supposed to be breaking up? No wait, they did break up, shortly after the release of their second album and this is meant to be their final live performance ever. So why are they playing new tracks? It sounds like I’m complaining but I’m really not complaining.

I guess I’m hopeful and that I hope that this isn’t the last we’ve heard of the little quintet from Reading. Which reminds me? Has anyone else noticed a Chloe-sized hole on stage?

Back to the gig. I’ve decided that I really, really like “Let’s Go” and would very much like the band to bring out a new album but I don’t get much time to think about that because James then announces that next up is the first song they ever released and the roar from the crowd is deafening. “Battle Royale” is epic and during the synthesizer solo everybody’s hands are up in the air as we grasp at the memories the band has given us. I’m thinking of Exit Festival, 2010 but in that moment I know that this will be the moment I think back to in future every time I hear this track. 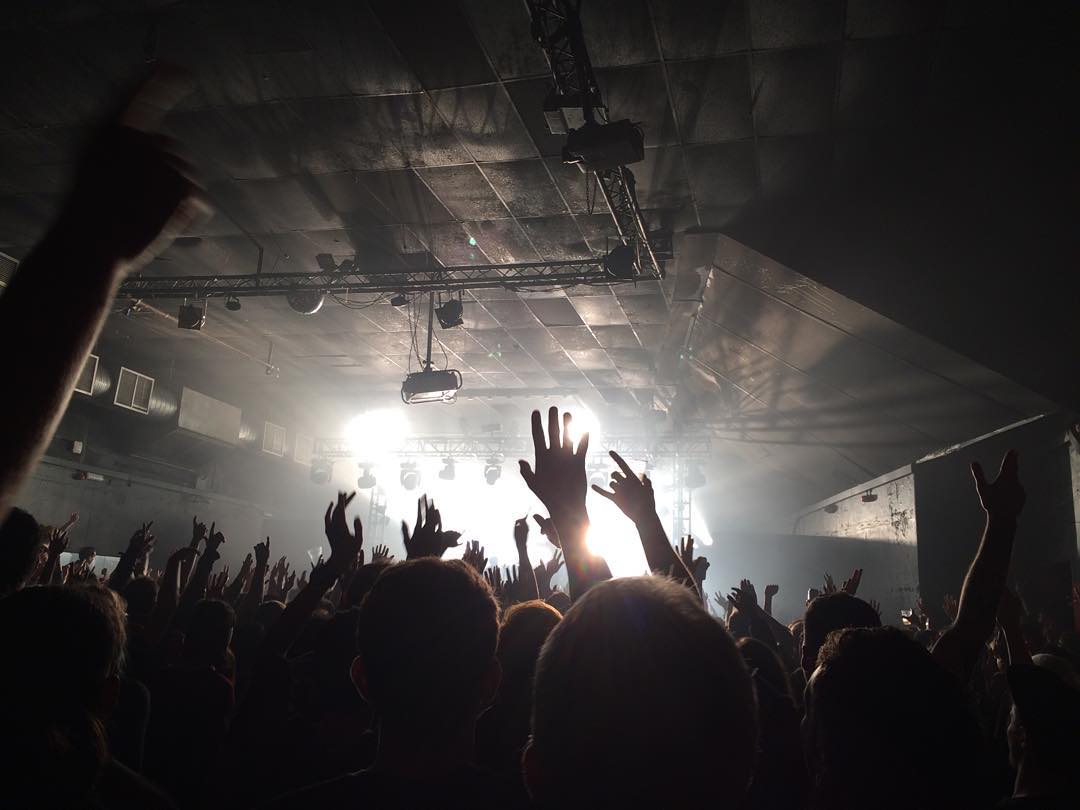 A barnstorming version of “We Are The Dead” follows, to which Mike notes that you can’t help but dance to this band. And by dance, he means jumps up and down like a mad man. He is not alone. “Doomed Now” follows and then there is another live debut of new track “Stormy Weather”.

By now, I’m beginning to strongly suspect that this is in fact not the band’s final gig but an elaborate ruse to get us out to support them and announce that they’re making music again. Would I be offended if this were the case? Of course not.

The next part of the show is peppered with some of my favourite tracks including “Attack of the 60ft Lesbian Octopus”, “Weird Science” and “Dawn of the Dead”. Well, to be honest, most of the tracks DIOYY has ever released have been favourites of mine but I still maintain that these were my favourite favourites.

Next up is “Wondering” and the band are joined on stage by guest rapper Trip and James Rushent’s stunning younger sister Amy. I stand transfixed watching the stage and thinking to myself that we need to see more of this talented young woman – she needs to form a band of her own!

“Survival of the Thickest”, “Let’s Make Out” and “John Hurt” follow and by now James is warning the audience that their time has run out. “No”, I want to scream, “not yet! Don’t let this be the end”. But time is indeed running out and DIOYY have a 10pm curfew.

The band launch into raucous versions of “Yeah!” and “The Monkeys Are Coming” and suddenly they are gone.

Well, the crowd is not having that and in the time-honoured tradition of audiences around the world, a foot-stomping demand of “more!” is soon heard.

And they don’t disappoint. As with the opening track of the evening, we soon hear the strains of the “Wrestler” intro and the fans are chanting along like their lives depend on it, like this moment and this crowd are all that will ever matter. I’m screaming along “because you have all made it to the dance, ‘cause believe me this is the dance!” and it kicks off. This is DIOYY at their very best and the crowd are loving it. They launch into “We Are Rockstars” to an equally appreciative reception before finally toning it right down for (what else) “Epic Last Song”.

And it is epic. It is an evening to remember and a reminder why I love this band so much. My head is telling me that it is over but my heart is praying for another album and many more concerts. Or just one more concert. Yes, I think as I file out of the venue, one more album and one more concert would do very nicely, thank you very much.

Does It Offend You, Yeah? setlist
December 12, 2015: Electric Ballroom