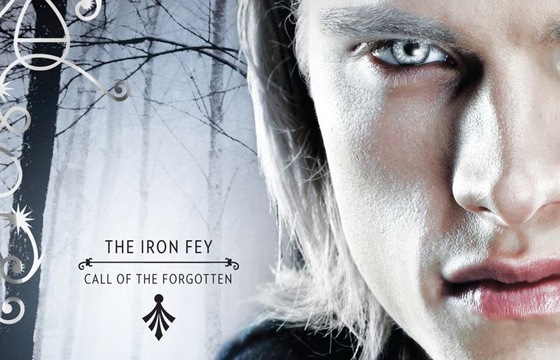 The situation in the faery realm is dire. Keirran, prince of the Iron Realm, is missing and his fey girlfriend Annwyl is dying, exiled from the Summer Court and doomed to fade from existence. Meanwhile, Ethan Chase has problems of his own. Dragged into the Nevernever and fey affairs against his will, it seems that people noticed when he and his girlfriend Kenzie disappeared for a couple of weeks. Against his better judgement and under considerable pressure from Kenzie, Ethan agrees to help Annwyl search for Keirran.

Little does he know that the Iron Prince will stop at nothing to save Annwyl from the Fade.

Sequel to The Lost Prince, The Iron Traitor is the second book in The Iron Fey: Call of the Forgotten series and sixth book in Julie Kagawa’s New York Times bestselling series The Iron Fey. The Iron Traitor begins with the fallout from The Lost Prince, with Kenzie’s parents furious at her disappearance and subsequent hospitalisation and Ethan in a fair amount of trouble in school as the rumour mill begins to turn.

Then Annwyl turns up on Ethan’s doorstep (well, in his bedroom to be precise) and Ethan agrees to travel with her to New Orleans to track down Keirran at the goblin market. Will they find him before he bargains away far more than he can afford?

In this gripping novel, Julie Kagawa really comes into her own as she delves into the mind of an obsessed faery who will stop at nothing to save the girl he loves. It is a fascinating study in obsession and the detrimental effect it can have on an individual and those around him. Nothing Keirran says or does is logical or reasonable, he is simply driven to extend the life of Annwyl no matter the cost.

It is interesting to contrast this with Kenzie’s acceptance of her own condition and the respectful distance Ethan gives to her to work through her feelings about dying. Dying from childhood leukaemia is as unnatural and horrific as fading away due to exile from the Nevernever by a faery queen but Annwyl and Kenzie have completely difference reactions to their plight. It is interesting to see how much agency Kenzie assumes in confronting her condition compared to how much of a victim Annwyl has become. Whether this is because of Keirran’s excessive reaction or due to her own personality is not clear.

Whatever the case, author Julie Kagawa’s insight into the human (faery?) psyche is impressive and makes for some of the most impressive character development I’ve seen in a novel for some time. 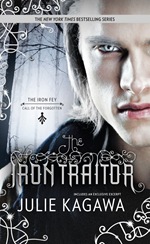 As Kagawa dives deeper into the murky depths of Keirran’s determination, the book hurtles towards its inevitable conclusion. It is clear from the title of the book that there is going to be a significant betrayal and even though the Iron Traitor isn’t named, it is pretty obvious throughout the book who it will be. Despite knowing exactly what was coming, nothing can prepare the reader for that final, dastardly betrayal in the last few pages of the book.

In the back of my mind, I’d hoped that there would be a reasonable explanation for the visions and prophecies but in the end, it was just horrible.

Which is not to say that I’m complaining. I’ve always said that I had an uneasy relationship with The Iron Fey series but in The Iron Traitor Julie Kagawa has managed to create a set of characters that the reader cares deeply about and therefore it was always going to be painful when truly awful things happened to them.

For superb character development and an ending I cared about, I give The Iron Traitor by Julie Kagawa five out of five stars and would highly recommend to all fans of young adult and paranormal fiction.