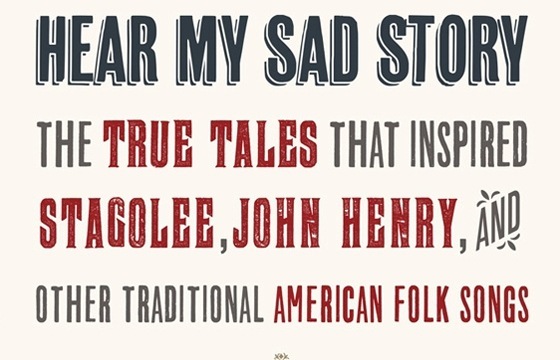 May 2015, Hammersmith Apollo, London. Nick Cave finally responds to the crowd's baying requests and plays "Staggerlee" from his 1995 album with the Bad Seeds, Murder Ballads. Transfixed, I stand watching the performance, hanging onto every word and think to myself, there's a great story behind this song.

And there is. In Christmas Eve 1895, "Stack Lee" Shelton entered the Bill Curtis Saloon in St Louis and got into an argument with Billy Lyons. Stack Lee mashed Lyons's hat and Lyons responded by grabbing his white Stetson. Stack Lee drew out his Smith & Wesson .44, Billy drew out his knife and bang! Stack Lee shot Lyons in the belly and left.

This is just one tale in a fantastic new collection of stories by Richard Polenberg. Hear My Sad Story: The True Tales That Inspired "Stagolee," "John Henry," and Other Traditional American Folk Songs.  Painstakingly researched and thoroughly entertaining, in this book Polenberg describes the historical events and true stories behind America's most famous folk songs.

While some of these songs have been quite colourful (I'm thinking specifically of Nick Cave's "Staggerlee") that's nothing compared to the truth behind the lore and in many cases truth really is stranger than fiction.

There is the incredible story of Omie Wise, who was drowned in the Deep River, North Carolina in 1807. The murder of this pregnant woman over 200 years ago had quite the impact on the area and now there is a Naomi Falls, a Naomi Bridge and even a large cotton mill named Naomi Falls Manufacturing Company.

What is most notable about the collection is that beneath the entertainment value there is a real indictment of an inequitable and unfair legal system in which African Americans were very often guilty until proven innocent and in many cases they were convicted with the flimsiest of evidence. 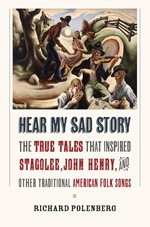 In “Duncan and Brady”, we learn about Harry Duncan who was convicted for the murder of policeman James Brady. Testimony that would have exonerated him was dismissed as hearsay and the weapon used in the murder was not considered relevant for evidence.

Of course, the sad stories that form the basis of our beloved folk songs aren’t always about wrongful convictions. There was no doubt that Frankie Silver killed her abusive husband Charles but no amount of public pressure and understanding of her predicament could prevent her from going to the gallows.

Not all of the stories behind our most famous songs are known. For example, nobody knows who first wrote ”House of the Rising Sun”, the most famous version of which was recorded by The Animals. There was once a Rising Sun Hotel in New Orleans but it burned down in 1822. Given the subject matter, it is more likely that the song stems back to the colourful period where prostitution was legalised in New Orleans at the turn of the 20th century. In the chapter “House of the Rising Sun”, Polenberg tells us about this period which included racial segregation of brothels and even a white pages of sorts to prevent patrons from being swindled.

Of course, some stories are so famous that they permeates ever corner of popular culture. No bandit has had more songs written about him than the outlaw Jesse James and he was of course the subject of the famous Brad Pitt film The Assassination of Jesse James by the Coward Robert Ford. (Incidentally, if you’ve never heard the superb score for the film by Nick Cave and Warren Ellis, you should rush out and do so immediately).

Not only does Polenberg discuss the famous story of Frank and Jesse James, he also tells the less well known story of Cole Younger who so captured the imagination of people that songs about him were released during his own lifetime.

Fascinating and well-researched, Hear My Sad Story provides a backdrop to some of the world’s most famous folk songs. Listening to the old folk tracks on YouTube as I went along, I was fascinated by how many of the songs I recognised and was certainly familiar with some of the names like Frankie and Johnny and of course, Stagolee.

I give Hear My Sad Story: The True Tales That Inspired "Stagolee," "John Henry," and Other Traditional American Folk Songs by Richard Polenberg a superb five out of five stars and would highly recommend to lovers of blues, jazz and folk music and anyone whose imagination has been stimulated by a murder ballad.

Hear My Sad Story is available on Kindle and hard cover from Amazon.co.uk