It's not often that I find myself in a position like this. I was so impressed by Lauren Oliver's dystopic novel Delirium that I put off reading the sequel Pandemonium for some time, for fear that the spell would be broken and that I would not enjoy it as much. The problem I face now that I have read it is what can I possibly say that I didn't already say about Delirium? Like Delirium, Pandemonium is impossible to put down, the events in the novel are devastating, and there is simply nothing predictable about this book (except, perhaps, for the very last page). From the moment I first picked up Pandemonium, any moment spent not reading it was a wasted moment. Meals and sleep became optional and I stole from both in my efforts to race through the book.

Pandemonium is the second book in Lauren Oliver's Delirium trilogy. The events in the book follow on immediately from those in Delirium and begin at the moment Lena and Alec are separated at the fence. We follow Lena’s grief-stricken attempts to survive in The Wilds and this is juxtaposed against her new life in New York City some months later. When Lena attends a rally for pro-cure organisation Deliria Free America, she is kidnapped alongside Julian Fineman, son of the DFA leader and leader of the youth division. Each moment that the couple spend imprisoned places Lena more at peril as Julian digs deeper to discover her true, uncured status. 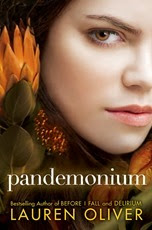 Whereas many trilogies suffer from a weak second book that is often nothing more than a long, drawn out filler between the first and last books, this is certainly not the case here. I didn’t think it possible but Pandemonium is even better than Delirium and this time I will waste no time in picking up Requiem, the final book in the series.

Fans of Lauren Oliver will not be disappointed and her beautiful style of writing is as present in this novel as it was in Before I Fall and Delirium. I wholeheartedly recommend this book to all fans of young adult or dystopian fiction, especially those who might be looking for a trilogy that is a cut above the normal young adult fare. I give Pandemonium five out of five stars.

You can purchase Pandemonium at Amazon.com or Amazon.co.uk.