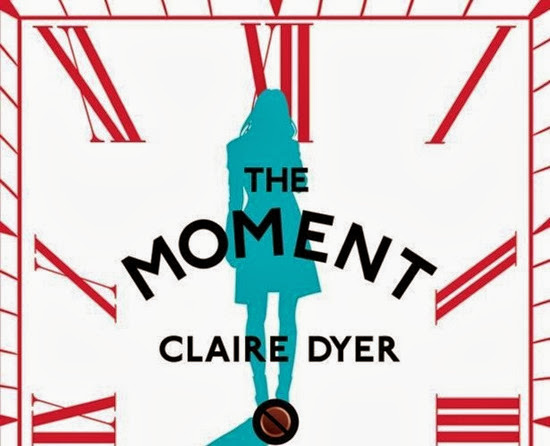 London, 9am. One morning during the chaos of the morning rush, Fern and Elliott spot each other across the concourse at Paddington Station. They have not seen each other in 25 years, not since that day when they parted on such dire terms.

Drawn to each other, they stand separated by the chasm of their break up and the marriages, children and divorces that happened in the meantime. Fern gives Elliott her phone number and knowing that they'll both need to pass through Paddington that evening, they agree to meet up again at the end of the day.

But there is no escaping that Fern and Elliott broke up for a reason, that it meant something at the time just as their lives mean something now. Yet as the day progresses, neither Fern nor Elliott can help but remember the past, replaying the magic moments when they met and the life they shared together. Could one day erase the biggest mistake that Elliott and Fern ever made?

The Moment is the debut novel from award winning poet and writer Claire Dyer. It is perhaps inevitable that it would be compared to David Nicholls’s One Day and not just because of the Louise Candlish quote on the cover declaring it to be ‘this year’s One Day’. It is a novel about what ifs and the passage of time, of two people whose lives and decisions remain intertwined despite the time they have spent apart.

Claire Dyer has written The Moment in a really interesting manner and she plays with the concept of the reliable narrator.  The book is written in the third person, alternating between Fern and Elliott’s point of view and up to a point, the reader would be excused for thinking they know exactly where the story is going. Yet as the day progresses and the initial surprise of meeting each other wears off, Fern and Elliott begin to see their relationship, break up and current lives in a different light. The Moment reflects life’s complexities and how emotions colour both our perceptions and actions.

One of the aspects I most appreciated in the book was the notion that Fern and Elliott might have matured in the years since they were together but certain personality traits remained the same. The Moment surprised me in the depth of character development and insight into the two protagonists which caused me to be more invested in the outcome of the story than I had anticipated.

Ultimately, the conclusion of The Moment was not one that I was expecting but it was one that I truly appreciated (if indeed my interpretation of the twist was correct). The Moment is an enjoyable read with loads of great pop culture references to the 80s and 90s. I would give the book four stars out of five and would recommend to fans of romantic fiction.