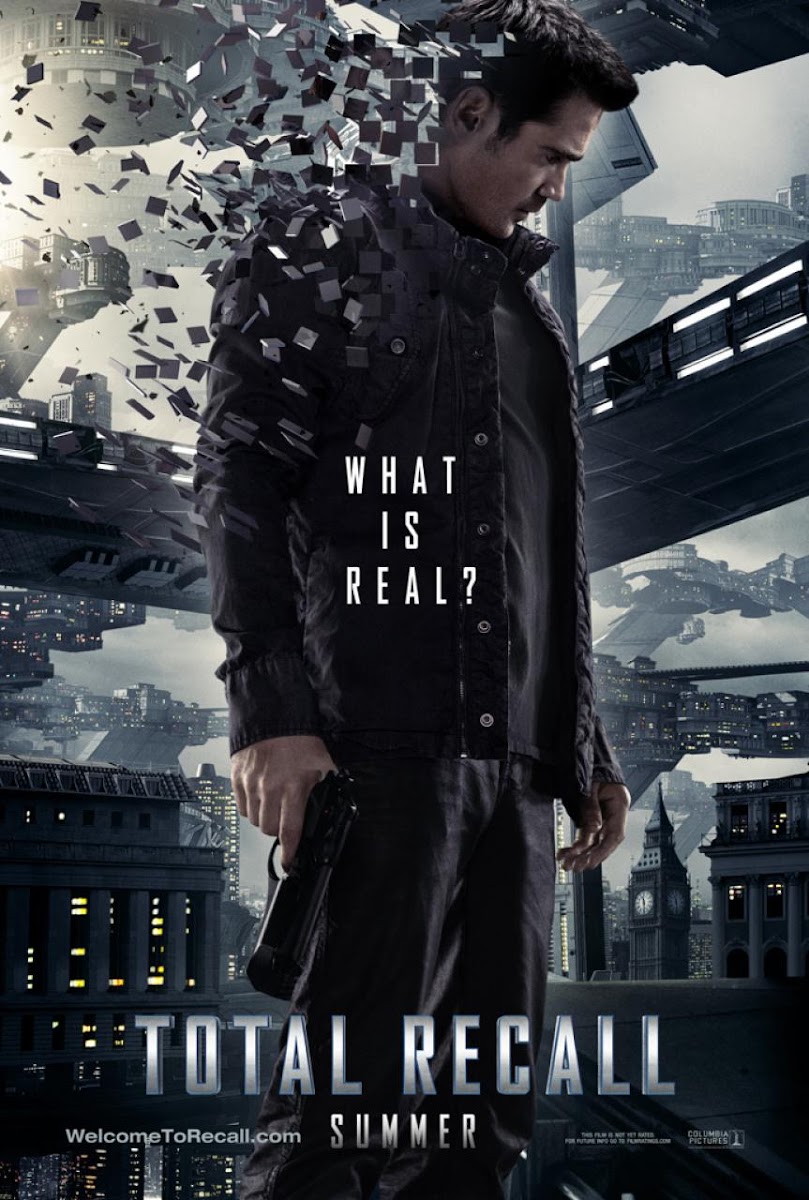 When I heard that they were remaking the 1990 film Total Recall, I was pretty suspicious. I didn't think the film would be more loyal to Philip K Dick's original short story, and I thought it would be another pointless reboot.

Ten weeks later, as I watched the beginning of Len Wiseman's Total Recall (2012), I was ever more doubtful as we learn that this film is not set on Mars but a dystopian Earth.

I was prepared to hate it but loved it instead.

The difference between Total Recall and this one is that while I loved the former for its quirkiness and so-bad-it's-good cult appeal, I actually think Total Recall (2012) is a pretty great film with fantastic world-building, brilliant special effects and breath taking fight scenes.  Oh, and it stars a pretty fine-looking Colin Farrell too.

Total Recall (2012) is loosely based on Philip K Dick's short story "We Can Remember It For You Wholesale", more loosely so than the 1990 version.

In this version, chemical warfare at the end of the 21st century reduced the Earth to two habitable areas: the United Federation of Britain (formerly UK and Europe) and the Colony (formerly Australia). In typical imperialist style, the UFB colonised what remained of Australia and reduced the population to working drones.  Workers are transported through the core of the Earth to UFB each day so that they can work on production lines assembling the robotic, synthetic police force that maintains order in UFB (which I’m going to call Synths because I think that’s what they were called). 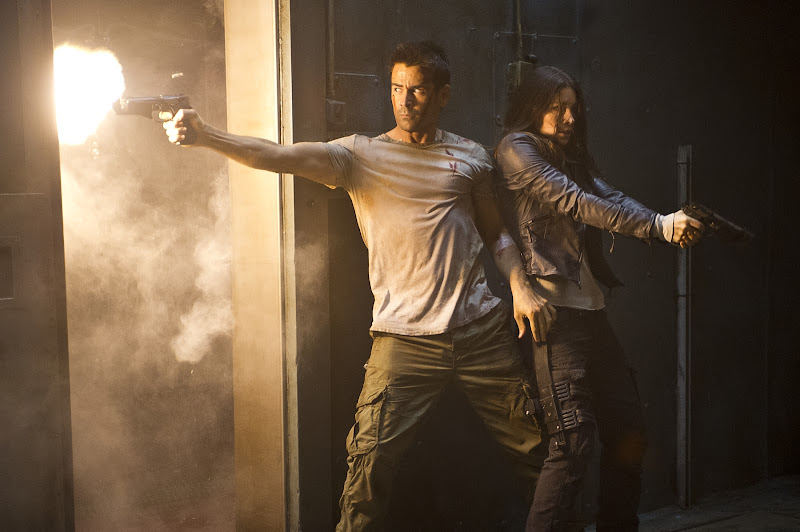 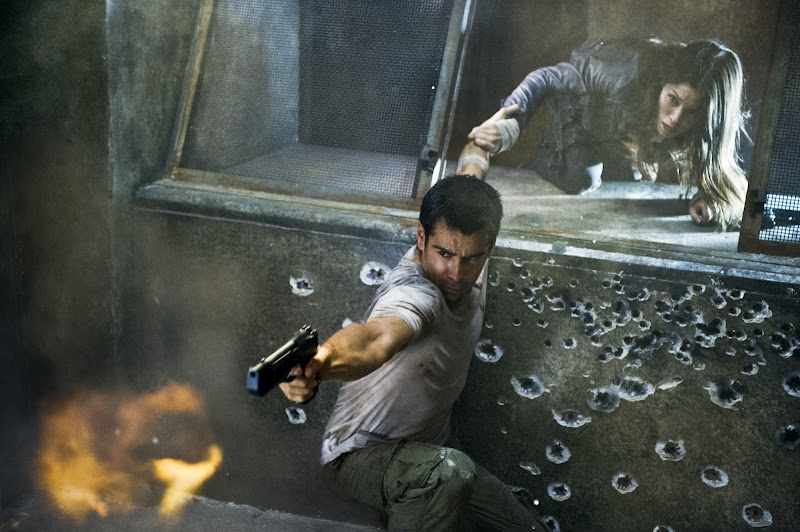 Colin Farrell is Douglas Quaid, a Synth assembly worker who dreams of fantastic, adrenalin-filled fight scenes each night and eventually goes to Rekall to have memories of being a spy implanted in his brain.  There’s only one problem – he already is one.

Writers and filmmakers seem obsessed with dystopian worlds these days but I still quite liked the idea of the Colony and the UFB getting back to her imperialist roots.  I loved the concept of The Fall, the gravity elevator linking UFB and the Colony.  Sure, the science behind it was completely dodgy considering what would actually happen if you travelled through the centre of the Earth from Britain to Australia in 17 minutes, but I’m not deducting any points for that. 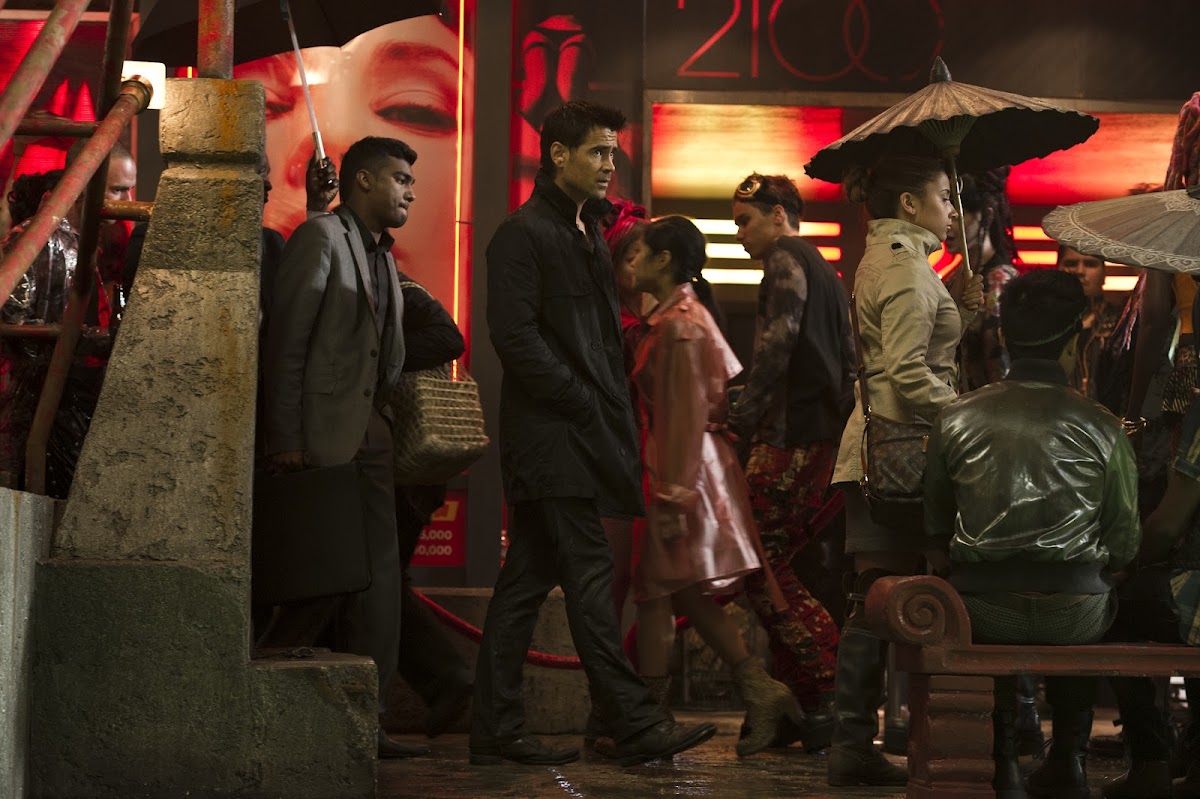 I loved the conceptualisation of the Colony.  Originally intended to be called New Asia, the Colony was a clash of Steampunk, Russian and Asian influences with bright lights, perpetual darkness and fabulous fashions.  The Colony was overpopulated, crazy and futuristic with creepy, box-like, disjointed apartments and general chaos. If the vertical and horizontal slum-style development ever came into style, with towering hulks of buildings constructed upon buildings, the Colony would be it.

In contrast, the United Federation of Britain which was daylight where the Colony was dark, again with towers upon towers but this time full of modern, London-chic style buildings.

I have always loved the idea that highways will expand vertically in the future with grids of traffic flows both horizontal and vertical and this was no exception.  I loved the magnetic powered vehicles weaving around all that remains of the Houses of Parliament, the clock tower.

I really liked the Synths.  Part Stormtrooper, part marionette with incredible agility, I just loved the way they looked, acted and moved.  I guess they had human actors inside and I liked that. 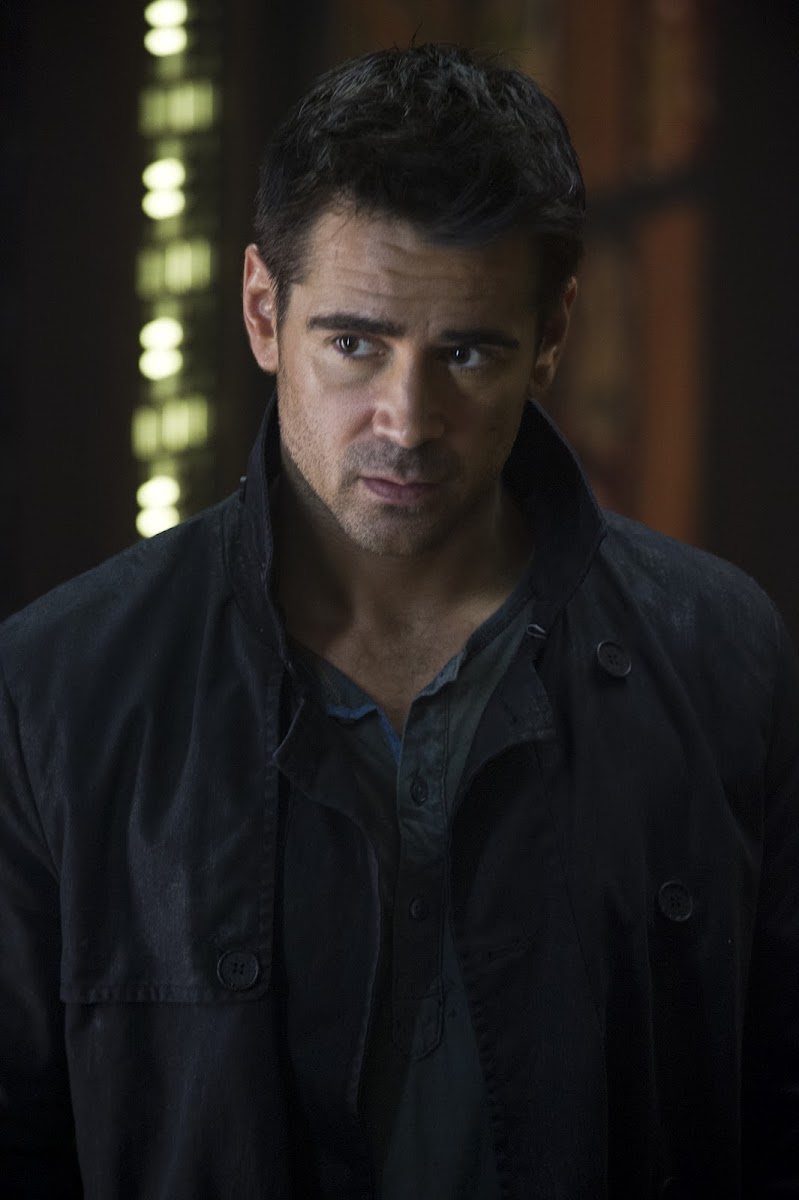 Colin Farrell was surprisingly good. That's not really fair to say. I was a massive Colin Farrell fan about ten years ago until he turned out to be a drunken lout and was photographed walking unwashed, unshaved and barefoot around a Cape Town store with tracksuit pants and a horrendous beany covering his oily, unwashed hair. But now he's back and he's lovely and I remember now why I liked him so much - he is a damn fine actor.

I really liked Kate Beckinsale and her smoky psychotic eyes, so much so that I want to watch her Underworld films now. Of course, it got to a point where I just wanted her to die but think that was kind of the point. 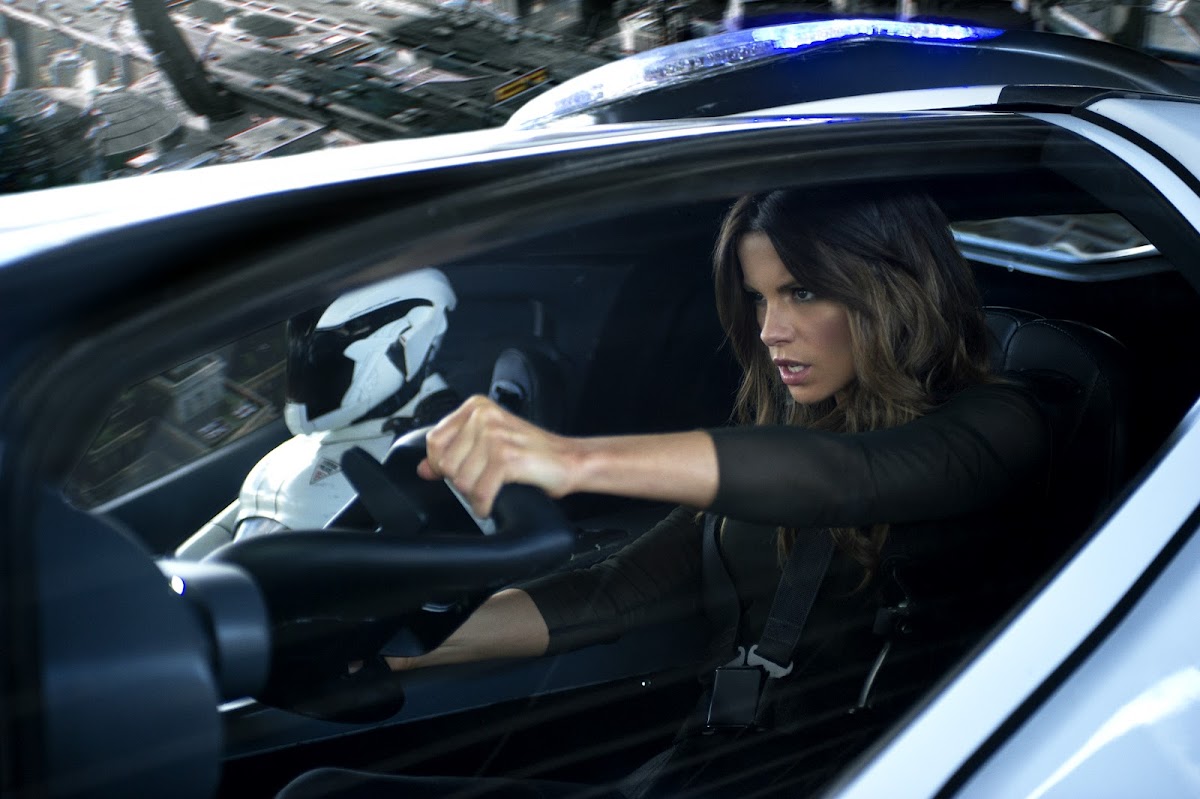 What I Thought Was Okay

I kept waiting for a twist but it never really came. There are no massive reveals here as I guessed precisely who Doug Quaid was and what had happened to him. That didn't detract at all from my enjoyment of the film and I enjoyed piecing it together as much as I enjoyed the fast pace and non-stop action.

Bryan Cranston (Breaking Bad) played Cohaagen, the main protagonist of the film.  I thought he was okay but I wasn’t too impressed by his plot.  But hey, when did we ever let a weak plot ever get in the way of a good film?

Melina (Jessica Biel) was certainly pretty but her role in the film was pretty much limited by Quaid’s inability to remember her.  Maybe I’m just not ever going to get Jessica Biel.  For some crazy reason, I always mix her up with Elizabeth Shue and Elizabeth Berkley.  And Jennifer Grey.

Then again, maybe it was the fact that they only named her Melina, with no surname or concrete backstory.

What Melina lacked in character though, she more than made up with in agility, weapon-control and fighting skills.  And patience.  If my boyfriend woke up one day and couldn’t remember me anymore, I’d freaking give him a black eye. 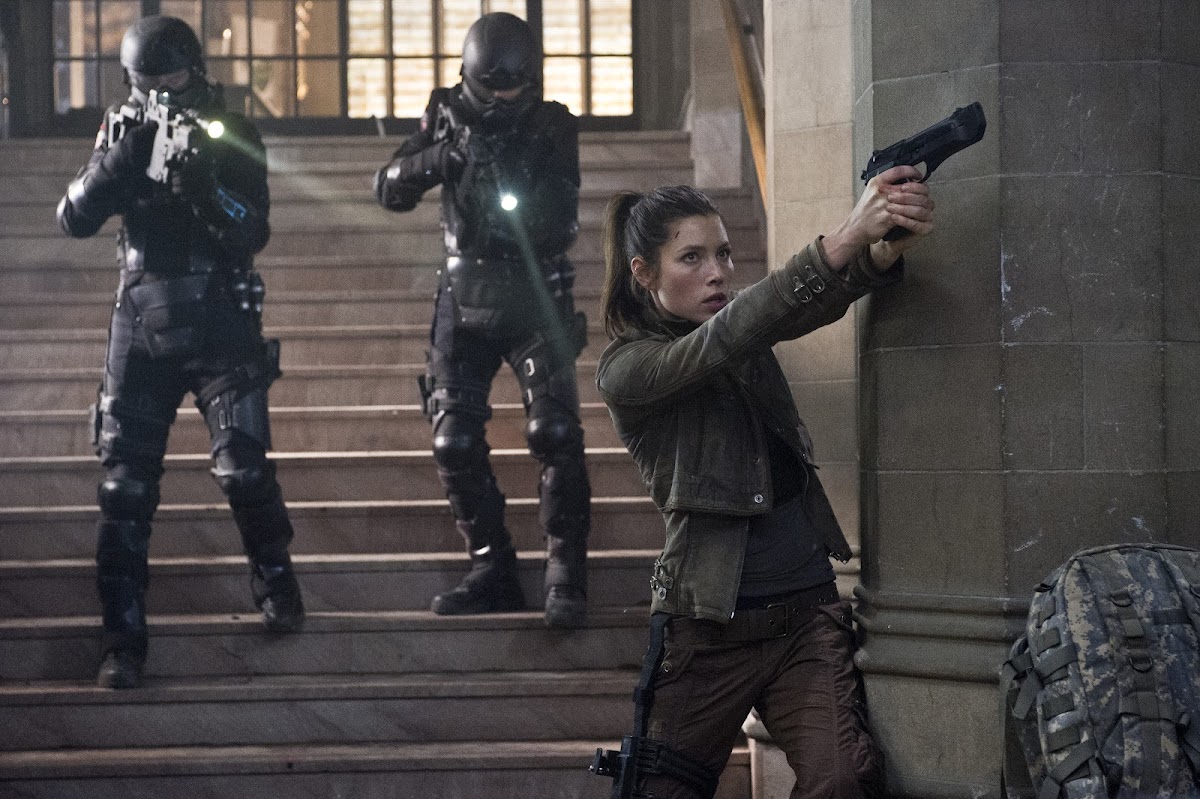 What Missed the Mark

Half a point off for the depiction of the London Underground. It was definitely filmed elsewhere and everything from the platforms to the tiles to the trains was more likely to be American (perhaps filmed in the Mexican Metro system, like the original?)  It was a real pity but for a Tube-phile like me, it was slightly distracting.  I would have liked to have seen more rounded tunnels, rondels and red-and-grey carriages.

So, while the rest of the critics slated this film and it scored a rotten 29% on RottenTomatoes.com, I loved it and give it a healthy 4.5 stars out of 5.  And please, Mr Farrell, more films please. 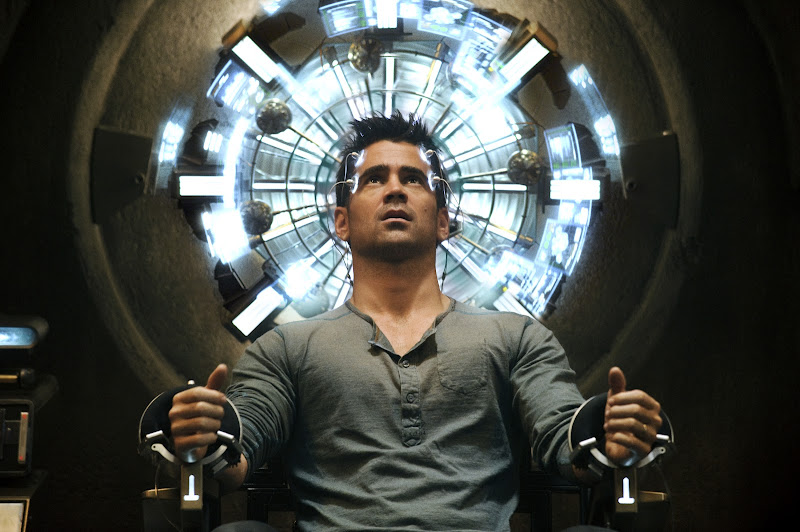 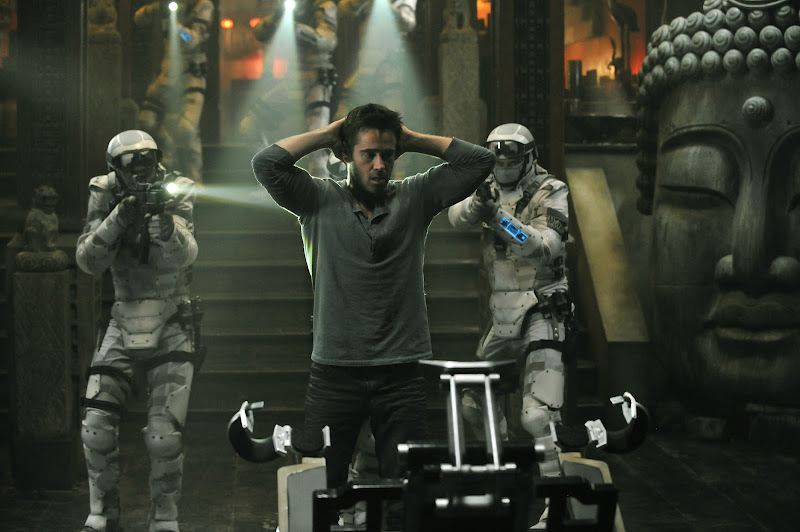 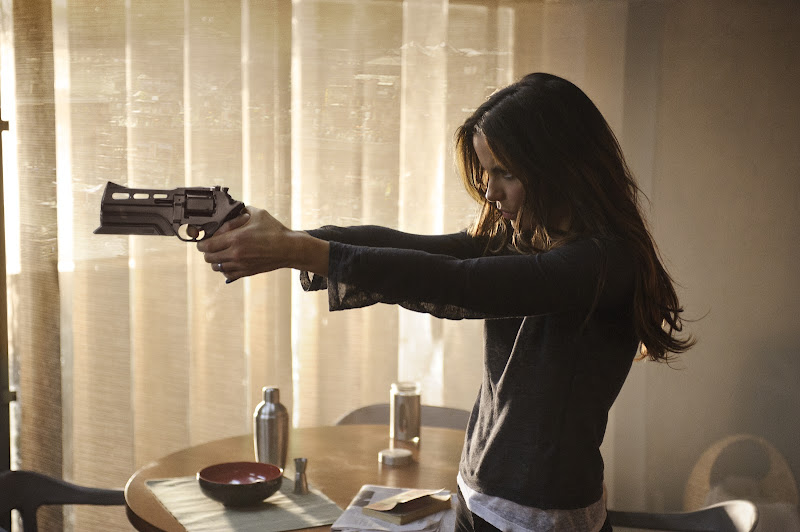 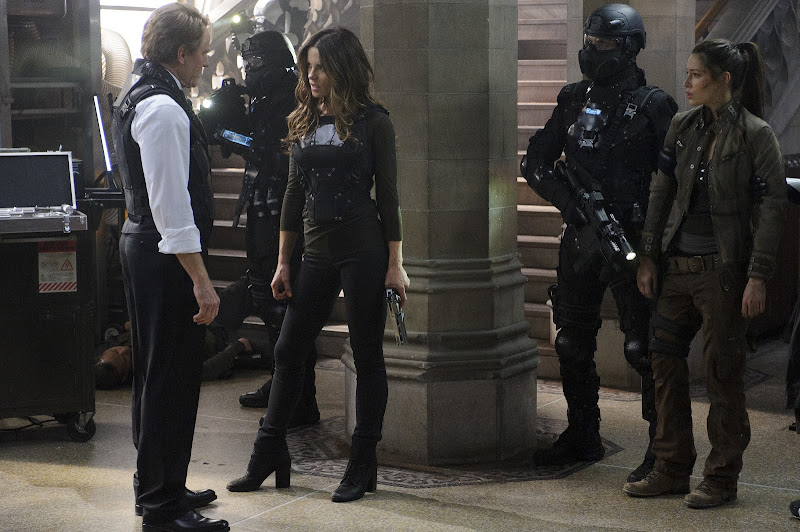