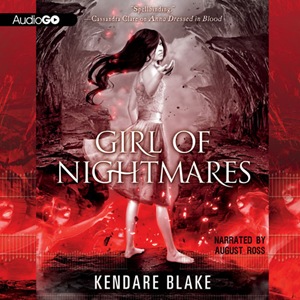 Anna Dressed in Blood was a darkly atmospheric horror story by Kendare Blake.  Terrifying in parts, it told the story of ghost hunter Cas Lowood and the ghost who changed his life.  It was beautifully written, almost lyrical and poetic in parts, and was ultimately devastating.

While I knew that a sequel for Anna Dressed in Blood had already been penned, I nevertheless felt at the time of reading that it would have been perfect as a stand alone novel.  Having listened to the audiobook sequel Girl of Nightmares, I still feel that way.

Girl of Nightmares picks up six months after the events of Anna Dressed in Blood.  As Cas and his friends Thomas and Carmel struggle to pick up the pieces and carry on with their normal lives, it becomes increasingly clear that whatever happened to Anna isn’t good and it certainly isn’t over.  The problem is that Thomas and Carmel have their own problems and when Anna begins to appear to Cas both in dreams and in waking nightmares, he doesn’t have their support.

Girl of Nightmares sees the trio travel to England and Scotland to track down the mysterious Order of the Biodag Dubh as Cas becomes increasingly determined to embark on a solution that might just cost him his life.

It is unfortunate, but I really did not enjoy this audiobook reading of Girl of Nightmares.  Initially, I was surprised because none of the characters sounded like I expected them to.  Cas is a powerful ghost hunter and Thomas an equally powerful witch but narrator August Ross’s breathy, mild tones seemed to do them no justice at all.  This is to be expected with audiobooks though and is usually something you grow used to.

The problem occurred when Cas and Thomas went to London.  Seriously, no one here speaks like that.  Londoners no longer sound like Eliza Doolittle and possibly never did.  It was not just August Ross’s accents that jarred but Blake’s writing too. We don't actually call sausages ‘bangers’, the ‘north country’ refers to the north of England not Scotland, and heads were not displayed on pikes on Tower Bridge (mainly because beheadings stopped in 1747 and Tower Bridge was only built between 1886 and 1894).

I became quite nervous when I heard that the trio were travelling to Scotland, and sure enough, Ross’s accent was simply diabolical.

It has to be said, accents are extremely hard to do.  One has only to listen to the way they butchered the American accents in BBC’s Spooks to know that it can happen to anyone.  But it was both the narrator and the writing that went wrong with this one. Perhaps the accents wouldn't have been so obvious without the audio narration but I have been unable to read the novel since without imagingin the accents.

Beyond the accents, I missed the Thunder Bay, Ontario setting.  Everything about the journey to Britain felt clichéd from the mannerisms and accents, to their host’s library of ancient tomes, to the stuffy, sinister and Masonic-like secret Order of the Biodag Dubh.  Coupled with the trek through the forest, it simply felt like too much had been lifted from other novels.  I also felt that the gratuitous swearing detracted from rather than added to the story.

I would absolutely recommend Anna Dressed in Blood to anybody but unfortunately cannot say the same of Girl of Nightmares.  Not surprisingly, it seems that I am in the minority in my opinion so if you would like to do so, you can purchase the unabridged audiobook version of Girl on Nightmares narrated by August Ross from Audiogo.com.

Two stars out of five.