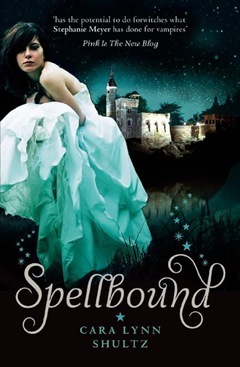 When I first read about Cara Lynn Shultz’s debut novel, I immediately wanted to read it.  Spellbound is a paranormal romance set in Manhattan’s Upper East Side and is somewhat of a mix between Gossip Girl and Secret Circle.

Sixteen-year-old Emma Conner arrives in New York to make a fresh start in life after suffering the tragic loss of both her mother and brother, and then abuse at the hands of her drunken step-father.  She enrols at Vincent Academy, a typically posh prep school in Manhattan and vows to keep her head down and remain invisible.

The last thing she expects to find is love, but Emma soon finds herself irresistibly drawn to Brendan Salinger, one of the richest and best-looking boys in school.  Emma soon discovers that this love brings with it a terrible curse and she learns that danger lurks in every corridor of Vincent Academy.

Spellbound ticks a lot of boxes but not always in a good way.  Fans of young adult fiction and several primetime shows will recognise many of the clichés in the story including the damaged heroine, the unbelievably good-looking and wealthy love interest, the gay best friend, and the weird gothic girl who turns out to be the coolest character of all.

Despite all of this, I thoroughly enjoyed Spellbound, far more than I expected as the story began to build in the opening chapters.  I liked the combination of prep school snobbery, burgeoning magic and supernatural hauntings and I especially liked the story-within-a-story as we learned about the curse.  Even excepting the curse and the paranormal elements of the story, the threats that Emma faces are absolutely plausible and there are some truly terrifying scenes in the book. 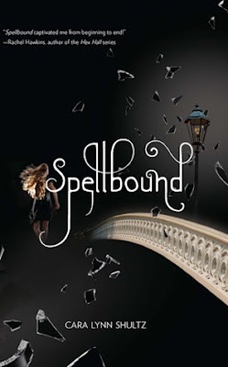 Given the title of the book, I initially expected Spellbound to be entirely focused on magic and imagined something along the lines of The Craft or Secret Circle, or even the Harry Potter franchise.  I was pleasantly surprised to discover that magic occupied a far more subtle place in the book in both its discovery and execution.  I found this quite refreshing and look forward to learning more in the next book.

There have been many occasions recently where I have found books to be gratuitously drawn out, with storylines inadequately resolved as the stage is so obviously set for a sequel.  I am happy to say that this is not the case with Spellbound.  There is indeed a sequel, Spellcaster, but the story in Spellbound was certainly resolved in a thrilling climax with just enough of a teaser to keep readers coming back for more.

I give Spellbound four out of five stars and I would recommend it to all fans of paranormal romance and young adult fiction.

Spellbound is published by Mira Ink and is available to buy on Amazon.co.uk or Amazon.com.