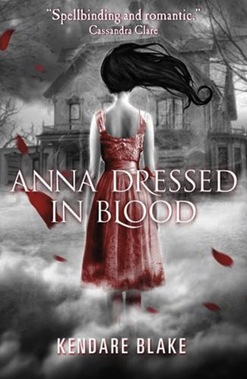 I knew exactly what I wanted when I went in search of my last book to read.  I wanted something dark and atmospheric, preferably with a paranormal or supernatural element, that would leave me breathless and swept off my feet.  I’ve read a lot of good books this year but it has been months since I was absolutely devastated by a book.  When I picked up Kendare Blake’s Anna Dressed in Blood, it certainly seemed to meet the requirements with its gorgeous cover and a title that just rolls off the tongue.

Cas Lowood is a ghost hunter who inherited his skills from his late father. He kills the dead using his father’s athame, relieving the world of vengeful, restless and violent ghosts.  When Cas and his mother travel to Thunder Bay, Ontario, neither of them expect that this will be anything other than a normal assignment.  But “Anna Dressed in Blood” is no normal ghost.  She is more violent and furious than any ghost Cas has ever encountered and far more powerful than he could ever have imagined.

As Cas unravels the horrific story surrounding Anna’s death, he finds himself confronted with the circumstances surrounding another murder: that of his father.  With the help of his mother, a powerful witch, and his friends Thomas and Carmel, Cas must complete his task and come to terms with his growing feelings for Anna.

Anna Dressed in Blood is absolutely terrifying in parts and has all the elements of a truly disturbing ghost story.  There are scenes that are absolutely shocking and Kendare Blake certainly resisted the temptation to sugar-coat any part of this book.  Her description of Anna is spectacular with the electrified, inky tendrils of her hair, her brute strength and her white dress dripping in blood.

The book is written in the first person from Cas’s point of view and it is easy to relate to this likeable, witty and intensely self-aware character.  It is a long time since I have liked a protagonist this much.

Most importantly, Anna Dressed in Blood is beautifully written with many of the passages as lyrical and poetic as the title.

“I like it more to come to a place like this, where the scent of death is carried to you on every seventh breath”.

I was hooked from the first and enjoyed every single page of this book.  It is the type of book that I can imagine reading time and time again and has me wondering if I don’t just prefer books with male protagonists.  It was everything I had wanted: dark, atmospheric, dramatic and utterly devastating.

I would certainly recommend this book to fans of paranormal, young adult fiction or, indeed, fans of Supernatural or The Secret Circle.  In fact, Anna Dressed in Blood was recently voted one of the YALSA 2012 Quick Picks for reluctant Young Readers making it an inherently readable book that readers would pick up and read for their own pleasure.

It has been announced that Anna Dressed in Blood will be followed up with a sequel, Girl of Nightmares but for once I can honestly say that it doesn’t need it.  The story was perfectly wrapped up in this instalment and Anna Dressed in Blood works well as a stand alone novel or as part of a series.  This might be of interest to readers suffering from young adult series fatigue!

I happily give Anna Dressed in Blood five out of five stars and will certainly be both reading it again and seeking out the sequel when it is released.

Anna Dressed in Blood will be released in paperback in the US on July 3, 2012 and can be pre-ordered at Amazon.com

. Readers in the UK can pre-order from Amazon.co.uk