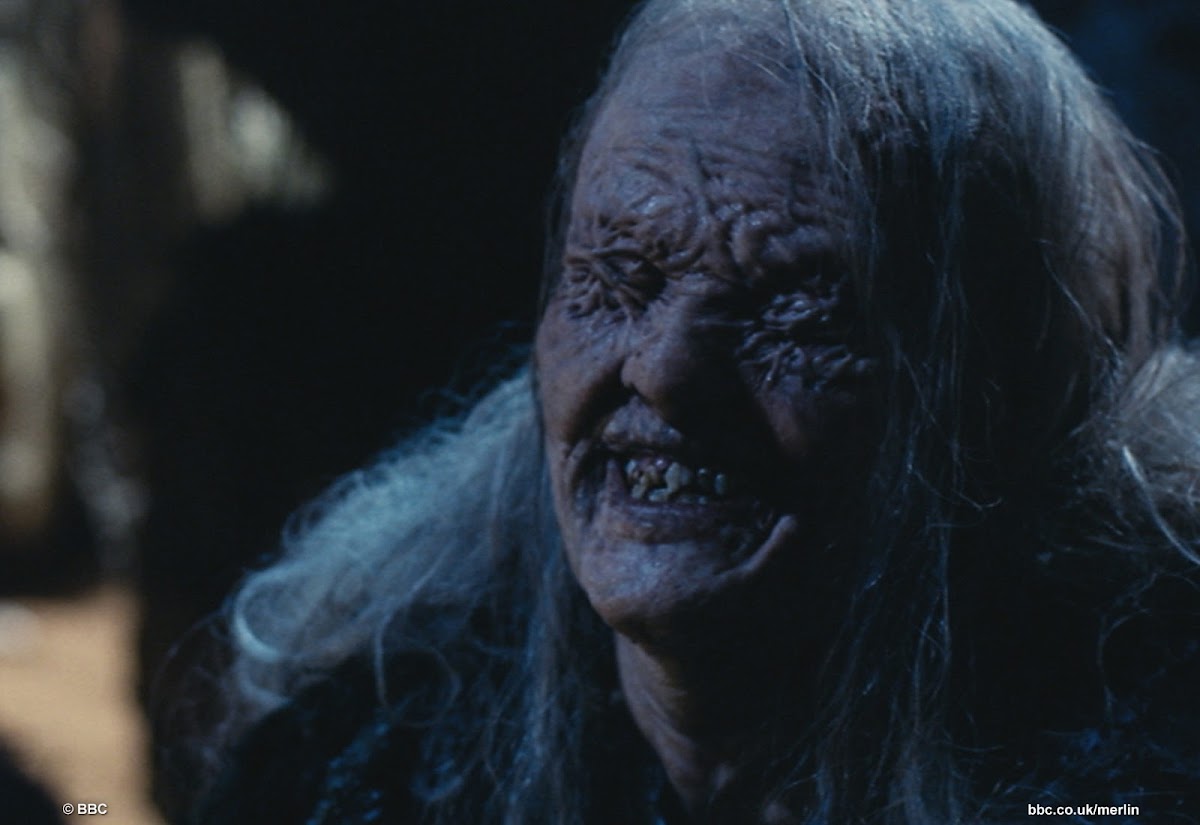 Well, it appears there are actually no limits to her depravity as Morgana visits the Dochraid, seeking her counsel on how to wield Morgause’s magical coin to raise a soul from the dead.  There is so much emphasis put on the destiny of King Arthur and Merlin but it seems that we underestimate the role that Morgana herself will play.

The Dochraid: “Morgana Pendragon, you are destined to bring back the old ways.  I hope to live to see that day”.

Morgana will indeed bring magic back to Camelot, but at what cost?  Morgana travels to the pool of Nemhain and tosses the coin into the black, still waters of the lake.  She revives Sir Lancelot who so valiantly sacrificed his life in “The Darkest Hour, part 2”.  Is it really the brave and honourable knight, or just a Shade, a mere shadow of his body and soul?  We will soon learn that he is the latter. 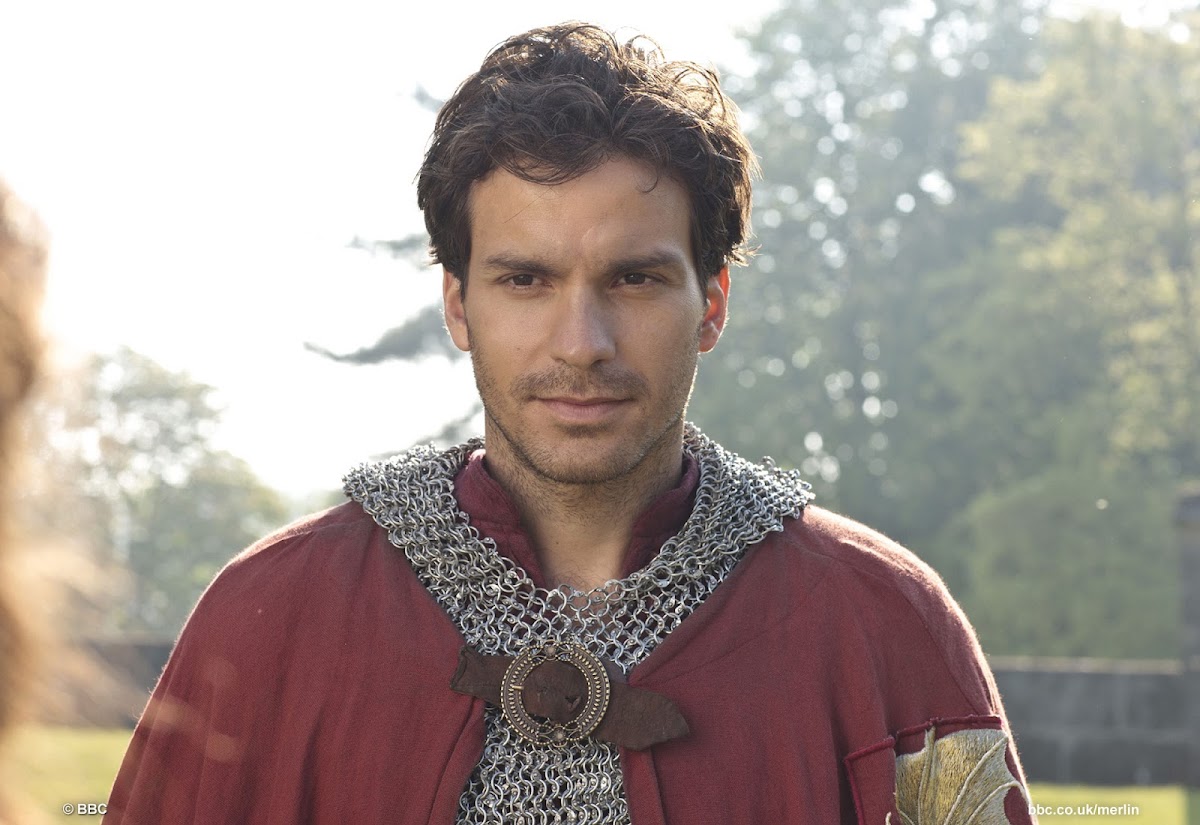 Meanwhile, back at the castle, Arthur surprises Gwen by playfully blindfolding her and leading her into her home which is alight with candles.  He kneels before her and we finally hear the words we have been waiting four years for:

Arthur: “Guinevere, will you do me the honour of becoming my wife?”

It is possibly my favourite Merlin scene of all time.  Gwen throws herself into Arthur’s arms, weeping tears of joy while an obviously confused Arthur has to ask whether that is a yes.  Of course it is! 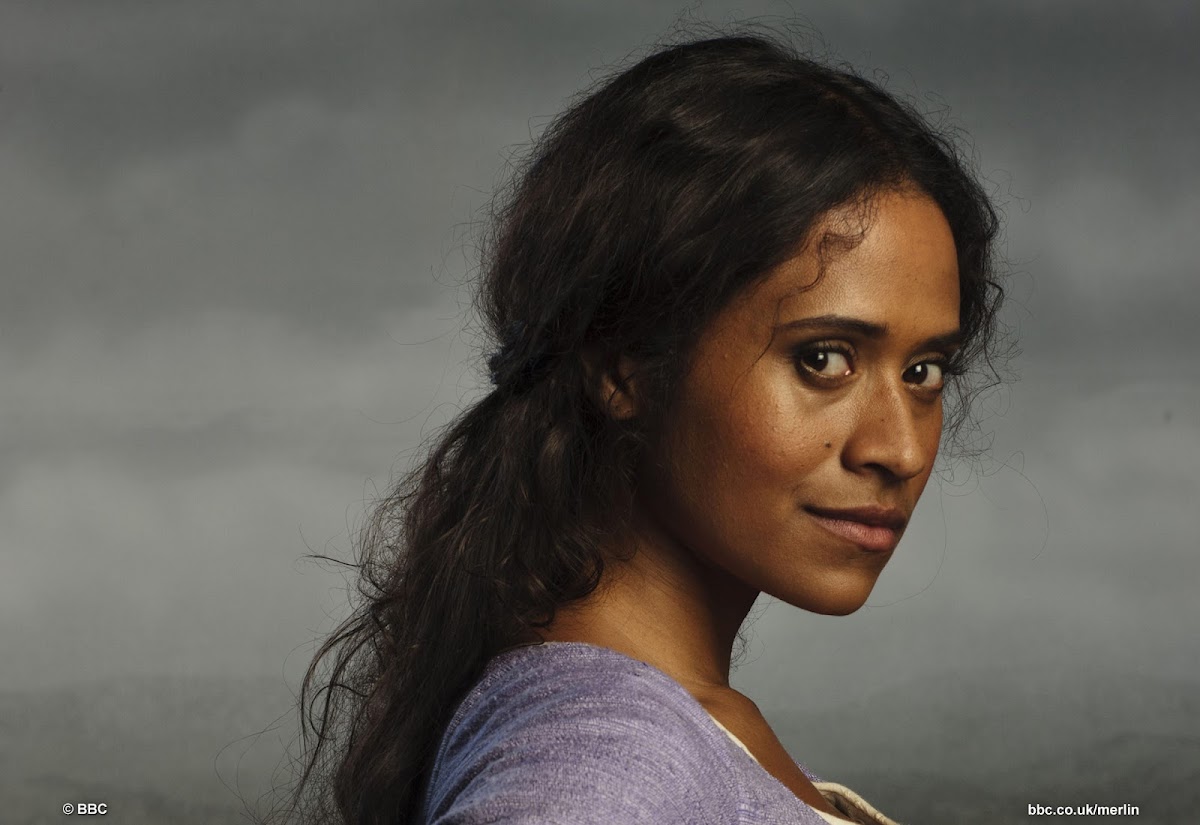 But trouble is on the way and it will always be on the way for as long as Morgana pursues her bitter, evil path.  For Morgana has brought back Lancelot not to harm King Arthur but to win back Gwen’s heart.  Sir Lancelot makes a dramatic re-entrance in Camelot during the celebratory jousting tournament marking the upcoming royal nuptials.

At first he is welcomed back to the fold with open arms; King Arthur and the knights of Camelot are thrilled to have him back and believe his tale of being rescued by the Mudhabi people.  Merlin is the first to realise that Lancelot is not all he says he is though.  Lancelot was once Merlin’s biggest ally, he knew of Merlin’s magic from the start and never betrayed his secret.  But Lancelot does not recognise nor remember Merlin’s abilities.

Merlin: “I've spent so long thinking about what happened, could I have saved you? And if there was anything I could have done, if I could have used magic...”

Sir Lancelot: “If any of us had any magic, Merlin, life would be a lot easier”.

Of course, Guinevere is far too graceful and noble to simply fall into Lancelot’s arms once she has pledged her love for Arthur.  She is certainly glad to see Lancelot return but she would never betray her true love.  But she is no match for Morgana who enchants a bracelet to reawaken Gwen’s feelings for Lancelot and compel her to fall in love with him.  This was never going to end well.

Warning: Spoilers ahead. Do not read if you have not watched the end of “Lancelot du Lac”

There is a lot to love about this episode, especially when Arthur finally proposes to Guinevere.  It was also great to finally see the return of Santiago Cabrera in his role as Sir Lancelot.

As uplifting as it was in parts, this was ultimately a tragic episode with some incredibly strong performances from Colin Morgan and Angel Coulby.  The scenes where they are dismantling the preparations for the wedding that never happened were really powerful, with Arthur heartbroken and Merlin imploring him to forgive Gwen.

I was on the verge of tears when a confused and blindsided Gwen declared her love for Arthur before he cast her out.

Guinevere: “You mean everything to me Arthur.  Once there was Lancelot, a long time ago but I haven't considered him in that way for many years.  I thought he was dead, I thought I would never see him again and... and then... when I did, I was overwhelmed.  I was drawn to him, I couldn't stop myself, I don't know why.  I love you, you mean everything to me.”

It is especially poignant when Merlin releases Lancelot from Morgana’s spell, thus freeing his soul and Lancelot awakes just long enough to truly recognise Merlin and thank him before his true death.

It is interesting to note that the cast and crew of Merlin considered “Lancelot du Lac” to be one of the finest episodes ever recorded but from a fan’s point of view, it is not that simple.  I found it heart breaking that Guinevere was prevented, once again, from becoming queen and that it was not that something simply came between her and Arthur.  No, once again, Arthur lost his faith in Gwen and was convinced of her guilt.

I hated that she was cast out of Camelot and that she left in rags.  I’ve mentioned before that I really don't like it when really crappy things happen to my favourite characters in my favourite shows.  It makes me think that if Gwen hadn’t been a mere servant (and a metaphor for all the classism and racism in English society), then Arthur would never have stooped so low as to cast her out in such a manner and the writers wouldn’t have felt so easy about writing it that way either.  Why did it have to be Gwen who paid the price?

But on the other hand, Guinevere really was complicit in Arthurian legend when she embarked on an affair with Lancelot du Lac but Merlin is a children’s programme and we were never really going to go there.  I just wish that Gwen’s character was not constantly under attack.

As much as I love BBC Merlin, I really wish we’d seen more of Sir Lancelot and Santiago Cabrera in the series.  In Arthurian legend, Lancelot was the most skilled, most popular of all the knights and his name is as well known as those of King Arthur and Merlin.  He also outlives both King Arthur and Guinevere in the legends.  So why did he have such a small part in this series and more importantly, why did the gorgeous Santiago Cabrera not grace our screens for far more time than he was allowed?

There is little we can do about Santiago Cabrera and Sir Lancelot du Lac, as I really do believe he has gone now, but I do hope to see Guinevere catch a break in the next couple of episodes.  She deserves so much more than to be cast out in rags. 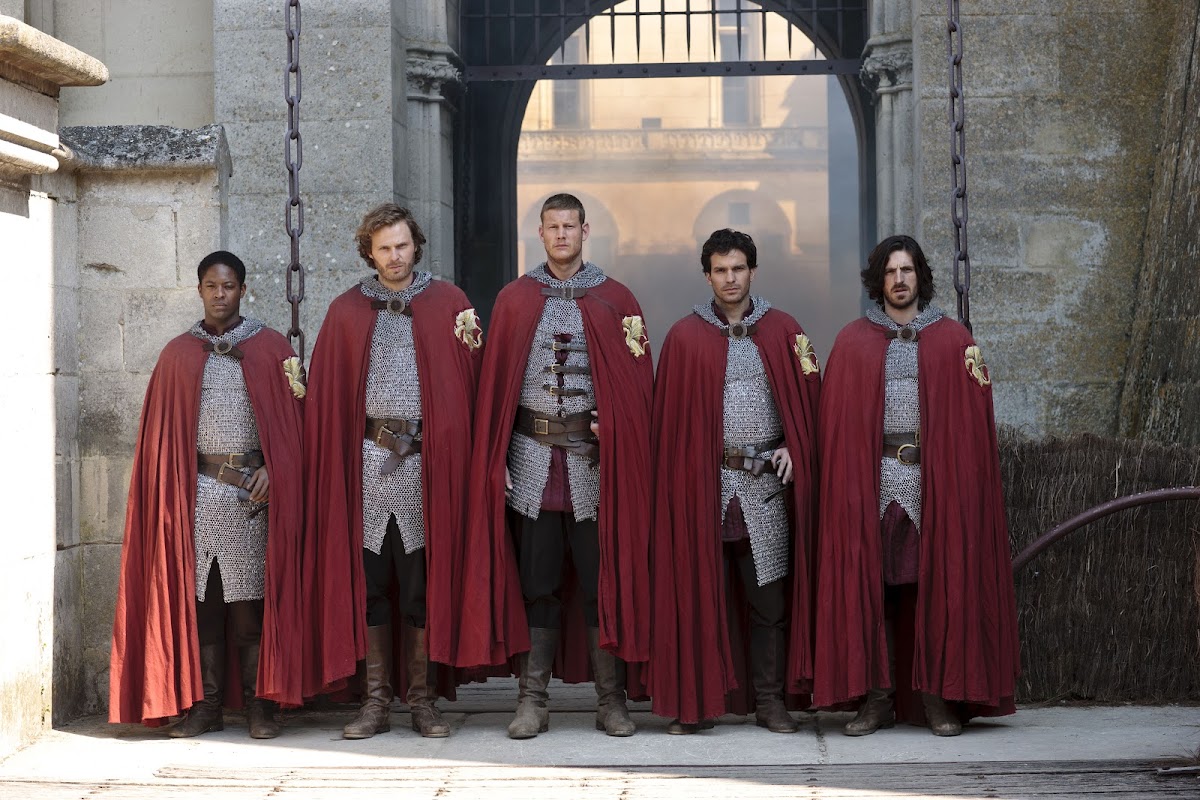 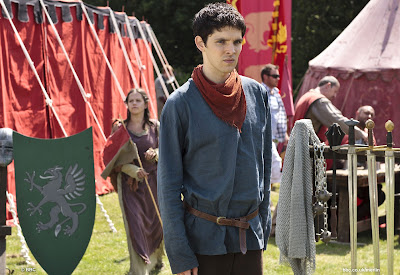 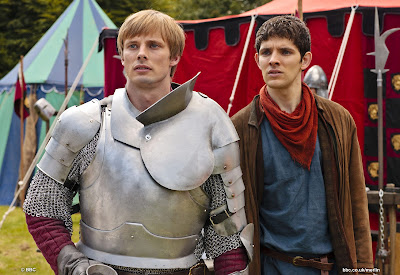 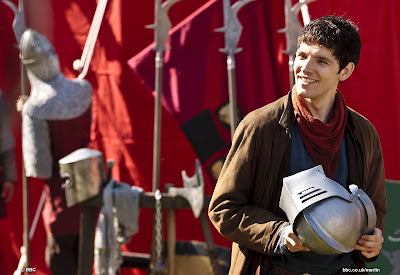 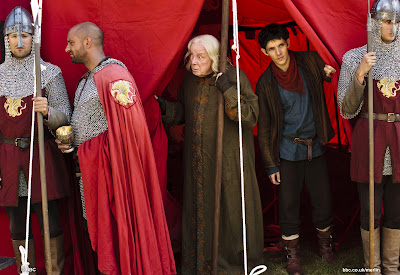