TV Review: Merlin – “A Herald of the New Age”

With just three more story arcs to go, we are hurtling towards the end of the fourth season of Merlin.  At first glance, "A Herald of the New Age" seems to be yet another filler episode, although this season of Merlin has been plagued with relatively few of those. The significance of this episode lies in its title and marks it as a significant turning point in Arthur's reign and the coming age. There are some incredible performances from Colin Morgan (no surprises there) and Bradley James as they encounter evidence of an unimaginable horror. There is a twist too and Arthur prepares to pay a terrible price.

While out on a patrol, King Arthur, Merlin and the knights of Camelot wander upon an old Druid shrine. Merlin immediately senses that the shrine is cursed and warns the knights against touching or disturbing any part of the shrine.

Arthur appears to be deeply moved, troubled even, and calls the knights away.

King Arthur: "There's nothing here for us. Move out".

Sir Elyan (Adetomiwa Edun) remains behind, takes a look around and drinks from a well.  As he does, he disturbs the spirit of the young boy (Nicholas Croucher) for whom the shrine was built.  The Druids often built shrines for restless or troubled spirits and this boy is particularly so. 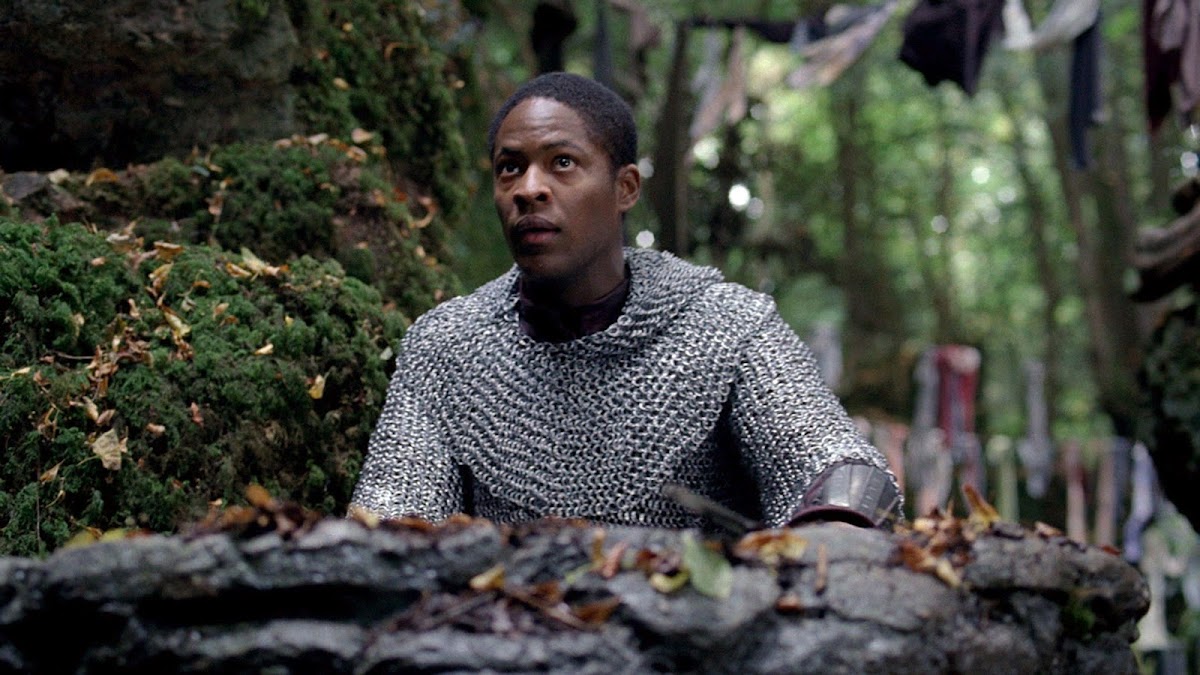 It doesn’t take long for the boy to begin haunting Sir Elyan as he appears to him in dreams and while waking.  He begins to influence Elyan and eventually makes his business known: he requires of Sir Elyan that he must avenge his death and the ruthless slaughter of all of his kin by the King of Camelot.

And so Sir Elyan embarks on a quest to kill Arthur and Agravaine (Nathaniel Parker) is only too quick to jump at the chance to sow more seeds of discontent and disrupt Arthur’s inner circle.  Will Gaius and Merlin get to the bottom of this curse before Elyan is put to death for treason?

Spoiler Warning: Do not read further if you have not watched “A Herald of the New Age”. 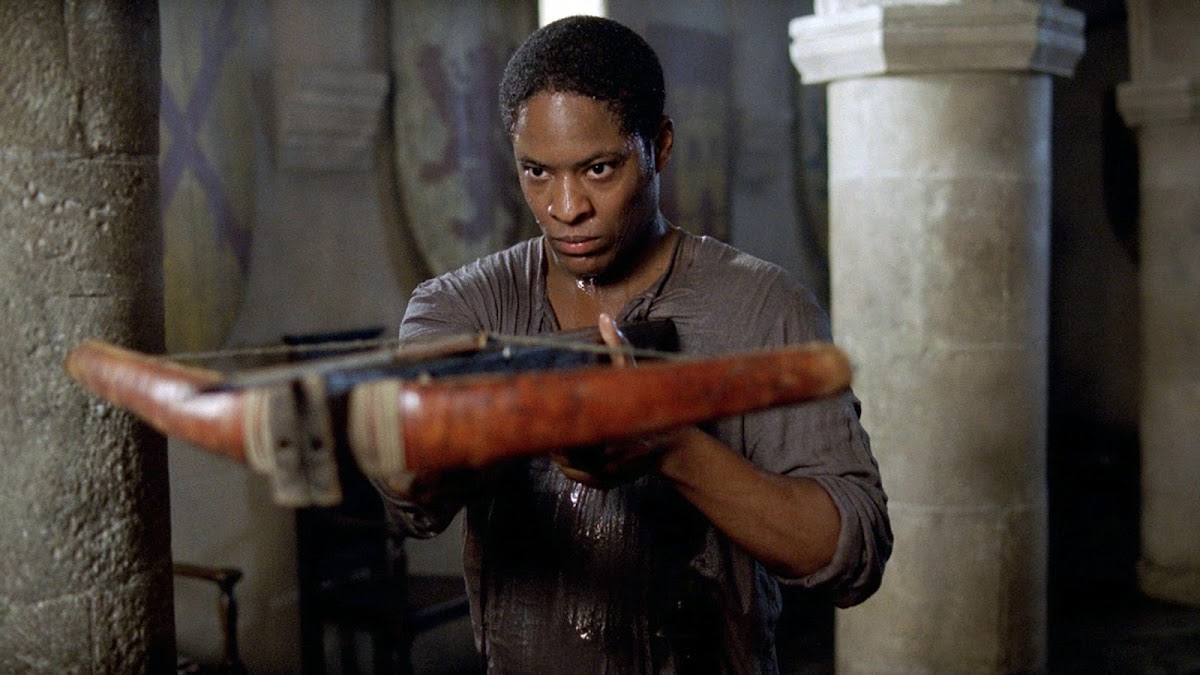 There were two aspects of this episode that I wasn’t too keen on.  The first is Agravaine.  He has to be one of the weakest, most poorly written villains in television history and I have long been bored of his pointless, relentless efforts to sabotage Arthur’s court just for the sake of it.

Of course, it could be a lot worse.  Not every magical threat or event this season has been introduced by Agravaine and Morgana.  A lot of the time it has just been rather lucky and coincidental and they have benefitted from circumstances like the parasites that they are.  I just wish that Agravaine wasn’t such a snivelling sycophant (both as he appears to Arthur and as he really is to Morgana).  Given what poor Nathaniel Parker has had to work with this season, he has done remarkably well but I honestly think they could have done just as well to leave out this role entirely.

My second gripe has to do with Guinevere.  Her departure is assumed to be the reason for both Sir Elyan’s strange turn and Arthur’s despondency but it is a little ambiguous and certainly isn’t the reason behind Sir Elyan’s actions.  Does this mean that life just carried on without her? That Arthur and Elyan weren’t devastated?  Because that really isn’t cool.  I’ll give Arthur the benefit of the doubt and assume that this really was about Gwen and not his guilt: 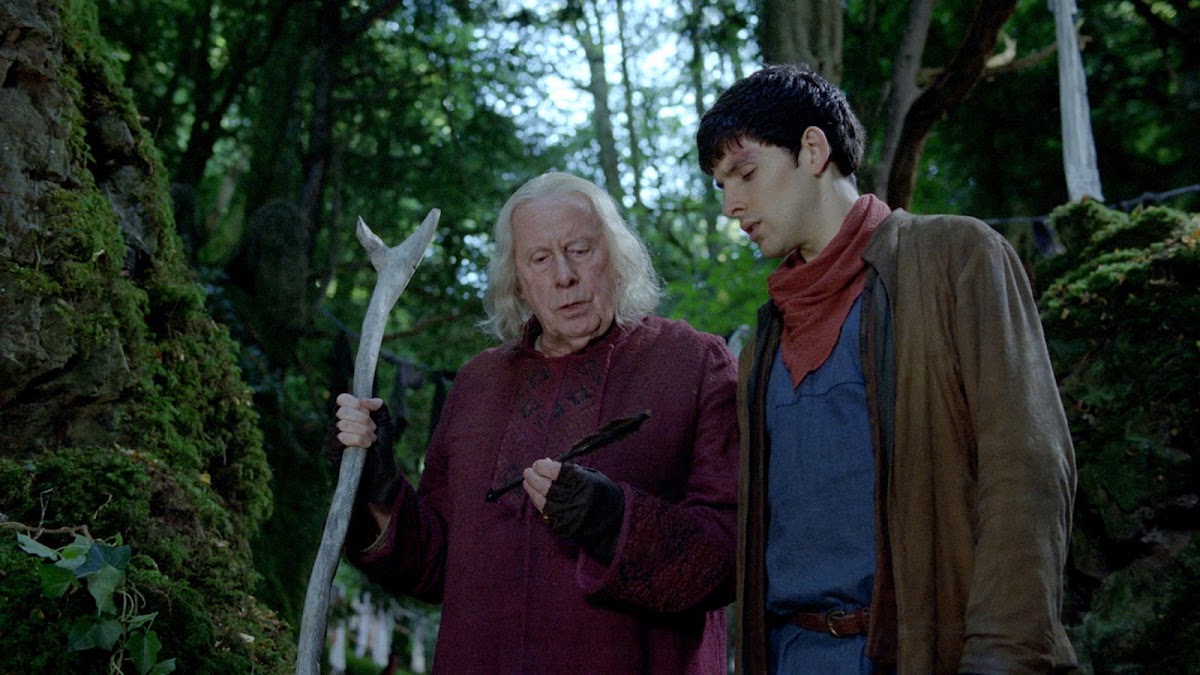 But oh, how the rest of the episode makes up for those two points!  How easy was it to think that Arthur was innocent in all of this?  That the Young Druid Boy wanted to make him pay for something his father had done?  How surprising was it to hear that Arthur himself had been behind the attack on the Druids?

Arthur: “I am responsible for what happened to you and for all the violence that happened here.  When I led the attack on your camp, I was young and inexperienced. I was desperate to prove myself to my men, to my father”.

With that confession, Arthur does more than face up to his past crimes, weaknesses and his desire to please his father.  I believe it is a turning point, the herald of the new age.  The point at which he must realise that in all the times he has suffered because of magic, he must surely have been the aggressor in the majority of them.

And in that moment, he promises to treat the Druid people with respect from that moment on.

Arthur: “I can still hear the screams, I cannot right this wrong. Nothing I can ever do will change the horrors that happened that day, but I can promise that, now that I am king, I will do everything that I can to prevent anything like this ever happening again. From this day forth, the Druid people will be treated with the respect they deserve, I give you my word.  I am truly sorry for what happened to you”.

Bradley James was incredible in this episode.  His acting was superb and my heart almost stopped during this scene.  King Arthur truly thought he was going to die, that he was making the ultimate sacrifice and James portrayed that to perfection.

There was the moment too, when Merlin enters the shrine and peers into the well, witnessing all that transpired during the massacre and tears come flowing down his cheeks.  That was an exceptional scene and I have to say that I cannot wait to see what these two actors have in store for us next season.