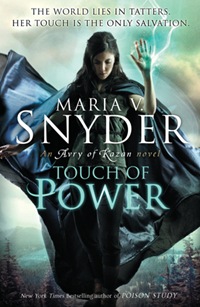 In the land of the Fifteen Realms, healers are not afforded the respect that you would imagine. Instead, they are feared and reviled, blamed for the devastating plague that swept through the realms, leaving devastation in its wake. When 20-year-old Avry of Kazan uses her magic to heal a dying child, she knows that she faces certain death if caught but she places a higher premium on the young and innocent life that she is saving.

It is no surprise then that in these desperate times the child's parents turn Avry in and she is scheduled to die at dawn. In a dramatic sequence, Avry is rescued from her prison cell by the powerful yet mysterious Kerrick who wishes to use Avry's healing powers to save the dying prince Ryne. Not only is Ryne the man believed to have unleashed the plague unto the realms in the first place, saving him will undoubtedly kill Avry, placing her in an almost impossible situation.

Touch of Power is the intriguing new fantasy novel by prolific young adult author Maria V. Snyder.  It is the first book in a trilogy and as you can see from the interview below, Maria is already working on a sequel.  It is a high fantasy novel set in a medieval-type world but it is will appeal to fans of urban or low fantasy too.

I enjoyed every minute of this novel and could not put it down.  Much of Touch of Power takes place in small forests and villages as Avry, Kerrick and his men make their way to through the Fifteen Realms, across the Nine Mountains to where Ryne is located.  In their quest, they must avoid carnivorous plants, man-eating beasts, blood-thirst mercenaries and undead warriors. 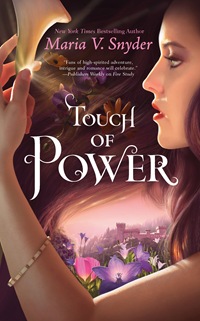 All the while, Avry locates her long-lost sister and it isn’t the tearful reunion you’d expect.  She learns more about her healing power and about the people that trained and worked with her.  Mostly, she must learn to trust these men, this band of fighters who will kill her if she does not help them.

It is a long time since I have been completely immersed in a fantasy novel, to the extent that I lived and breathed a world, but that is certainly true of Touch of Power.  In fact, the last time I was so impressed by a book in this genre was when I read Maria V. Snyder’s Poison Study.  In many ways, this novel is similar to Poison Study in that it has a strong, magical protagonist and is set in lands torn apart by war, strife or political wrangling.  There is enough here though to set Touch of Power apart from Maria’s former books and in fact, I’d recommend all of them.

I especially enjoyed the concept of healing in this story and the various source of magic.  I loved Kerrick’s abilities but won’t reveal too much for fear of spoilers.  The Death and Peace Lilies (the aforementioned carnivorous plants) were an incredibly interesting idea, as was their part in the story.  I liked both the protagonists Avry and Kerrick, which makes a change from others novels I’ve read recently where I simply wished one of them would perish.

I would recommend this book to all lovers of fantasy romance or young adult fiction, including fans of the Harry Potter series, the Vampire Academy series, The Old Kingdom Series or The Twilight Saga.

I give Touch of Power five out of five stars.

Touch of Power is a Mira Ink book.

I’d like to thank Maria V. Snyder for taking the time to answer six of my questions.  Her answers were really brilliant.  At the bottom of the post, you can see an animated book trailer.

Touch of Power is a great title and I thought it was very subtle within the context of the book.  Are you able to tell us the titles of the next two books in the series and what they will be about?

I can't take any credit for the titles.  We, as in me, my editor, my agent and a number of others at the publisher came up with dozens of titles that were all rejected for one reason or another.  Touch of Power was suggested by my editor (a hybrid of a couple others) and she added Scent of Magic and Taste of Death as the next two books to seal the deal.  After two months of emailing, we all agreed that it was a perfect trio of titles.

I'm working on Scent of Magic now and it's focusing on the war between Estrid and Tohon, while Avry seeks to reconnect with her sister.  I've no idea what Taste of Death will be about until I finish SOM. I'm not a planner, but a seat of the pants writer, discovering as I go.

What was your favourite chapter in Touch of Power to write?  And your least favourite or most difficult?

The most challenging aspect to write was the rumors about the plague.  I needed there to be a misunderstanding between Kerrick and Avry about the plague, and it was hard to keep it going and make it logical at the same time.  I'm a stickler for logic!

One of my favourites aspects about your books is that you touch on serious issues in your books including war, massacres, sexual assault, slavery and political upheaval within the context of your stories.  Are there any topics that you haven't covered yet that you would like to cover in future books?  What story would you like to tell?

I don't focus on issues when I'm writing.  I focus on the characters, their situation, and their motives and desires.  Those issues/topics develop as I write the story so I never plan on them.  After the healer series, I don't know what I'll write next :)

Following on from the previous question, what inspires you to write about those topics?  Do you conduct a lot of research beforehand?

I think these topics bubble up from my unconscious.  I'm concerned about the environment and about over-population and wars so these will always creep into my writing.  I don't think anyone in this world should go hungry and so Yelena helps Fisk, a beggar boy and Avry gives all her money to a street rat.  I don't conduct any research prior to writing.  Since I discover the story as I write, I'll mark places where I need to do some research and then continue with the story.  Once I'm done, I'll do the research and then fill in the blanks when I revise (or correct errors).

It depends on the character.  Some decide they're not going to follow any of my preconceived notions and do their own thing, while others are happy to play along.  And some are down right difficult.  Devlen in the Glass books would not cooperate at all.  He caused me the most trouble and I had a terrible bout of writer's block because of him!

Out of all of your books, who is your favourite character and why?  And your least favourite?

Janco from my Study and Glass books – no doubt!  He’s just a fun, quirky character that goes off on unusual tangents and I love writing about him.

Finn and Walsh from the Glass books are my least favourite characters.  They do despicable things and are very controlling and manipulative.