Book Review: My Soul to Keep by Rachel Vincent 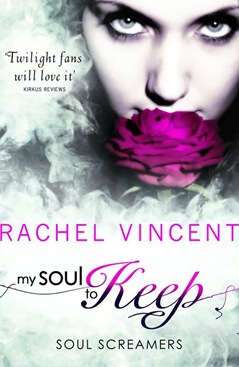 Kaylee Cavanaugh has had the strangest time lately. In just ten short weeks she discovered she was a bean sidhe, learned that her aunt was trading the souls of innocent girls on the black market  in exchange for eternal youth, brought her best friend Emma back from the dead and reclaimed the soul of a young starlet from the hellion who had bought it. She did all of this with the help of her bean sidhe boyfriend Nash Hudson and his dead reaper brother Tod.

A month after she was grounded following the events in My Soul To Save, Kaylee is hoping to resume a normal teenage life. She might just have to wait a little bit longer for that because someone is getting teenagers hooked on Demon's Breath, the most addictive substance in the Netherworld. Demon’s Breath is exactly what it says on the tin, the breath of demons and it is craved by creatures of the Netherworld.  As Nash’s friends succumb to addiction, madness and death, Kaylee realises that it can have catastrophic and fatal consequences to human users.

With their unique abilities to cross into the Netherworld, Kaylee, Nash and Tod will have to track down those responsible for supplying Demon's Breath to our world and stop them before this deadly substance spreads through their school.  But could it be that the surge of Demon’s Breath is merely a diversion from a far greater and far more evil plan?

My Soul to Keep is the third novel in Rachel Vincent's Soul Screamers series.  In the previous two books, Kaylee and Nash met, fell in love and realised the lengths they would go to prove their love for each other.  Without giving away the plot, My Soul to Keep is a whole different matter as Nash fundamentally betrays Kaylee and her character is tested to the limit as she must overcome her shock and pain to push forward nevertheless and save the lives of Nash and her father.

As with all the books in the series, the best character in the book is Tod and I cannot wait to see if he will get a bigger role in future books.  Rachel Vincent has a terrific style of writing, and is able to convey humour, sarcasm and descriptions effortlessly, without weighing down the flow of the story.  Tod has the best line in the whole book which might make slightly more sense if you know the context.

“But without proxies to boost his energy level, Avari won’t have the power to possess his own wardrobe, much less the entire cast of the Kaylee Cavanaugh show.”

Avari is the demon behind most of the mayhem in all three books to date and the source of increasingly diabolical plots to gain control of Kaylee’s soul.

I’d recommend My Soul to Keep to all fans of young adult, supernatural fiction and fans of Stephenie Meyer’s Twilight series and Richelle Mead’s Vampire Academy will love the banshees and demons in this series.

I give My Soul to Keep four out of five stars.

Buy My Soul to Keep on Amazon.co.uk

Article first published as Book Review: My Soul to Keep by Rachel Vincent on Blogcritics.

I actually purchased this book myself, so no need for a disclaimer this time!  This review contains affiliate links.