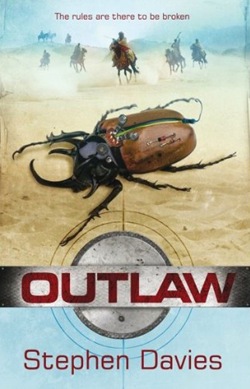 When Jake Knight sneaks out of the exclusive Waltham College, embarking on a high-tech, GPS version of Hunt the Thimble, he has no idea how much trouble he will land up in.  Jake follows the clues to Leeds Prison and uses his impressive wall running skills to coast over a wall three times his height.  Too bad it has a massive overhang on the other side.  Naturally, Jake is caught and is lucky not to be expelled from Waltham College.  He is suspended for the rest of the school term and and sent home to join his family in Burkina Faso.

Jake has barely been in Burkina Faso for 24 hours when he is kidnapped along with his sister Kas.  It seems that the children of the British ambassador are perfect targets for a terrorist organisation with an agenda of extortion and coercion.  Jake might just get the adventure he has been seeking, but at what cost?

Outlaw tells the story of the kidnap of Jake and Kas Knight and it is set primarily in the deserts and plains between Ouagadougou and Djibo in Burkina Faso, West Africa.  It is also the story of Yakuuba Sor, the vigilante, Robin Hood-type character who is framed for the kidnap and labelled as a terrorist but who fights against injustice, poverty and corruption on a daily basis.

Outlaw is a non-stop action adventure that features heart-stopping chases across the desert in vans, on horseback and on a crowded cross-country bus.  This is an exotic, colourful desert tale featuring a levitating sheikh, a Tuareg princess and the Ouagadougou cattle drive.

I thoroughly enjoyed the chase through the desert and the descriptions of the people, desert camps, culture and customs of Burkina Faso.  I loved the character of Yakuuba Sor and loved his vision and determination to rid his world of corruption.  The only part of the book that I found slightly distracting was the matter of mobile phone signals and battery life, as I found this to be a slight stretch.  Still, I appreciated that the author explained many of the tricks and technology in his afterword, including the iPod, AA battery and cream recharging trick.

While the focus is obviously on the events that take place in the book, author Stephen Davies is careful to draw attention to the real life poverty, human suffering and corruption in the region.  As he weaves his story, he tells of officials who enrich themselves rather than govern, charlatans who prey on the fears and suspicions of locals and demand what little wealth they have, merchants involved in price-fixing, and military personnel who target civilians and extract exorbitant and arbitrary fines.  Exciting, entertaining and educational, Outlaw is perfect for both girls and boys over the age of 11.

Stephen Davies lives in West Africa and resides amongst Fulani herders.  This is the third West African set novel that he has written for the teenage market.  His other two novels are The Yellowcake Conspiracy and Hacking Timbuktu.

Outlaw is yet another gem of a book from Andersen Press, the publishing imprint of Random House that features quality books for children and young adults.

I would certainly recommend Outlaw for children aged 11 and over and give the book 4 out of 5 stars.

A copy of this book was provided to me for the purposes of this review and all opinions contain herein are my own. This review contains affiliate links.
SHARE:
Posted by Mandy Southgate at 7:33 pm