Book review: The Island of Thieves by Josh Lacey 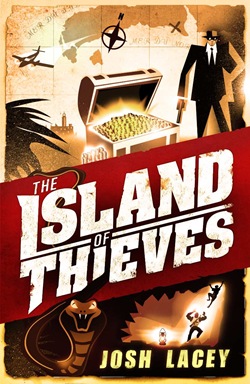 The Island of Thieves is a stunning treasure story complete with a mysterious manuscript and hidden chests of gold and silver. While firmly rooted in the perils and dangers of modern day life in Peru, the real magic of the story lies in the tales of plundering pirates, majestic galleons and legendary sea voyages contained in the manuscript.

When Tom Trelawney plays with matches and burns down the garden shed, his best friend's mum says that he can no longer go and stay with them for the summer holidays. This poses a bit of a problem for Tom's parents as they are about to embark on their first overseas holiday in several years. With no other options available, Sarah and Simon Trelawney reluctantly drop Tom off with his Uncle Harvey in London.

Harvey is not exactly known for his mature or responsible demeanour and he soon lives up to that reputation when he announces his intention to abandon Tom in his London flat while he flies out to Peru in search of a lost manuscript. Desperate for some mystery and excitement in his life, Tom manages to convince Harvey to let him join him on his trip to Peru and the pair embark on a dangerous and perilous adventure.

As soon as Harvey and Tom arrive in Peru, they find themselves in trouble with the powerful and ruthless local crime boss, Otto Gonzalez, who Harvey had the bad judgement to defraud on his previous trip to Peru.   What ensues is a desperate and dangerous game of cat and mouse as the Trelawneys race to find the manuscript, locate the hidden treasure and escape Gonzalez’s murderous pursuit.

The Island of Thieves is fast-paced, exciting and very realistic .  Perhaps the best part of the story is that Harvey's enemies were not stereotyped caricatures of hoodlums but authentic, terrifying and believable criminals with modern links to corruption, murder and extortion.

Another great aspect of the book is that it was based on the real events of Francis Drake and his voyage on the Golden Hinde. It was amazing to learn about the history of the voyage, the experiences aboard the ship and the encounters along the shores of South America and it certainly didn't feel like a history lesson!

My only complaint about the book is that we didn't seem to gain insight into Tom's mind. We certainly came to know Tom through his decisions and actions and came to respect his maturity and strong sense of both morality and ethics, but we learned little else of his personality and motivations. Nevertheless, his steadfast and brave actions contrast strongly with those of both his uncle and the gangsters and that is what makes this such a great book for the pre- and early teen market.

I had the opportunity to chat briefly to author Josh Lacey about The Island of Thieves and he is exploring the idea of writing more books about Tom Trelawney.  I would personally love to see more books in this series and would love to see the unique combination of history, adventure, exotic locations and Tom’s strength of character that made this book so enjoyable.

The Island of Thieves is highly recommended and I give it 4.5 stars out of 5.

Buy The Island of Thieves by Josh Lacey at Amazon.co.uk

Article first published as Book Review: The Island of Thieves by Josh Lacey on Blogcritics.