Garden State rockers Stuyvesant have a distinctively SoCal sound and, indeed, the name of their latest album, Fret Sounds, is a play on the title of the seminal Beach Boys album, Pet Sounds.  Stuyvesant’s music is made to be played loud, and is perfect for beach parties and barbeques on long, hot summer nights.

As easy as it is to draw comparisons with Green Day or My Chemical Romance, Stuyvesant are keen to stress that they are not your average college rock band.  This is understandable when the band features some of the biggest names from the Hoboken scene of the early 90s: Sean Adams (Friends, Romans, Countrymen) and Ralph Malanga (Footstone) on vocals and guitar, Pete Martinez (The Coffin Daggers) on drums and Brian Musikoff (Friends, Romans, Countrymen) on bass. 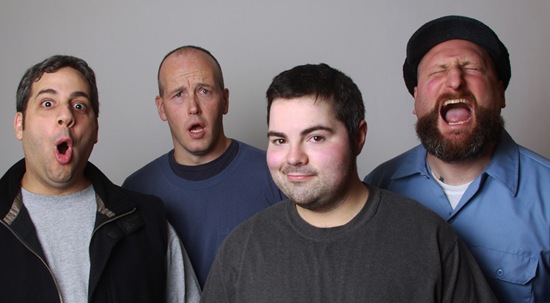 Fret Sounds (release June 14th on Dromedary Records) is a collection of ten energetic and catchy songs.  Sean and Ralph play tag through many of the tracks, playing their guitars at lightning-fast speeds, and this is framed with Brian’s funky, upbeat bass lines and Pete’s manic drums.  It is pretty hard to listen to Stuyvesant and not find your head bouncing and feet tapping after a while.

“Duly Noted” is the first video from Fret Sounds.  Bassist Brian Musikoff (a talented cartoonist) directed the video and provided the funny faces.  The video also features cartoon amps by Pat Moriarty, animation by John Kuramoto, and editing and compositing by Beel Hamilton.  It is great to see a band putting such humour and creativity into a music video for a change!

To promote the release of Fret Sounds, Stuyvesant are offered a free download of "Duly Noted”:

Catch up with Stuyvesant on Twitter, Facebook or the Stuyvesant website and for a limited time, the full CD of Fret Sounds is available as an AOL Listening Party.

You can buy Fret Sounds at Amazon.co.uk