Book Review: Outside In by Maria V Snyder 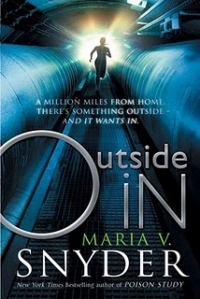 Outside In is the sequel to Maria V. Snyder's dystopian, young adult novel Inside Out.  In Inside Out, it was established that the Insiders were living in a giant structure that was hurtling through space and that Outside did not represent blue skies and green fields but rather Outer Space. Using live sheep and vegetables grown through hydroponics to feed the population, the systems of Inside were self-sustaining and everything was recycled to further perpetuate the system.

Inside was divided into two main population groups: the uppers who controlled the systems and the lowers who performed the manual labour. The Travas family and the Population Control Police controlled the population of Inside with brutal and often lethal means and the seeds of discontent amongst the uppers and lowers were sown.

Inside Out reached its climax with the uprising and rebellion lead by a scrub named Trella and Outside In begins after those events. The Travas family are all locked up and Trella hopes to return to a quiet life while the newly formed Committee runs the affairs of Inside.

Trella's quiet life does not last long, however, as a series of attacks rock Inside (literally), thus putting Inside’s support systems into grave jeopardy.  Added to that, affairs between Trella and her boyfriend, Riley, are strained as he struggles to understand why she won't stand up and be a decent leader to her followers.

I had read Inside Out in February this year and gave it a 5-star review on Blogcritics as I’d found it innovative, imaginative and exciting.  It is reasonable to say, therefore, that I started reading Outside In with pretty high intentions.  Unfortunately, the book simply didn’t match up to those expectations.  Perhaps it was intentional and mirrored Trella's desire not to get involved, but the first half of Outside In truly dragged. It felt mechanical and stilted, as if the events in the book were being reported, rather than a story told.

This resulted in a lack of depth in the novel.  Snyder has received criticism from readers in the past for constantly rehashing the events in her previous novels (this was especially true of Fire Study, the last in the Study series). With Outside In however, I felt that Snyder did not do enough to recap readers on the structure and systems of Inside and the various characters.  Characters are constantly introduced to the story and Snyder makes constant reference to the unique structure of time in Inside but it all seemed rather confusing and distracting given her lack of detail and depth.

Both books fall into the romantic fiction corner of the young adult market and perhaps most telling was that I did not relate to any of the men in the book, especially Riley who is meant to be Trella's love interest. There was simply no chemistry between Riley and Trella and in fact, I spent most of the book convinced that she was going to land up with another character Logan to whom she showed far more interest, respect and attention.

As a whole, Outside In felt extremely rushed as if Snyder realised she had dragged to the middle of the book and then needed to conclude the book in a certain time frame or page count. 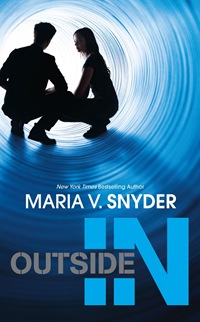 Gone was the expert storytelling and weaving in of clues to be found in Inside Out or Poison Study from Snyder's Study Series. Instead, the reader was simply told of the constant betrayals and mutating loyalties of the characters in the book. Ultimately, the reader was left not knowing who to believe or, indeed, what the truth actually was. This was certainly complicated by the shallow characterisation in the book.  It was impossible to gleam the characters' true motives or intentions as no real depth or purpose was written into their actions.

As the book rushes towards its end, the great battle, resolution and conclusion take about fifteen pages and it seems like few of the great questions are really answered.  It is frustrating to say the least and it is hard to ascertain whether Snyder is setting the reader up for another book in the series or whether the answers were altogether too vague and insubstantial to leave an impression.

As impressive as it is that Snyder has managed to produce eight novels in six years, it is important that Snyder focus on quality as opposed to quantity.  Poison Study and Inside Out were fantastic novels introducing rich and wonderful worlds full of detail, imagination and innovation.  Perhaps this level of disappointment would not be possible with a less talented author but Maria V. Snyder is talented and I hope that she slows down somewhat and focuses again on weaving exciting and complex stories.

Outside In is not a stand alone novel and it would be hard to follow the events if the reader had not read Inside Out first.  However, the reader could certainly get away with enjoying the first novel and leaving out the sequel altogether.  I give Outside In two out of five stars and would possibly hesitate before reading a third novel in this series.

You can purchase Outside In by Maria V. Snyder at Amazon.co.uk

I'd recommend that you first purchase Inside Out at Amazon.co.uk

Article first published as Book Review: Outside In by Maria V Snyder on Blogcritics. This review contains affiliate links