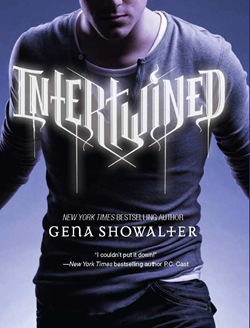 Sixteen-year-old Aden Stone is the boy nobody wanted. He has been diagnosed as a schizophrenic because he talks to himself and has been passed around between institutions and half-way houses his whole life.  The truth is he is not crazy.  Aden has four souls trapped inside of him and they keep up a constant stream of chatter in his head, passing commentary on every last aspect of his life.

When Aden arrives in Crossroads, Oklahoma, he knows that he has one last chance to prove himself or he'll land up back on a secure ward.  He has to comply with the strict rules at D & M Ranch, a halfway house for "wayward" teens and he has to avoid trouble.  Of course, that is easier said than done when one of the undead souls in his head can raise the dead, another predicts the death of others, and the other two can transport Aden through time or into another person's body.

Having spent his whole life alone and without friends to call his own, Aden is thrilled to meet Mary Ann, a shy, bookish girl who calms the voices in his head and accepts Aden for who he is.  Aden’s abilities have not gone unnoticed though and he soon finds that he is a magnet for supernatural beings, drawing them to him from around the globe.  One of these beings is the stunning vampire princess Victoria, who is literally the girl of his dreams, but chaos ensues when it becomes clear that not all of those beings have Aden’s best interests at heart.

Intertwined (Mira Ink) is written by prolific paranormal romance writer and New York Times bestselling author Gena Showalter. It is the first book in an exciting young adult series that introduces us to a complex and darkly intriguing world of vampires, demons, shapeshifters, and undead souls.

The opening sequence of the book was thrilling, involving the rising dead in the graveyard, but I have to admit to being relieved that the level of gruesome horror did not continue throughout the book. The description of Aden dismembering saponified corpses did not aid digestion.  From the moment Aden encountered Mary Ann and the world seemed to stand still, I was captivated.

I loved this book and have not been consumed by a book in this manner in years. I literally could not put it down until I finished it and still had the book in one hand as I rushed to order the sequel, Unravelled, online.  I am pleased to report that it arrived this morning as I simply could not have waited to much longer.

The book is written from both Aden and Mary Ann's perspectives and follows their respective experiences, betrayals and romances.  I adored Aden and absolutely connected with his character.  I appreciated his self-deprecating humour and enjoyed the never-ending chatter in his head.  I liked  Mary-Ann's side of the story too; usually, I do not like it when books switch from one viewpoint to another but it really worked in Intertwined.

Once again, I didn’t think it would work, but I somehow enjoyed the various supernatural beings appearing in one story together.  It seemed to add a level of depth to Showalter’s world to include witches, ghosts and other supernatural phenomenon, rather than focusing on one narrow species.  In this sense, her world is similar to that of The Vampire Diaries and True Blood, which I greatly appreciated.

Aden is my favourite bad guy in the book but I enjoyed the demons too as I have always enjoyed demon mythology.  I’d certainly like to see more of them in the next books in the series.  I also liked the shapeshifter Riley and could certainly see why Mary Ann was so attracted to him.

It seems inevitable that comparisons could be drawn between Intertwined and Stephenie Meyer's Twilight Saga.  Indeed, Twilight was the last book that consumed me as much as Intertwined did and that I found impossible to put down.  And yes, it is certainly relevant to point out that this is yet another young adult, paranormal romance novel.  Nevertheless, as an avid fan of the genre, I can say that I enjoyed this book more than any I have read recently.  I would absolutely recommend Intertwined and I am glad that I do not have to wait to read the next instalment.

I give Intertwined an easy five out of five stars.