Book Review: My Soul to Save by Rachel Vincent 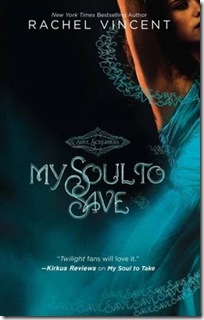 The young-adult romance genre has exploded in recent years and the attraction of the supernatural has been unmistakeable.  Some of the most popular books in the genre have been the Twilight series by Stephenie Meyer, PC and Kristin Cast’s House of Night series and Richelle Mead’s Vampire Academy series and this has been augmented by The Vampire Diaries on television and The Twilight Saga in film.  The market has been saturated with tales of vampires and werewolves and therefore, it is always refreshing when an author comes up with an equally alluring and captivating supernatural, young-adult, romance series such as Soul Screamers by Rachel Vincent.

My Soul to Save  is the second book in the Soul Screamers series.  In the first book, Kaylee Cavanaugh discovered that she was a bean sidhe (or banshee as we would pronounce it).  She had long been troubled by the creepy ability to predict people’s deaths and that knowledge caused her to scream bloody murder.  Of course, in My Soul to Take, we discovered that this was literal as young girls in Kaylee’s school and community were being murdered and as she alone could predict their deaths, Kaylee knew that it was up to her to stop it.   Luckily for Kaylee, she had caught the attentions of one of the most popular and attractive boys in school, Nash Hudson and he was the perfect person to tell her more about her destiny and abilities.

My Soul to Save begins with Kaylee and Nash at a concert of the extremely popular, teenage music sensation Eden.  All of a sudden, Eden drops dead on stage and Kaylee expects the usual compulsion to scream bloody murder.  When it doesn’t come, Kaylee and Nash realise with a dawning sense of horror that it is because Eden did not have a soul.  Kaylee soon discovers that Eden is not the only starry-eyed, ambitious teenager who has traded her soul for a chance of fame, fortune and success and she learns just what it means when a human being dies without possession of their soul.  Knowing that she can do nothing for the poor souls murdered in the first book, she becomes determined to do something for these lost souls.

I thoroughly enjoyed the first book in the series, My Soul to Take, and I gave it top marks for originality.  I really enjoy Rachel Vincent’s style of writing as she basically multi-tasks and for example, will describe characters making food while they are having a conversation.  She has an easy style which has the effect of putting the reader right there in the conversation with the characters.  Still, I wouldn’t have been satisfied if My Soul to Save had been more of the same story and I am glad to say that it wasn’t.  My Soul to Take is a complete departure and delves much deeper into the bean sidhe mythology; the abilities of bean sidhes and what they can and can’t do; the role of the reapers; and the exact nature of the Netherworld that the bean sidhes can see into when the women summon their scream. 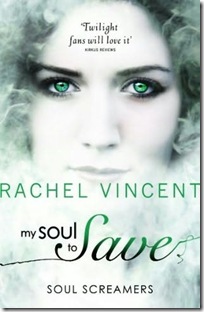 Nash and his dead reaper brother Tod are back to play a major role in the book but there is also a host of new characters such as pop princess Addison, her sister Regan and the ancient and powerful reaper Libby from Special Projects.  My favourite character was the very old and very powerful reaper Levi, Tod’s boss.  He was awesome in the same way as the Volturi Jane in Stephenie Meyer’s Twilight series in that he was a child when he died but he now wields incredible power and is very, very dangerous.

My Soul to Save is quite an adventure, taking place over just five days (including the Weirdest Wednesday Ever).  It was admittedly a bit slow in the beginning and it is hard to identify with a greedy and selfish pop princess who has sold her soul in order to get fame and fortune but it certainly picked up in the middle with Levi’s devastating entrance.  Whatever doubts I did have in the beginning were erased by the thrilling climax of the book and I rate this book 4 out of 5 stars.

My Soul to Save is available on Harlequin UK’s Mira Ink imprint and the UK edition features yet another stunning cover design by Blacksheep.

Buy My Soul to Save at Amazon.co.uk

Buy My Soul to Take at Amazon.co.uk

Article first published as Book Review: My Soul to Save by Rachel Vincent on Blogcritics.