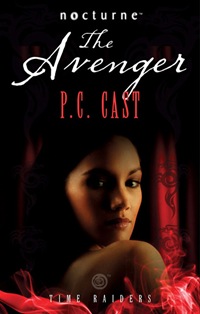 PC Cast is best known for the phenomenally successful young adult House of Night series that she co-writes with her daughter Kristin Cast.  The series is about a vampire finishing school and it has it all: vampires, magic, danger and excitement all against a backdrop of Cherokee and ancient Celtic mythology.  Before breaking into the world of young adult fiction, Cast was an accomplished fantasy romance writer and she has authored several successful series including the Goddess Summoning and Divine series.

PC Cast’s latest work sees her writing for the Mills & Boon ‘Nocturne’ imprint for the first time.  Nocturne is a sexy imprint full of adventure, mystery, crime and romance and is released by Silhouette publishers in North America.  PC Cast’s The Avenger is the third of four books in the Time Raiders series which is about military women going back in time to specific points in history to recover parts of a sacred medallion.  Each book in the series has been written by a different author and Lindsay McKenna, Cindy Dees and Merline Lovelace have written the other books in the series.

I would never have thought that a Mills & Boon novel combining historical fiction with time travel, magic and the supernatural could ever work but it does and I enjoyed every single page of this book.

The heroine of The Avenger is Alexandra Patton, a military secret agent who, much to her dismay, can see and communicate with the dead.  Despite her promises to never return to the military, Alex visits the top-secret Project Anasazi and somehow gets roped into travelling to 60 AD to ancient Britain.  It is the time of Queen Boudica and the Roman Empire, a time of great brutality and upheaval and also a time when there was still magic all around Britain.  Alex disguises herself as High Priestess Blonwen and adviser to Queen Boudica and she befriends druid Caradoc.  Without changing the course of history, Alex must somehow find the Queen’s torque that was stolen by the Roman Centurion and she must return to the future with the missing relic.

The story of Boudica is not a pretty one and PC Cast addresses the brutality that was delivered upon Boudica and her daughters in a foreword to the book.  The story of Boudica is shrouded in mystery and the unknown but on the whole, I found PC Cast’s story to be authentic and sensitive to the horrors that Boudica and her daughters experienced.  The book was really well written and I thoroughly enjoyed the descriptions of magical rituals, ancient life in Boudica’s camp and the historical battle scenes.  This is definitely a romance novel but I loved the romance between Caradoc and Alex and there were certainly no eye-rolling moments in the story.

I really would have expected the author to falter at some point while trying to balance all of the various facets of the story but I honestly couldn’t fault it at all.  It was such an exciting and thrilling book and I will certainly be reading the other three books that have been released in the series.  I have no hesitation in giving this book five out of five stars.

Buy The Avenger at Amazon.co.uk ¦ Amazon.com

Article first published as Book Review: The Avenger by PC Cast on Blogcritics.  Affiliate links are used in this post.