Ashton Nyte is no stranger to the South African music scene.  His band The Awakening first burst onto the scene in 1997 with the massively popular gothic rock cover of Simon and Garfunkel’s “The Sounds of Silence” and they have maintained a loyal following ever since.  Arguably South Africa’s most successful gothic rock act of all time, The Awakening went on to release eight studio albums between 1997 and 2009 and have found increasing success in both Germany and the United States.

Not one to sit around idle when the The Awakening weren’t recording, Nyte began to release his own solo material around 2000.  While The Awakening maintained a heavier presence leaning towards the gothic rock and darkwave genres, Nyte seemed to find more expressive freedom in his solo material and experimented with genres such as glam rock and low-fi indie rock. 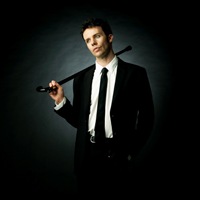 Now in 2010, Ashton Nyte makes his long-overdue US debut with his fifth studio album The Valley.  The story goes that The Awakening were on their second tour of the United States when Nyte fell in love with America and more specifically, an American.  He moved to the United States in 2009 and this is his first album to be released since making the move.  Written over five years, it is a collection of ten acoustic songs with a distinctively American or wild western theme.  Ashton Nyte is somewhat of a musical genius and this album is no exception as he has written all of the music and lyrics for the album, plays all of the instruments and all of the songs feature his distinctively baritone vocals.

Nyte’s influences shine through in his music and it is impossible to avoid drawing parallels to his idols such as Johnny Cash, Lou Reed or Nick Cave when listening to his music.  The Valley  is more than a simple tribute though as it details a very personal journey and displays a sense of great depth and reflection. 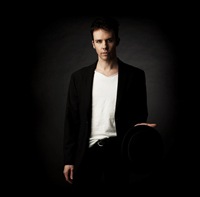 The album begins with the title track “The Valley”.  Nyte explains on the sleeve notes that this is where the journey began and that the song has been left in its ‘rough demo’ format.  The song certainly doesn’t feel unfinished as it captures the specific place in time which Nyte says that he has visited many times since.  Written in South Africa, he describes a desolate place where he “wonders if other people ever feel the need to get lost”.  It is a raw and sincere sentiment that draws the listener in.

With the tone set for the album, Nyte continues with a further nine stark and dramatic songs that speak of lost love, drugs and salvation.  “Dead Man’s Road” is one of my favourite tracks of the album.  It is powerful and melancholy in its description of meaninglessness and desolation and it features a strong alternative-country hook.  Other songs worthy of mention are “Salvation” which is a heartfelt song with strong religious imagery and “Pale Horse” with its beautiful searing guitar hook.

The first single from the album is “Jennifer”, a searching song about love lost and you can see the music video below.

If I had to choose an album that is most similar to The Valley in terms of the depth of emotion and the journey within, I would have to say U2’s The Joshua Tree.  Like The Joshua Tree, The Valley too is a description of a growing relationship with America and uses imagery of wide open spaces and vast American landscapes.  This is an album to waste away a long Sunday afternoon listening to and it is certainly an album to listen to again and again.  It stirs up all sorts of emotions and it is a long time since an album has done that.

I would certainly recommend The Valley but would also recommend giving some of Nyte’s older albums a listen.  For taking me by surprise and inspiring such emotion in me, I give The Valley five out of five stars.

Article written by me and first published as Music Review: Ashton Nyte – The Valley on Blogcritics. This review contains affiliate links.