Iconic Play “For Colored Girls” Adapted for the Screen

For Colored Girls Who Have Considered Suicide When the Rainbow Is Enuf was a play that was first performed in California in 1975.  It was written by Ntozake Shange and was essentially a collection of 20 poems performed by seven characters.  The characters did not have names and were simply known as a colour, for example, “Lady in Blue” or “Lady in Red”.  The poems dealt with incredibly intense aspects of the women’s lives such as rape, abortion and domestic violence and the Broadway production of the play was nominated for the 1977 Tony Award for Best Play.

The play has been adapted into a film produced by Tyler Perry and 34th Street Films.  Simply shortened to For Colored Girls, the film will be released on November 5th 2010 by Lionsgate and it will star Janet Jackson, Whoopi Goldberg, Loretta Devine and Thandie Newton.

Several stylistic changes have already been made in the film, most notably that the cast has grown to twenty women (perhaps to encompass each of the twenty poems) but the characters have also all been given names.

One thing is for sure, this is not going to be an ordinary film.  The colours and visualisation in the character posters and the trailer are quite vivid and exquisite and I do hope that the film embodies some of the mastery and sensitivity that the original play brought to the stage.

Eight character posters have been issued for the film and feature above. Aren’t they just beautiful?  I especially love Thandie Newton and Anika Noni Rose and certainly look forward to Loretta Devine’s performance as Juanita. You can click on any of the images for full resolution shots. 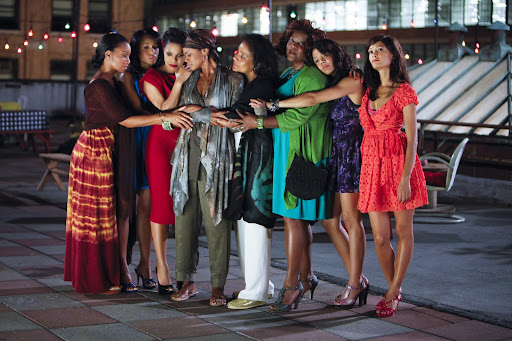 This is the official trailer for the film: