Book review: Séance for a Vampire by Fred Saberhagen 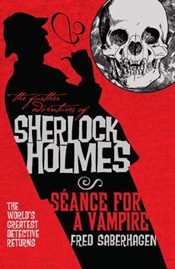 The enduring popularity of Arthur Conan Doyle’s detective Sherlock Holmes and his faithful companion Doctor John Watson is evident in the numerous film, television and literary adaptations featuring the great detective.  In the past year alone, Guy Ritchie’s film Sherlock Holmes and the three-part BBC television series Sherlock left viewers screaming for more before the closing credits ran and both wishes were hurriedly granted.  Guy Ritchie will return in December 2011 with his as-yet-unnamed sequel to Sherlock Holmes starring Robert Downey Jnr. and the BBC hit will return in autumn 2011 with a second season of Sherlock starring Benedict Cumberbatch and Martin Freeman.

Seizing the opportunity presented by renewed interest in the great detective, Titan Books have opted to rerelease Fred Saberhagen’s Séance for a Vampire.  This book is part of The Further Adventures of Sherlock Holmes series which are mashups that seek to combine the logic and deduction of Holmes with the fantasy and intrigue of the supernatural, science fiction or great historical events. Other books in the series have seen Holmes encounter ghosts, embark on a grand adventure with Theodore Roosevelt and come face to face with the Martian invasion in a War of the Worlds crossover.

In Séance for a Vampire, Holmes and Watson are called in to oversee a séance and to expose two so-called psychics by wealthy aristocrat Ambrose Altamont.  Things go drastically wrong when Altamont’s deceased daughter Louisa appears briefly before the astonished group and in the confusion surrounding her subsequent escape, Sherlock Holmes is abducted.  Now convinced of certain suspicions held by Holmes regarding a vampiric element to the matter, Watson calls on Sherlock’s distant cousin Prince Dracula to solve the mysteries of Louisa Altamont’s death and the disappearance of Sherlock Holmes.

Drawing heavily on the legends of both Sherlock Holmes and Dracula, Séance for a Vampire is an authentic period tale that has it all: pirates, executions, murder, kidnapping, revenge, stolen treasure, mesmerism, vampires and séances.  The story takes place in the aristocratic mansions of the early Edwardian era and the palaces of St Petersburg.  Séance for a Vampire is narrated in turns by both Doctor John Watson and Prince Dracula.  It is a fun-filled adventure and the idea of a mashup would be intriguing if it was done well.  The problem is that the author is not able to switch effectively between the narration of the two characters and it is often clunky and awkward.  It is easy enough for the reader to follow but the author made more than one slip where he seemed to lose his frame of reference.

Dracula’s narration was written quite authentically and his tendency to refer to his different personas in the third person was quite faithfully followed.  The difficulty is that for the whole of the book he acts quite out of character and there is little of the ultimate prince of darkness in this tale.  For his part, Sherlock Holmes is reduced to a mere shadow in this story and it would be quite difficult to judge whether his actions were in character because he doesn’t actually do anything or solve anything.  Certainly the biggest clues in the story came not from sleuthing or good detective work but from ‘secret informers’ or psychic means and so there was little deduction or logic applied on the part of Holmes.

Ultimately, Séance for a Vampire is a rather exciting and fanciful adventure but one that could easily have been written without the inclusion of Sherlock Holmes or Dracula.  What tipped the scales and made the reading of the book a bit of  chore was Watson’s repetition or, more accurately, the author’s repetition.  The author seemed to latch on to several rather ‘clever’ (read: hackneyed) analogies or descriptions in the story and he then repeated them (perhaps to ensure that the reader had noticed them the first time).  This became even clearer in the closing chapters of the book where the action moved to St Petersburg and it became clear that the author was labouring to support such a drastic change in setting.

I was initially quite open to reading a crossover novel of this sort and quite excited by the premise but this book has not encouraged me to read any of the further releases in The Further Adventures of Sherlock Holmes series.  I would certainly recommend reading the original works by Arthur Conan Doyle or Bram Stoker though as this book reminded me of how readable they were.

I give Séance for a Vampire two out of five stars.

Buy a copy of Séance for a Vampire at Amazon.co.uk ¦ Amazon.com.

This article was first published by me as Book Review: Séance for a Vampire by Fred Saberhagen on Blogcritics. I was provided with a copy of the book to review and as always, all opinions in the review are my own.  Affiliate links are utilised in this post.