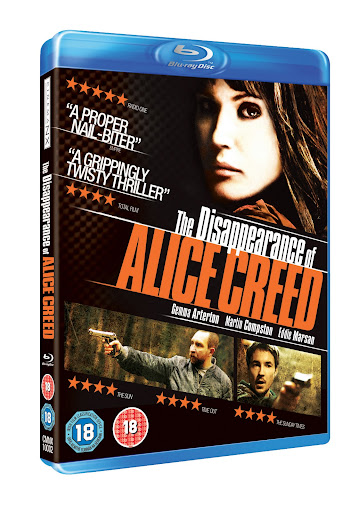 Eighteen minutes into The Disappearance of Alice Creed I had it all figured out.  The opening scenes of the film had been quite impressive as two men went through the preparations for an abduction with meticulous attention to detail.  The opening sequence featured no dialogue but introduced Marc Canham’s haunting score that permeates the rest of the film; at times chilling and melodic, the music serves to escalate the sense of tension and foreboding.  However, once the actual abduction had taken place, it seemed that a level had been reached and I guessed what would happen next.

Two men had kidnapped a young girl and what would follow would be a typical story of manipulation, romance and a dash of Stockholm Syndrome where the girl would wear down the weaker of the two men before escaping. I’m happy to say that I was absolutely wrong.  The Disappearance of Alice Creed is full of dramatic plot twists and surprises and nothing about this film is predictable.  It certainly didn’t follow the formula that I imagined in my mind.

It is difficult to give a synopsis of The Disappearance of Alice Creed as the first of several plot twists occurs very early on in the film.  It is about a kidnapping and Alice Creed (Gemma Arterton) is the daughter of a multi-millionaire.  Vic and Danny (Eddie Marsan and Martin Compston ) are ex-cons who served time together in prison and they hope that the £2 million ransom will be their big payday.  Terrified beyond belief and humiliated by the physical reality of being stripped of her clothes and tied up, Alice Creed is nevertheless not giving up without a fight.  While so many abduction films deal with the families and logistics around the ransom drop and police investigation, this is a film that focuses on just three people and their thoughts, emotions and manipulations.

In his first feature length outing as director and writer, J Blakeson delivers a dark and compelling film that will keep audiences at the edge of their seats, heart pounding in their ears for the full 96 minutes. Most of the film takes place in a tiny apartment and Blakeson and cinematographer Philipp Blaubach went for a very specific visual style.  The lighting and camera techniques convey a sense of claustrophobia, darkness and escalating unease.

Gemma Arterton is a rising star and has since starred in Quantum of Solace and Prince of Persia.  Her terror and fear were almost tangible in this film and she gives a fine performance.  It is no surprise that Eddie Marsan is absolutely convincing as the menacing and controlling Vic.  Last seen as Inspector Lestrade in Sherlock Holmes, Eddie is a regular in the British film circuit and has twice been the recipient of the British Independent Film Award for Best Supporting Actor.  The biggest surprise in the film comes from Martin Compston.  J Blakeson had been looking for a young Colin Farrell when casting the role of Danny and Scot Martin conveys that charm, passion and dark appeal perfectly.   He is incredibly easy on the eyes and expertly portrays Danny’s nervous and unsure demeanour before launching into a far stronger and more manipulative role in the film.

Depending as it does on lighting, cinematography and music to convey a taut and disturbing tone, The Disappearance of Alice Creed is certainly a film best viewed on Blu-ray.  Presented in HD 1080p video, the visual quality of the Blu-ray is excellent and the image crisp and clear.  Given the dark nature and low lighting of much of the film, there is very little noise too which is great .  This is one of the best soundtracks I have heard in a film this year and the Dolby TrueHD 5.1 sound quality on the Blu-ray really serves to deliver that sound well.  Incidentally, this is Marc Canham’s first project producing a film score as he had previously worked on video games and the soundtrack is available on CD and download.  It features the fantastic Cathy Davey song “Holy Moly” that plays in the closing credits.

The extras on the Blu-ray include a “Making Of” featurette which explains how the actors were chosen and features their original casting videos.  I quite enjoyed that and enjoyed the cast and crew interviews too.  Other extras include “Selected Storyboards”, an “Extended Scene With Commentary” and the UK and US trailers.  I must say that the US trailer was much better and gave far less away about the story than its UK counterpart.

The Disappearance of Alice Creed is a dark, minimalist thriller that maintains an unrelenting degree of tension from the opening sequence right to the closing credits.  It features several plot twists and surprises and will keep you guessing right up until the end.  It is technically a fine film and features great cinematography and music and I would give it four out of five stars.  While it can be frightening and violent, it is entertaining and not overdone and I would recommend it to quite a wide audience.

Buy The Disappearance of Alice Creed at Amazon.co.uk ¦ Amazon.com

Article first published as Blu-ray Review: The Disappearance of Alice Creed on Blogcritics.