Wow.  What a difference six weeks can make!  When I began posting the Top Ten Songs on My iPod back in May, I had no idea that I would discover a band that would change everything.  Six weeks ago, I went to Exit Festival in Serbia and I saw the most incredible band live.  That was Kawasaki 3P and you can read about the concert in my Exit Festival 2010 review.

I bought the two Kawasaki 3P albums when I returned from Serbia and in six short weeks, I have listened to those two albums more than I have listened to Cranes, Klaxons or The Faint in the past five years.  I kid you not! Check out my Last.fm page: 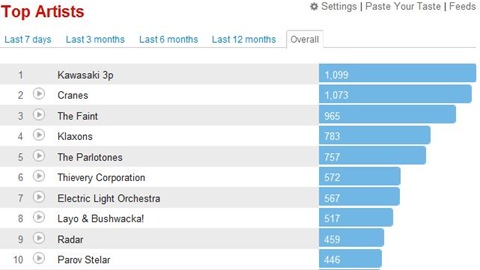 I think it is safe to say that I am obsessed and I haven’t experienced this level of obsession with a band in years.

“Niskarastaman” was my favourite song last week and I have taken the trumpet section from 2.41 to 3.24 and made it the ring tone on my phone.  Normally I’d be somewhat embarrassed admitting this level of obsession but really, you’d just have to see Kawasaki 3P live to understand why.

Kawasaki 3P are an  punk/ska band from Zagreb, Croatia.  Both their 2003 album Kawasaki 3P and their 2009 album Idu Bugari won Porin awards for Best Alternative Album.  The band has eight members with three members on trumpet and they have the most incredible brass sections in their songs.