With the return of the dance punk genre and the rise of new rave, bands such as Klaxons, CSS and Does It Offend You, Yeah? have experienced dizzying levels of success. Drawing inspiration from the indie rock, disco and new wave genres, these bands have managed to sound loud, fresh and exciting.  Even established masters like Groove Armada have given a definite nod to slightly retro sounds in their latest work as evidenced on their critically acclaimed album Black Light.  While Klaxons and Groove Armada continue to delight and excite, many bands have simply sounded old and tired and I have become increasingly selective when choosing new acts in the genre.

It was with some interest then that I picked up the self-titled Cheese People debut. They claimed to have been isolated from the mainstream and to have based their music on acts such as Prodigy and Gloria Gaynor but they were increasingly likened to CSS, Datarock and New Young Pony Club. 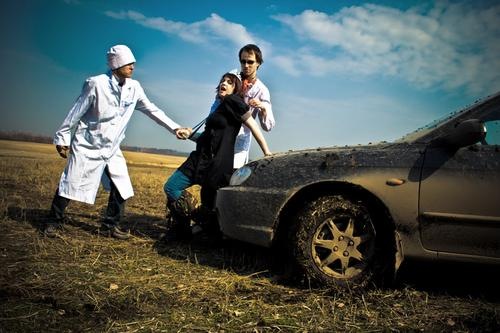 Hailing from the Russian city of Samara, Cheese People have been playing together since 2003. They started off playing in basements but their brand of manic pop has seen them become Russia's most popular disco punk band.  Vocalist Olga Chubarova and guitarist Anton Zalygin wrote and recorded most of the songs with the help of producer Shipovnic.

The album begins with the funky disco beats of "Stroitel". Far from being a simple retro tribute, the song soon explodes into electronic and synthetic beats and introduces Olga's distinctive meowing vocal style.  For a band supposedly cut off from the modern world, Cheese People are certainly achieving most of the new rave standards. Next up is "Ua-A-A", my favourite song on the album.  The sardonic vocals and menacing beats make this a really catchy feminist anthem and I was most pleased to see that the album included an extended version of the song at the end.

"Catch U" begins as a catchy pop tune that sounds like a more accessible CSS in places. The song is saved from mediocrity as it explodes into grinding guitars and a catchy refrain. "Boombasters" is funky filler featuring rather absurd lyrics from Anton. It is a silly song and certainly more about the music than the meaning. It makes me realise that Cheese People must be incredible live though. 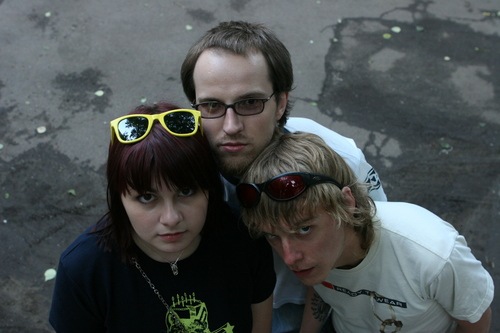 I’m surprised, actually, that more comparisons haven’t been drawn to acts like Le Tigre or feminist pop.  The middle of the album certainly leans towards those acts as Cheese People depart from the new rave sounds.  "Moon" is a lyrical song with a rough, garage sound to it and features Olga’s drawling riot grrrl-esque vocals and "Wake Up" is similar in sound and a catchy anthem..

"O-Djaz" is simply a jazzy, funky interlude and "Tibet+6++" follows with a haunting, experimental sound. "Down & Down" features Anton on lead vocals again with Olga supporting with wonderfully Eastern sound vocals. It is quite a laid back song and certainly one of my favourites on the album.

“Open My Eyes” is an upbeat and energetic return to electronic sounds and Olga’s sardonic vocals while “Eats Your Popcorn” is just silly.  The album closes with “I Hate This Sound” which has all the hallmarks of a classic dance anthem.  It is a surprisingly ambitious and multi-layered song to find at the end of the album and it is a great final track.  Some versions of the album also feature the fabulous extend Gari remix of “Ua-A-A”.

After listening to this album, I could certainly imagine seeing Cheese People on the same line up as CSS, Klaxons or New Young Pony Club.  It seems incredible that Cheese People emerged from a state of relative musical isolation to release such an authentic dance punk album.  This is a rich album with a nod to several musical styles though and perhaps that isolation allowed them a little more freedom in their musical expression?  One thing is for sure though: geographical borders and language barriers are beginning to mean less and less and I imagine that I’ll be listening to far more Eastern European music in the months to come.

Cheese People is an energetic, fun and unique album and a fine introduction to this talented band.  I give the album four out of five stars.