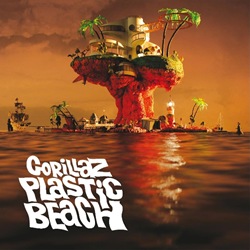 Damon Albarn could have done two things when his reign as the King of Indie Music ended with Blur dissolving amidst creative differences and Graham Coxon’s alcoholism.  He could have matured and followed in the footsteps of great artists such as David Bowie, bringing out clever and well received albums for the next twenty years or so.  Or he could have become the Peter Pan of the popular music realm and dreamt up a virtual band that runs around the world kidnapping journalists and selling arms to third world dictators in order to raise money to make albums.  He chose to do the latter.

Gorillaz is a band made up of four animated characters drawn by Tank Girl creator Jamie Hewlett.  There is Murdoc Niccals on bass guitar, Noodle on guitar and vocals, Russel Hobbs on drums and percussion and my personal favourite, 2D on lead vocals and keyboards.  They are officially the most successful virtual band ever (which is not hard considering they are competing with Crazy Frog) and have sold over 15 million copies of their first two albums Gorillaz (2001) and Demon Days (2005).  They are most famous for the genre-defying hits such as “Clint Eastwood”, “19-2000”, “Dirty Harry”, “Feel Good Inc” and “Dare” and they return in 2010 with their third studio album, Plastic Beach.  Damon Albarn and Jamie Hewlett are pretty much the only constants in the Gorillaz line up but the cast of collaborating artists is impressive once again and includes great names such as Mos Def and Bobby Womack. 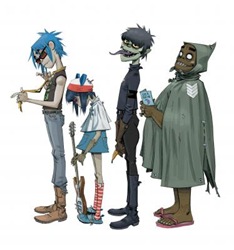 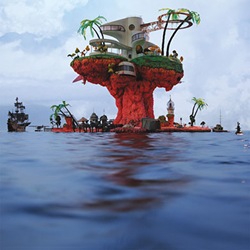 The album begins with the instrumental “Orchestral Intro” and you hear the sounds of waves and seagulls as you head out to sea.  You’re met on the Plastic Beach by none other than Snoop Dogg as he tells you about how pollution in the ocean has created the island in “Welcome to the Plastic Beach”.  This is a laid back song with a classy vibe.    Grime rappers Bashy and Kano, and The Lebanese National Orchestra for Oriental Arabic Music are up next as the tempo picks up for “White Flag” and Albarn’s increasing interest in African and Arabic music shows through.  This is the first of my favourite songs on the album, the type that you’re inclined to play over and again on repeat.  Hip-hop is not my genre of choice but the beats in all of the songs so far are enough to enable this album to cross genres and appeal to a wide audience.

Themes of pollution and ecology continue with “Rhinestone Eyes” which is a return to that classic lazy Gorillaz sound that we first heard in “Clint Eastwood”.  This song has a wicked bass line and backing vocals that come up to the chorus and is definitely the best song on the album.  The legendary Bobby Womack and Mos Def make their entrance next with “Stylo” which is the first single from the album.  This laid back and stylish song has the most incredible video featuring Bruce Willis.  We unfortunately can’t embed the whole video but check out the trailer below.

“Superfast Jellyfish” is the next single from the album and is due out for release on 9 May 2010.  Featuring Super Furry Animals’ Gruff Rhys and De La Soul, it starts off with a wonderfully retro sample advertising microwave breakfast and has a funky, cheeky beat.  It is a silly song and certainly a load of fun.  “Empire Ants” starts off really slowly with a piano background and beach vibes as Damon Albarn (as 2D) describes the banality of every day life.  The song then explodes into an electronic carnival of sound as Little Dragon enter to state how our dreams of a better life simply work the machine.  This is a brilliant song and is another one to play on repeat.  “Glitter Freeze” features The Fall’s Mark E. Smith and it has a driving, chaotic beat.  Like “Empire Ants” before, it moves the album closer to the dance and electronica genre and it is a strong, energetic song. 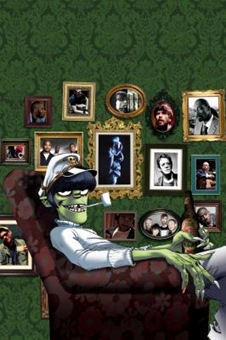 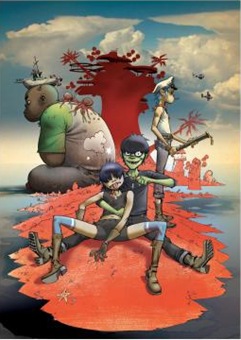 “Some Kind of Nature” features the superstar Lou Reed.  This song is a break from the somewhat lunatic beats of the previous two songs but there is still something about it as Lou’s vocals are distorted.  The song is about the distortion of nature and how people become phony and nothing lands up in the form that it originally was.  “On Melancholy Hill” is intended to be the third single on the album which is strange as I think it is one of the weaker songs on the album.  It is definitely poppy and may appeal to the masses but I think it doesn’t really do much.  There is a post-apocalyptic feel that comes through in the album and this is increased by the cartoon landscape of the Plastic Beach and the feeling of being stuck in a video game.  With its mention of ‘the light of plasma screens’ and space and broken love, “Broken” continues this theme with its slow, eerie sound.

“Sweepstakes” picks up the tempo again and features Mos Def on his second appearance on the album and Hypnotic Brass Ensemble.  With an insistent almost menacing beat the song is about how everyone is a winner when in reality, nobody is winning at all.  This song is an absolute winner!  Once again, it is a definite rap song but it is funky enough to appeal to a wider audience.  Damon Albarn denied that this album was a green album but the title track “Plastic Beach” definitely refers to the floating landfills in the oceans when it speaks of ‘It's a Casio on a plastic beach, It's a Styrofoam deep sea landfill’.  This is a trippy song that leads into the equally trippy “To Binge” featuring Little Dragon again.  This song features perhaps the best line on the album ‘That shattered feeling, well, the cause of it's a lesson learned’. 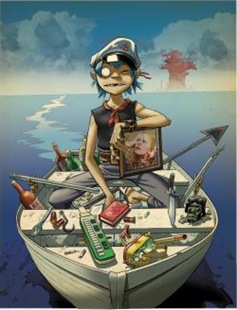 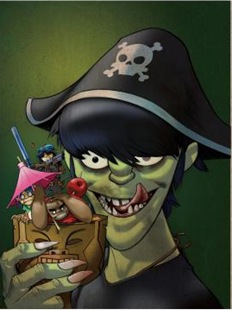 "Cloud of Knowing” features the last collaboration on the album with Bobby Womack and sinfonia ViVA.  This is a really downbeat song but Bobby Womack’s vocals make it quite ovely.  He sings of himself as if he is up in the sky looking down and wondering when he will be close to his love again.  The album ends with the cheeky and upbeat “Pirate Jet”.  This is an optimistic song yet speaks of leaving the taps running for a hundred years.  It pretty much sums up the whole album and then all too soon, it ends.

Plastic Beach is a fantastic album and I sincerely hope that the rumours about this being Gorillaz’ last are false.  It is a crazy and inventive album that should appeal to younger audiences without being condescending but certainly appeals to the child in me.  Simply put, it is a load of fun and will certainly occupy a valued spot in my iPod over the year to come.  You can visit the Gorillaz website and play their new online game Escape To Plastic Beach for more mind bending fun. 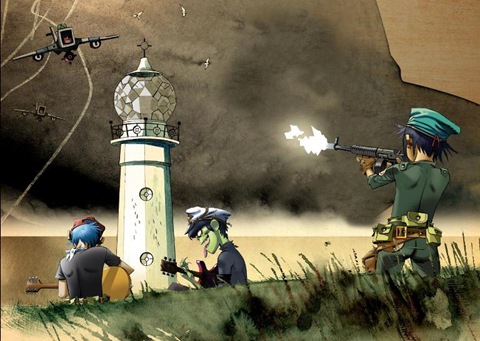 For being an absolute gem of an album, I give Plastic Beach 4.5 stars

This review first appeared on Blogcritics.org.  I was given a copy of the album to review and all opinions here are absolutely my own.