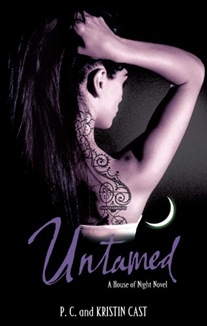 Untamed is the fourth book in the House of Night series and the books opens with Zoey having to deal with the consequences of being disloyal to her friends and cheating on her boyfriends.  The problem is that unless Zoey can gain back the trust and support of her friends, she’ll be in no position to deal with the next challenge that awaits her.

And that challenge?  Oh, that would just be saving the world from the most feared of the Cherokee witches, Kalona and the Raven Mockers.

In previous House of Night reviews I wrote about how the authors had dragged the story out over several books by using terrible cliff hanger techniques at the end of the books.  Not only is that incredibly frustrating, it also tends to make the story a bit stale as it can be hard to distinguish the various books from each other.

Although Untamed ends with a massive and rather unforgiveable cliff hanger, the story is definitely taken up a notch by the introduction of the fascinating Cherokee legend of the Raven Mockers.  The authors also give Zoey a bit of a character overhaul and she is far more likeable and worthy of respect in this novel than she was in the previous three books.

So I land up giving the book a paltry three stars out of five as the story is really exciting but the book just ends right in the middle of all the action again.  I’ll keep on with the series and I’m hoping that overall, I’ll be able to give the  whole series a better score.  Actually, having to even consider that makes me feel kind of cheated.  It’s not as bad as Breaking Dawn where I opted to read Cleolinda's live blog summaries rather than the book itself but it’s not far behind either.