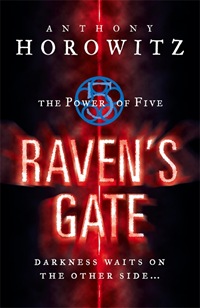 Raven's Gate was one of the first books I read after I had ploughed through both the Harry Potter and His Dark Materials series.  It was around this time that I started properly reviewing books.  Given that Horowitz became one of my two favourite authors (the other being Garth Nix), I have decided to reread and properly review all of the Horowitz and Nix novels that I read in that first year.

It is difficult to write an introduction to Anthony Horowitz without resorting to terms like “prolific” or  “massively popular” for these are the precise terms that come to mind when you consider his impressive body of work.  Horowitz has written over fifty books, has adopted Agatha Christie's Hercule Poirot novels for television and is also the creator of well known television series such as Foyle’s War and the Midsomer Murders.

Horowitz might be best known for his Alex Rider series which features the adventures of a fourteen-year-old superspy but he is most proud of his Power of Five series.  Known as the Gatekeepers in the US, the series begins in an English town called Ipswich with Raven’s Gate.

Matt Freeman is a fourteen-year-old orphan who gets into trouble with the law in the opening chapter of Raven’s Gate and is sent off to a remote village in the Yorkshire countryside for rehabilitation.  Officially, he is part of the L.E.A.F. project (Liberty and Education Achieved through Fostering) but unofficially, he becomes a mere servant to his foster parent Jayne Deverill and is forced to help out on her farm.

As wretched as his daily life might be, Matt realises that something quite sinister is going on at the farm and that something is not quite right with Mrs Deverill.  When Matt sees lights and hears whispers coming from an abandoned nuclear power station, he becomes more suspicious and realises that somehow, all of the local villagers of Lesser Malling are involved.   Matters come to a head when it seems that everyone who tries to help him lands up dead.  Can he escape before he becomes the next victim?

Raven’s Gate is a fantasy supernatural thriller that will have your heart racing as you rush to finish the book.  In fact, the pace is so fast that it is hard to remember sometimes that this is a book and not an action packed blockbuster film.  Anthony Horowitz wanted to take the classical fantasy genre out of Narnia and Middle Earth and has brought witchcraft, clairvoyance, magic and the notion of an ancient evil to modern day England.  It is easy to see why he is so proud of this series as they will appeal to both adults and the young adults that they were written for.

Raven’s Gate is the first book in a five-part series and Matt is the first of five children we will meet who will eventually save the world.  This series is certainly recommended to lovers of fantasy fiction and for people looking for an alternative to the ever more prevalent vampire books.