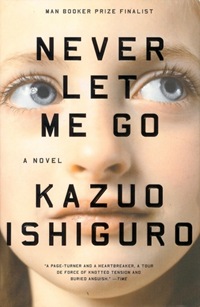 As a reviewer, I would say that I am capable of writing both good and bad reviews. Sometimes I completely throw objectivity and professionalism to the wind and let my inner fan take over. I’ll wax on about how much I love an actor or adore a band and it is at those times that this blog most resembles that which it was originally intended for: a scrapbook in which to record all of the music, film, television and books that I consume. Over time, however, I have come to realise that readers hope for some semblance of objectivity and fairness when reading reviews and so, as much as possible, I try to present reviews in such a way that readers can make an informed decision on whether to purchase or consume the item themselves.

In reviewing Never let Me Go by Kazuo Ishiguro, I am presented with a different dilemma. For me, this book was so sad and depressing that I find it almost painful to write about it (and indeed, it has taken me a week to get this far with a review). I’ve tried to dissect why this might be so. Never Let me Go is an incredibly well-written book and Kazuo Ishiguro is both a master at suspense and at leaving breadcrumbs for his readers to follow. I love his writing style and after loving When We Were Orphans, I am now keener than ever to read The Remains of the Day. I love this type of book too. As a rule, I love all dystopian novels or those that describe an alternative present, whether they are of the classical science fiction genre or the modern literature of Margaret Atwood or George Orwell. I’ve always loved books set in schools (the Harry Potter franchise being the best, but not first, example of this) and one of my favourite books of all time was Margaret Atwood’s Cat’s Eye which described a specifically painful childhood.

At the end of the day, I would have to say that Never Let Me Go struck a raw nerve in me and the descriptions of a disadvantaged childhood wrought with childish manipulation and misguided ideas of propriety left me feeling quite cold and empty. It is obvious that in some way it mirrored too closely the interpersonal relationships and circumstances of my own childhood (I have said before that I have not one positive memory from primary school in South Africa) and indeed, a book must be remarkable to generate that level of reaction in any reader, must it not?

Never Let Me Go is about a world where cancer has been cured and finding donor organs is no longer a concern of the general population. This is a world that is far from perfect though and such success has been brought about at a terrible human cost. I don’t want to give any of the actual story away and it wouldn’t be fair to give you the whole slice of bread right now so forgive the vagueness please (that was a really bad reference to Ishiguro’s breadcrumbs, by the way).

The book is narrated by Kathy who describes growing up in a rather unusual boarding school. She describes the friends she makes, the games they play and how they come to love, manipulate, depend upon and ultimately ruin each other as their lives remain entwined until their deaths. These are individuals who live a pre-planned, second-hand existence yet somehow manage to eke a childhood out of the most appalling and neglectful conditions.

It is certainly a book that will generate conversation amongst friends and book clubs and indeed, the other participants in my book rated it highly on readability, enjoyment and stimulating conversation. I'm glad I read it now and not after reading (and hopefully enjoying) his other books but my total score would be two out of five stars based solely on it actually being a well written imaginative book.

Never Let Me Go has been made into a film starring Carey Mulligan, Keira Knightly and Andrew Garfield and with Andrea Riseborough as Miss Lucy.  I must say that I believe they have cast Garfield and Riseborough perfectly in their roles as Tommy and Miss Lucy.

I’m a fan of Andrew Garfield and loved him in the Red Riding trilogy and in Boy A.  The film is in post-production and is due for release later this year.  I will most likely go see it just for Andrew.