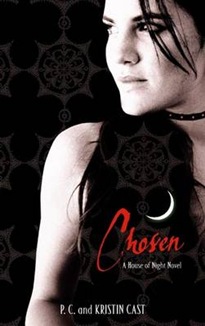 After being thrilled to bits by  Marked and more than a little  disappointed by the sequel Betrayed, I decided to take a chance on the next book in the House of Night series because it had received good reviews.

The House of Night is yet another series in the ever popular vampire genre.  What makes this series different is its references to elemental magic, ancient Cherokee traditions and a focus on strong, powerful women.

The first book in the series Marked introduced us to Zoey, the protagonist of the series as she realises she is a vampyre fledgling and she starts at the House of Night vampyre finishing school.  In Betrayed, Zoey must deal with an evil force within the school that is killing human teenagers but the book ended right at the pinnacle of all the action and it was so frustrating!

Chosen begins immediately after the events of the previous book.  Without giving away the story too much, I will say that Zoey finds herself torn between three men and forms an alliance with her former enemy.  The authors have really written the most horrible lead character as Zoey proves herself to be arrogant, selfish and disloyal with a severe case of self-righteousness.  What saves this book and made me decide to pick up the next one in the series is the explosive finale which had me racing to the end of the book.

At the end of the day, the House of Night series is a fun, imaginative series that does breath new life into the vampyre genre.  It is a pity that the authors have dragged the story out over so many books and used cheap cliff hanger techniques when the story could have run just as effectively by finishing up one story arc in one book.

I certainly wouldn’t recommend reading this book as a one-off and this is a series that you do have to read in a strictly chronological order.  But it is fun and easy to read and the books are great at passing the time and reading on the train.  Would I recommend that you start the House of Night series at all?  Yes, I would.  Just maybe borrow the books from the library rather than spending good money on them.

I give the book at strict passing grade at 2.5 stars.