Doctor Who: The Daleks (part 1)

The second story in the first season of Doctor Who aired on the BBC between 21st December 1963 and 1st February 1964.  The story arc is known as The Daleks and introduced what would become the Doctor’s greatest foes.  I find it highly amusing that my spell check is underlining the word Daleks as these hideous and terrifying creatures were such a great part of my childhood! 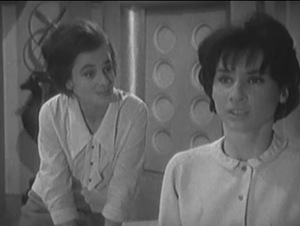 The TARDIS lands on what appears to be a dead planet and the crew encounter a petrified forest.  The Doctor sabotages the ship so that he can force the crew to explore a city that they see in the distance.

Things we learn in this episode: Food on the TARDIS comes from the TARDIS nutrition machine in the form of nutrition bars that taste like meals. 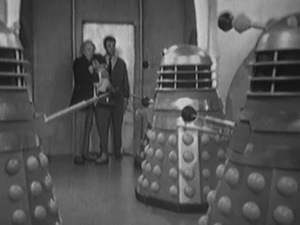 The crew learn that the planet is not uninhabited as they are captured by the hideous Daleks.  They begin to suffer from radiation sickness and in a bid to get hold of the radiation medication, the Daleks send Susan on a mission to retrieve some from the other inhabitants of the planet, the Thals.

Things we learn in this episode: The Daleks and the Thals engaged in a neutronic war which left the survivors of both races mutated.  The Daleks are confined to their pepper pots travel machines and cannot leave the bounds of their city.

The Daleks of the 1963 show are as terrifying and creepy as they have remained throughout the history of the show.  The only thing preventing me from retreating behind my sofa was my dedication in writing up this post. 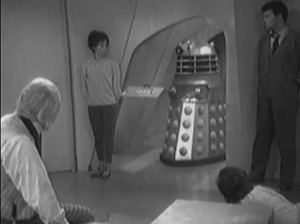 Susan runs into the Alydon one of the Thals and it turn out that they are not disfigured like the Daleks but are a beautiful, perfect race of people.  Alydon gives Susan additional radiation medication.

The Daleks start a grand plan to trick The Doctor and the crew into “a false sense of security” by giving them food and refreshments so that they can help lure the Thal to the Dead City.

The prisoners come up with an ingenious plan to hijack one of the Dalek’s travel machines.

Things we learn this episode: The Daleks were teachers and philosophers before the war with the Thals.

The Daleks are able to move using a form of static electricity and the base of their machines requires contact with the floor.

The Daleks are slimy little creatures not unlike snails once removed from their shell. 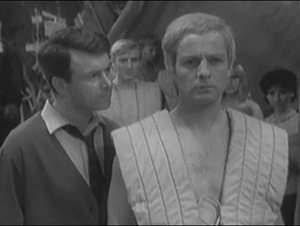 The plan to hijack one of the machines is successful and the TARDIS crew escape.  As they make their escape, they witness the Daleks ambushing the Thals and they escape with the surviving Thal.

The crew are just about to make their way back to the TARDIS when Ian realises they left a vital TARDIS component back down in the Daleks’ city.

Things we learn this episode: The Daleks are evil, scheming and vengeful.