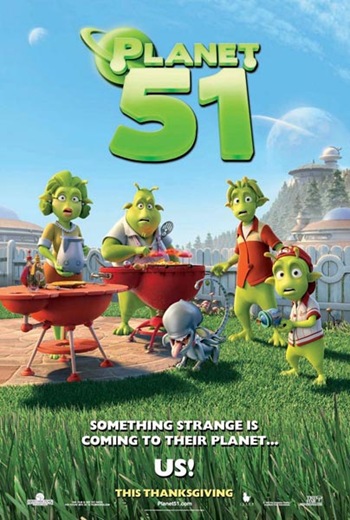 We took a chance yesterday and turned up at our local cinema without knowing what was showing beforehand.  As it turned out, there were only two shows starting around the time we arrived and as we had already seen New Moon, we landed up going to see Planet 51. 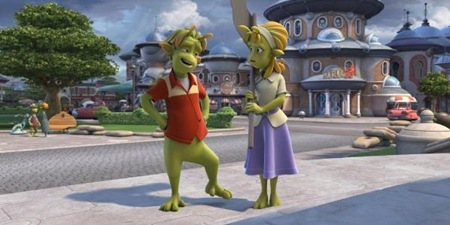 As a lifetime fan of The Jetsons and a lover of the futuristic imaginings and alien fascination of the 1950s and 1960s, I was immediately taken with the film.  I just loved the art deco buildings, the retro outfits and the 1950s music.  They had a classic bowling alley too and hover vehicles that matched classic 1950s car models.

I enjoyed the pop culture references and the slightly off-colour jokes that kids are unlikely to catch.  I liked the reversal whereby humans are the aliens invading another planet. 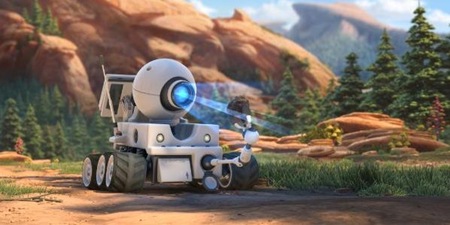 In fact, there were so many levels on which the film was cute and funny.  There was a whole side story about Rover, the explorer robot pictured above.  Trust a robot to be more interested in rocks than life forms and to send back data suggesting the planet is uninhabited! 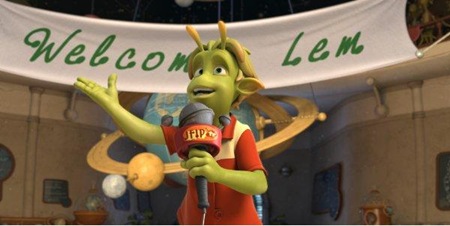 I honestly giggled and sniggered my way through the whole film but alas, The Husband didn't like it at all.   I didn’t find the film was overly moralising which I really appreciated and I didn’t find the romantic component to be unrealistic either.  Rather, it was a simple and casual film aimed at young children but which would provide entertainment for adults too.

The film got 21% from the critics at Rotten Tomatoes and 72% from the community.  Given that Where The Wild Things Are is being released in the UK on 11 December and James Cameron’s Avatar on 17 December and Sherlock Holmes on 26 December, I’d say get this one on DVD.

For 91 minutes of giggles and laughter, I give the film four out of five stars.