Doctor Who: An Unearthly Child

On Saturday 23 November 1963, Doctor Who exploded onto British television screens with the first episode of the story arc named "An Unearthly Child”.  The arc consisted of four episodes. 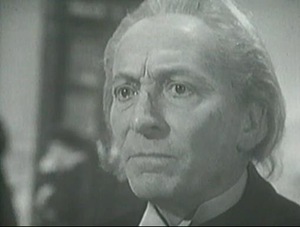 In this episode we meet two school teachers who are concerned about a strange but profoundly knowledgeable student called Susan Foreman. Susan appears to be a normal teenager who listens to music and follows the fashions of the day but when the teachers try to follow her home, they find that she has slipped into an old junkyard.

We meet the First Doctor for the very first time and he is an arrogant and cantankerous man.  The characters enter into the TARDIS which looks like a police box but is much bigger inside than it appears from the outside.

After a heated discussion with the teachers, the Doctor decides to warp to another time and place as he does not trust that the teachers will not expose him.

Things we learn in this episode: Susan states that she was born in another time and she already hints towards having seen the London of the future.

The teachers struggle to believe it as they come to realise that they are obviously stuck far in past.  It is in fact 100,000 BC, the Stone Age.  The Doctor is kidnapped by cavemen and the group is caught up in the political wrangling of a tribe that has lost the ability to make fire and keep themselves warm.

They are taken prisoner and kept in the Cave of Skulls.

Things we learn in this episode: The TARDIS as a police box: The Doctor and Susan are both concerned that the TARDIS is still a police box and that it hasn’t changed to blend it with its surroundings as it usually does.  It seems the TARDIS has become stuck in this form.

“Doctor Who”: Barbara Wright calls The Doctor “Doctor Foreman” assuming he has the same surname as Susan.  Ian Chesterton replies, “That’s not his name.  Who is he? Doctor Who?”

The Forest of Fear

The group are freed by the widow of the previous leader as she believes fire to be a bad omen and she wants to prevent them making it for the tribe.

They escape into the forest but are pursued by two of the cavemen.  An animal attacks their pursuers and despite The Doctor’s objections, Barbara insists on helping him.

Things we learn in this episode: The Doctor is willing to put his own safety over the safety of others.  Is this the first sign of the Doctor’s sense of self-importance and destiny?

It is possible to communicate meaningfully with cavemen if you speak slowly and leave verbs out of your sentences.  I must try that next time I’m in France.

The group are captured again and involved in more of the power struggle.  After finally providing fire for the tribe, the group escape being assimilated into the tribe and make it to the TARDIS.

Things we learn in this episode: As the TARDIS dematerialises, The Doctor tells the teachers that he is not able to take them back to 1963 as he cannot accurately control where or when the TARDIS goes.  He claims that he has insufficient data an admits to Ian that he has no idea where they will end up.

I think that the set and props were amazing for 1963 and the concept of the cavemen as intelligent human beings with hierarchical structures was interesting.  It is jarring to The Doctor as such a grumpy old man but I’m looking forward to gradually connecting him with The Doctor that we know and love today.

There is no point giving the early shows a star rating or anything of the sort because these early episodes have to be appreciated for how progressive and exciting they must have been at the time and also for the background and history they provide.