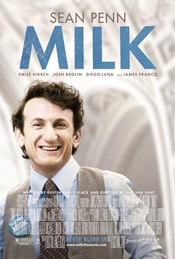 I had the opportunity to watch Milk recently.  What an absolutely phenomenal film!  Sean Penn absolutely deserved his Best Actor Oscar for his role in this film.  He was just great.  In fact, Sean Penn just gets better and better each time I see him.

Milk is the true story of Harvey Milk, California’s first openly gay elected official.  This was a man who believed in gay rights and fought vehemently against repressive legislation and initiatives such as Proposition 6 which sought to bar gays, lesbians and even their supporters from working in California’s public schools.

The film features news footage from the period and features the hatred and vitriol that Anita Bryant spewed during her campaign against gay rights.  At the end of the film they also show footage of Harvey and all of his friends and you can see how well done the costumes and styling in the film were because the cast all looked like dead ringers for the people they portrayed.

This is a beautiful, moving and important film and I would recommend this film to absolutely everyone.

Apart from Sean Penn’s Oscar-winning role, there are fantastic performances from James Franco and an almost recognisable Emile Hirsch.  I’m actually keen on watching this film again now – it was that good.